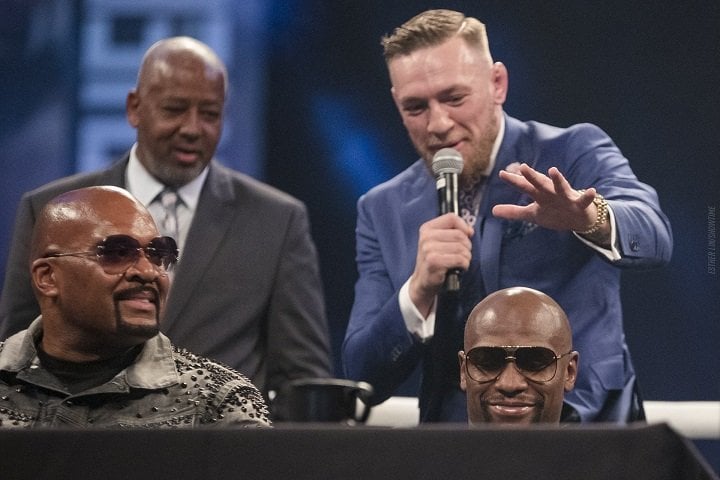 Four days of a contentious international world tour came to a fitting close on Friday when global superstars Floyd Mayweather and Conor McGregor faced off for the final time on their three-country excursion at London’s Wembley Arena.

After 98 hours, over 14,000 totaled miles traveled, four sold-out venues, and more than 50,000 raucous fans in attendance, the Mayweather vs. McGregor World Tour has concluded.

What follows next before the boxing legend and UFC superstar meet Saturday, Aug. 26 on SHOWTIME PPV live from T-Mobile Arena in Las Vegas? Forty-three days of grueling preparation, speculation and pundit analysis as the world’s best combat fighters continue their collision course toward an event that has become a global phenomenon.

In front of a capacity crowd at a famed venue that has hosted acts ranging from The Beatles to the Olympic Games, Mayweather and McGregor capped off nearly a week of intense gamesmanship that grew with each tension-filled face off.

“You’re the student and I’m the teacher,” said Mayweather, a once-in-generation talent who has dispatched at least five future Hall of Famers en route to an unblemished 49-0 professional record. “On August 26, I’m going to take you to school.”

McGregor, an unrivaled figure in mixed martial arts who has transcended his sport to become a must-see attraction, answered, “In six weeks, I’m going to sleep this fool. And when I sleep him, I’m going to bounce his head off the canvas as well.”

The World Tour may be over, but the show has just begun.

Floyd Mayweather vs. Conor McGregor is a 12-round super welterweight matchup pitting the legendary boxer Mayweather against the all-time MMA great McGregor in an unprecedented event that takes place Saturday, Aug. 26 at T-Mobile Arena in Las Vegas. The event telecast is produced and distributed by SHOWTIME PPV.