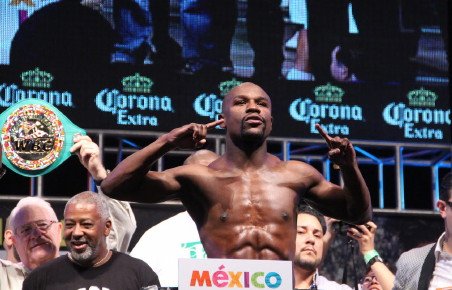 (Photo credit: Sumio Yamada) Tonight’s “Mayhem” fight card at the MGM Grand in Las Vegas, Nevada has a number of the A-side fighters as huge, huge favorites to win starting with the headlining fight between WBA/WBC welterweight champion Floyd Mayweather Jr (46-0, 26 KOs) vs. Marcos Maidana (35-4, 31 KOs). Mayweather is a whopping 12-1 favorite to defeat Maidana, according to Fightnews. I don’t know about you but 8:1 odds are pretty steep.

The most troubling fight on this card is the clear mismatch in the co-feature bout between WBC super bantamweight champion Leo Santa Cruz (27-0-1, 15 KOs) and the fringe contender that he’s being matched against from the bantamweight division named Manuel Roman (17-2-3, 6 KOs). Santa Cruz is a 50:1 favorite to defeat the #13 WBC Manuel Roman.

If this is a fight that is being aimed at fans without any knowledge about Santa Cruz, then you can kind of understand the match-making for the fight. But other than that, it seems pointless for a fighter as good as Santa Cruz to be put in with a guy ranked as low as Manuel is in a division below Santa Cruz’s super bantamweight division. This fight reeks of Danny Garcia vs. Rod Salka type match-making, and it’s disappointing to say the least.

In one of the more competitive fights on tonight’s “Mayhem” card, IBF lightweight champion Miguel Vazquez (34-3, 13 KOs) will be defending his title against Mayweather Promotions fighter Mickey Bey (20-1-1, 10 KOs). Vazquez is only a 3:1 favorite to win. Still, it’s hard to see Bey as being deserving of a title shot when he was knocked out recently by John Molina. If anyone deserves a title shot, its Molina, who is also fighting on this card against 34-old old veteran Humberto Soto (64-8-2, 35 KOs).

Bey gets knocked out by Molina but still gets a title shot, whereas Molina has to settle for an aging former two division world champion in Soto, who doesn’t look like he belongs at light welterweight. Soto was a good fighter in his day at super featherweight and lightweight, but he doesn’t look nearly the same fighter at 140. Molina is a 2:1 favorite to defeat Soto.

Coming off of 2 consecutive knockout losses, Alfredo Angulo (28-4, 18 KOs) is surprisingly a 4:1 favorite to defeat James De La Rosa (22-2, 13 KOs). Angulo looked weight drained for his last fight against Saul “Canelo” Alvarez in their catch-weight fight at 155 pounds last March. But at Friday’s weigh-in, Angulo still looked drained. 155 to 162 really isn’t that big of a deal, and I won’t be surprised if Angulo is as listless tonight against De La Rosa in their catch-weight fight at 162 than he was at 155 against Canelo.