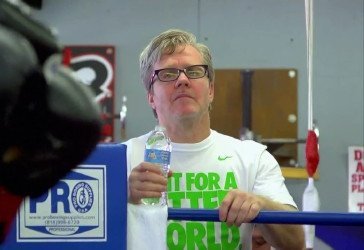 Manny Pacquiao’s trainer Freddie Roach thinks WBA/WBC welterweight champion Floyd Mayweather Jr (46-0, 26 KOs) has deteriorated to the point where now even Amir Khan can beat him. Roach is saying this week that Khan’s speed would be too much for the 37-year-old Mayweather now.

Roach thinks that Mayweather can no longer move around the ring like he once did, even though he showed excellent movement a year ago in defeating Saul “Canelo” Alvarez by a 12 round decision in one of Mayweather’s biggest wins of his career.

“I’m convinced his legs are shot,” Roach said via theGuardian.co.uk. “Look at the first four rounds of the first [Maidana] fight. Great fighters in later years often go to the ropes as they slow down, but he got into trouble there. He was under a lot of pressure. Mayweather at his best would never fight like that.”

If you recall, Mayweather did say before the Maidana fight last May that he was going to give boxing fans a gift by choosing to trade with him rather than use movement to out-box him. Since Mayweather did give fans a hint of how he was going to fight Maidana ahead of time, you have to conclude that he chose to stand and trade with Maidana largely for that reason more than anything else.

“It is his [Khan] speed that would be the difference. He’s just too fast for Mayweather,” Roach said.

Khan does have more hand speed than Mayweather at this point in his career. Khan would give Mayweather some problems for sure if that fight gets made, but it’s not as if Khan hasn’t been exposed already by guys that time him. Timing beats speed, as we saw in Danny Garcia’s knockout win over Khan in 2012.

The thing that makes Khan really tough for Mayweather now or any fighter in the welterweight division is the holding and pushing that he does now. If you look at Khan’s last fight against Luis Collazo, he was clinching after almost every punch. He also used a lot of movement.

These spoiling tactics would make it tough for Mayweather more so than just Khan’s hand speed. If a referee lets Khan grab, shove or pull down on Mayweather’s head for 12 rounds, then he’s not going to have much of a chance to get his shots off. The speed really doesn’t matter so much if Khan is simply grabbing Mayweather 24/7.