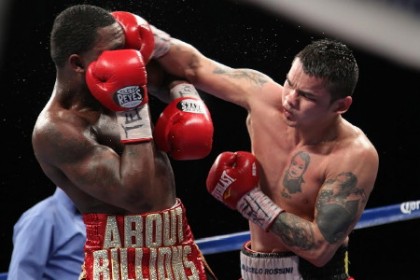 The 30-year-old former 140-pound world champion was supposed to be a “test” for rising star Adrien “The Problem” Broner’s budding career. And test him he did, right from the opening bell.

Broner was stunned in the first exchange and Maidana poured it on. He overwhelmed the champion for two straight rounds, scoring a knockdown in the second and forcing Broner back on unsteady legs.

By the third, Broner settled into his game and the fight was on.

“High drama in the Lone Star State,” bellowed SHOWTIME Sports play-by-play announcer Mauro Ranallo in the middle rounds of what is sure to be a late entry for Fight of the Year.

Broner had his moments in the fight, but Maidana won the day by throwing from tricky angles and consistently landing a punishing left hook.

“Maidana’s awkward ways are working in his favor,” said ringside analyst, and world-class welterweight, Paul Malignaggi during the bout. “Broner is getting hit with shots from different angles. Shots that he would not normally get hit with.”

In a thrilling eighth, Maidana landed a series of lethal blows including a final left hook that sent Broner wobbling to the canvas for a second time. In the next exchange, Broner tied up Maidana for a few moments before Maidana uncorked a head butt into the chin of the champion.”

Referee Lawrence Cole deducted a point for the foul negating Maidana’s knockdown adding an additional layer of drama to the close fight. But in the end, Maidana had distanced himself on all three scorecards to win a unanimous decision and wrest the crown from Broner.

After the bout, ringside reporter Barry Tompkins asked Maidana about comments earlier in the week, that Broner had never faced anyone like him. “The truth is, I’ve never fought someone like [Broner],” said the new two-division champion via SHOWTIME Sports translator Felix De Jesus. “And the truth is it was a great fight.”

Regarding the game plan coming in, Maidana said, “The plan was to fight any which way we can do it and we won.”

Regarding the rematch: “Yes. No problem.”

Maidana improved his record to 35-3 (31 KOs) and is now 2-2 in world championship fights and can now lay claim as the world’s best welterweight not named Floyd Mayweather.

Soto Karass opened the scoring in the first seconds of the bout when he stunned Thurman with a big right hand. But Thurman kept his feet, barely, and nearly floored Soto Karass to end the first round.

A furious pace was set. Thurman gradually stole the momentum and broke seemed ultimately to break the will of the Mexican challenger. Thurman showed impressive lateral movement and superb timing as he landed precise and powerful combinations in retreat.

Thurman sent Soto Karass down in the fifth and finished him in the ninth. The final blows were a lethal combination left hook and perfect left uppercut that landed flush to end the contest at 2:21 of round 9.

With the explosive technical knockout, the 25-year-old Thurman of Clearwater, Fla., is sure to climb the ranks of the deep welterweight division, arguably the most talented division in boxing the world over.

“Thurman can transition from a defensive position to explode with powerful shots,” said Malignaggi. “That’s not an easy thing to do.”

Hall of Fame analyst Al Bernstein added this of Thurman, “Showing lateral movement while landing combinations and power punches. That’s a tremendous set of skills to have. He has every offensive weapon you could want.”

A jubilant Thurman: “San Antonio, baby. Thank you. There’s a lot of tough guys out there but One Time represents the KO every time. They can take it for a few rounds, but they can’t take it for 12 rounds.

“I saw I had him hurt. He was buzzed, standing up and I finished the show. I saw that he was open,” Thurman said of the final uppercut. “I sat down on that left hook and I exploded.

“Everyone’s dangerous with an 8oz. glove. Luckily, God willing, I was able to stand with him, go toe-to-toe and get him out of there.”

When asked who he’d like to fight next, Thurman said, “I’d like whatever the fans like. I am here to entertain. I am here to give the best fights in the welterweight division.

Working behind a piston-like jab and a multitude of power punches, Santa Cruz won the bout on the strength of his trademark volume punching. He sent Seda down in the fifth round, a flash knockdown, but nonetheless it was only the second time Seda had been down in his career.

Seda kept the bout close, fighting well while backing up from the perpetual charge of Santa Cruz. At times, Seda got good work done on the ropes. But in the end, as has been the case with all of Santa Cruz’s prior challengers, his work-rate proved to be too much. SHOStats recorded Santa Cruz landing 297 total punches of 829 thrown; 197 of 454 power punches; and 100 of 375 jabs.

“He was a tough guy,” said Santa Cruz, a Mexican now living and fighting out of Los Angeles. “I am sorry to San Antonio that I couldn’t do what I wanted to do. I wanted to give a better fight. Next time I’ll try to do better.”

[Regarding when he might return to the ring] Santa Cruz said, “I feel good. The sooner, the better for me. I want to stay at 122. Maybe spend next year at 122 and we’ll see after that. I thank San Antonio for their support. This is a lovely city. I have wanted to come to fight here for a long time and I am glad we did.”

Of Seda, Hall of Fame analyst Al Bernstein said near the end of the bout, “Seda may be better off in the 118-pound division because he has shown some tremendous talent in this fight. He’s just in there against a bigger and stronger man in Santa Cruz.”

WBA Light Heavyweight Super Champion Beibut Shumenov defended his title with a three-round route of Tomas Kovacs in the opening bout on SHOWTIME. Shumenov imposed his will, using his jab to set up a strong right hand and an impressive check-left-hook. He knocked down Kovacs in rounds one and two before finishing him with a combination at 2:55 of the third.

Hailing from Kazakhstan and fighting out of Las Vegas, Shumenov (14-1, 9 KO’s) looked to Bernard Hopkins, who was in the ring after the bout, for a chance to face the future Hall of Famer.

“My main goal is to unify the titles,” said Shumenov after the fight. “I know Bernard (Hopkins) wants to fight me. I’d be honored. He’s a truly legendary champion. I would be honored…. I am ready.”

Hopkins joined the SHOWTIME interview and added, “I hope he doesn’t fight that well when we fight. That right hand was coming straight down the pike. He warmed up a bit and executed very well. It will be an honor, for me, to take his belt.”

“I clearly out boxed him,” Salka said. “I’m not making an excuse. I landed shots when I wanted to land them. I was making him miss. What else am I supposed to do? If you’re being real generous you give him three rounds. He was swinging wild and missing shots while I was landing clean punches. It’s bullshit.”

Undefeated lightweight prospect Robert Easter, Jr. (8-0, 8 KO’s), kicked off the SHOWTIME EXTREME® telecast with a bang, registering his eighth KO in as many fights when he knocked out Hardy M. Paredes (16-13, 10 KO’s) in the first round. Easter landed two text-book hooks to finish Easter; one to the head followed immediately by one to the body. Paredes took a knee. Then two and the referee counted him out at 2:30 of the round.

“I knew it was coming,” said Easter [of the finishing body shot]. “It is just one of those shots that I always land. I’ve been working on it since I was a little kid. I can do it all. I can box and I have heavy hands.”