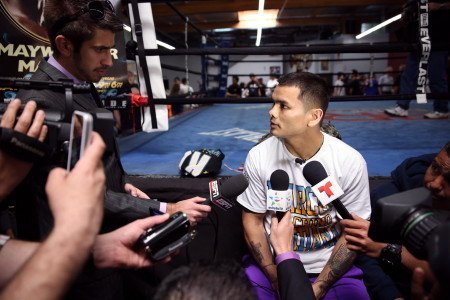 (Photo credit: Stephanie Trapp/Showtime) Marcos “El Chino” Maidana has a eighty two knockout percentage going into his May 3rd bout with Floyd “Money” Mayweather. Maidana is a pucher with power in both hands and is very confident that he will be able to not only hurt Mayweather but finish him. If you ask most people they will say that the only chance Maidana has of winning will be to catch Floyd with a big punch.

Maidana is focused on delivering his knockout blow, but doesn’t seem to think that maybe Mayweather might be the one catching him with a big punch. When Maidana was asked if he had to be cautious of Mayweather’s punching power as well, he replied “I’m not worried, I’ve been hit by big punchers it doesn’t matter.”

Marcos plans to swarm Floyd with activity which fighters have a hard time doing because Floyds ring movement and angles makes it difficult for a boxer to come forward. The last time I can recall Floyd being swarmed with activity and pushed to fight was his bout with undefeated (at the time) Ricky Hatton.

Ricky jumped on Floyd from the opening bell and tried to bully him. As the fight played out Mayweather began placing his shots and using Hatton’s aggressiveness against him. The last round ended with Floyd delivering a check left hook that sent Hatton flying into the ring post.

Hatton got back up only to be put down again with the referee calling an end to the contest. I believe Maidana will come to fight and mirror what Hatton did against Mayweather. Their styles are different, I think Maidana has more power and is trickier than Hatton. Hatton had more of a uncontrolled mauling attack, while Maidana does work off of his jab. Maidana believes he doesn’t need a knockout to win because in his mind he plans to outwork Mayweather much like he did Adrien Broner. He hopes that his high punch output will put him past Floyd on the scorecards. The problem with this is once Floyd feels slightly threatened he turns into a different fighter. Floyd is good at adapting and taking away whatever his opponent does well.

When Floyd was hit with a big shot from Shane Mosley in the second round he had regained his composure by the end of that round and went on to dominate the fight. Floyd is capable of hurting fighters but his style is safety first and he knows he can simply outpoint you rather than risk a big punch landing on him.

Most of the time when a fighter is hurt they tend to go backwards and Floyd will not chase them down to finish them off. If Floyd is able to hurt Maidana trust that Maidana will continue to come forward leaving himself open to Floyds attack, which just might cause Maidana to suffer the same fate as Hatton. I think Maidana will bring out the best in Floyd. He will make it a very exciting night for fans come May 3rd. Fans should definitely tune in because this one will be a treat that many won’t expect.