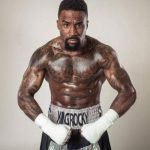 Baltimore, MD U.S.A. – Undefeated welterweight prospect, Malik “Iceman” Hawkins (4-0-4kos) will be returning to his hometown of Baltimore, MD looking to extend his record again as a professional fighter. Hawkins had a much decorated amateur career where he won multiple national championships along with a pair of golden gloves championships. In the professional ranks he remains undefeated; he has yet to enter the second round of his fights due to scoring all first round knockouts in his contests so far. Malik continues to show a great power and excitement every time he steps through the ropes.

Undefeated featherweight Gervonta “Tank” Davis(8-0 8KOs) returns to the ring tonight on ESPN2, making this his first televised bout. Hailing from Baltimore, MD “Tank” has long awaited this moment. He said, “I’ve always dreamed about making my television debut, and now it will happen on October 8th. Thank you Al Haymon, Team Davis, and ESPN2, for helping make my dream come true. I’ve been putting in solid work in the gym and I will be ready for my fight. This will be my first time fighting in Mississippi, so I’m looking forward to putting on a show for the crowd. I can’t wait to represent for my city of Baltimore. Thank you to my fans that keep supporting me. I’ll keep fighting for you.”

Its not easy growing up in the city of Baltimore. Baltimore city has long been crime ridden and drug infested. When Gervonta Davis got into an altercation at the early age of 5 years old his uncle decided he didn’t want Davis to take the wrong path that would be sure to leave him dead or locked up. He took Davis to Upton Boxing Center where he met coach Calvin Ford who was the inspiration for the character Dennis “Cutty” Wise on the hit HBO show The Wire. Coach Calvin as he is known in the gym saw great potential in Davis at a very young age and together they embarked on a amateur career that spawned many belts and national championships. Gervonta finished his amateur career with an outstanding record of 206-15. 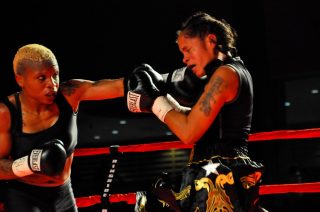 Tyrieshia “Lady Tiga” Douglas 4-0(1KO) returns to the ring on June 28th at DuBurns Arena in Baltimore, MD. She will face Christina Fuentes in a six round bout. In her last bout she had a rematch against Marisol Miranda in which she completely dominated once again and also forced Miranda into retirement. Douglas is campaigning from 108lbs to 115lbs challenging anyone who will face her. Her goal is to be a world champion before the 2014 year is up.

She recently made a few changes in her camp and now trains with promoter and trainer James Hogan. Douglas and Hogan share the same goal of gaining recognition for women’s boxing. The card she is fighting on will also be host to the main event between Tori Nelson vs Nicole Woods. 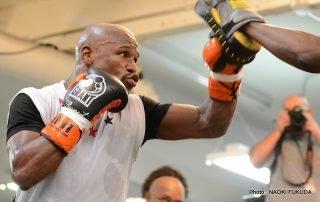 Floyd Mayweather Jr. has been in the sport of boxing going on 18 years now but has been boxing all his life. He has fought in multiple weight classes against many fighters who will one day be inducted into the hall of fame. He is widely considered to be the pound for pound king of boxing. Floyd was asked about what he thought about Bernard Hopkins calling him out to face off in the ring, and he believes that everyone is trying to hit the jackpot and fight him. He is highest paid athlete in the sport and make no mistake everyone in the sport wants the opportunity to dethrone the king.

Mayweather is very conscious of this which is why he trains the way he does. He makes it known that he never overlooks an opponent. Every person he faces in that squared circle has the potential to destroy his plans of becoming the best to ever lace up the gloves. People who have seen Mayweather train say that he trains like a man who hasn’t made a dime yet, even though his career has earned him hundreds of millions. He acknowledges that all the young stars want to be in his current position so they are coming full force to knock his head off. 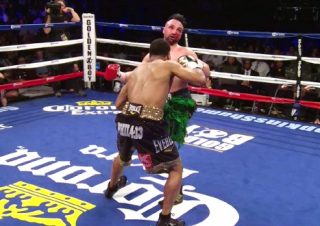 The DC Armory hosted the Bernard Hopkins vs. Beibut Shumenov card where Bernard “The alien” Hopkins made history once again by unifying titles at the the age of 49 years old. He won a split decision over Beibut Shumenov unifying the WBA and IBF titles. Hopkins was the main event but it was Shawn “Showtime” Porter 24-0-1 (14KOs) who won over the crowd.

Porter made his first title defense against the king of Brooklyn Paulie “Magic Man” Malignaggi 33-6 (7KOs). This fight woke the crowd from the previous fight where middleweight champion Peter Quillin defeated Lukas Konecny, which failed to please fans at the armory. 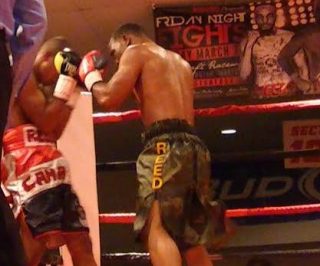 Mike Reed (photo by Justin Jones / ESB) improved his undefeated record to 9-0 (6 KOs) when he took on game opponent Regino Canales in the main event at Rosecroft Raceway Friday Night Fights. The contest was halted by the referee at the end of the fourth when ringside physicians decided it was unsafe for Canales to answer the bell for the fifth round. Shortly after the bout was stopped Regino collapsed in the ring and seemed to have seizure like symptoms. He was taken out the ring on a stretcher and evaluated at Prince Georges County Hospital. I am glad to report that he was treated and released this morning.

Mike stayed behind his high guard and worked his way in with the jab. He was throwing bombs from both hands that connected to the head and body of Canales. Mike dropped Canales in the third round from a combination of punches ending with a right hook. Mike’s defense was on display as well as he made Canales fall to the canvas from missing a wild right hand. 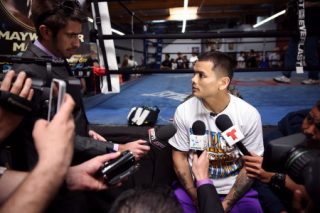 (Photo credit: Stephanie Trapp/Showtime) Marcos “El Chino” Maidana has a eighty two knockout percentage going into his May 3rd bout with Floyd “Money” Mayweather. Maidana is a pucher with power in both hands and is very confident that he will be able to not only hurt Mayweather but finish him. If you ask most people they will say that the only chance Maidana has of winning will be to catch Floyd with a big punch.

Maidana is focused on delivering his knockout blow, but doesn’t seem to think that maybe Mayweather might be the one catching him with a big punch. When Maidana was asked if he had to be cautious of Mayweather’s punching power as well, he replied “I’m not worried, I’ve been hit by big punchers it doesn’t matter.”