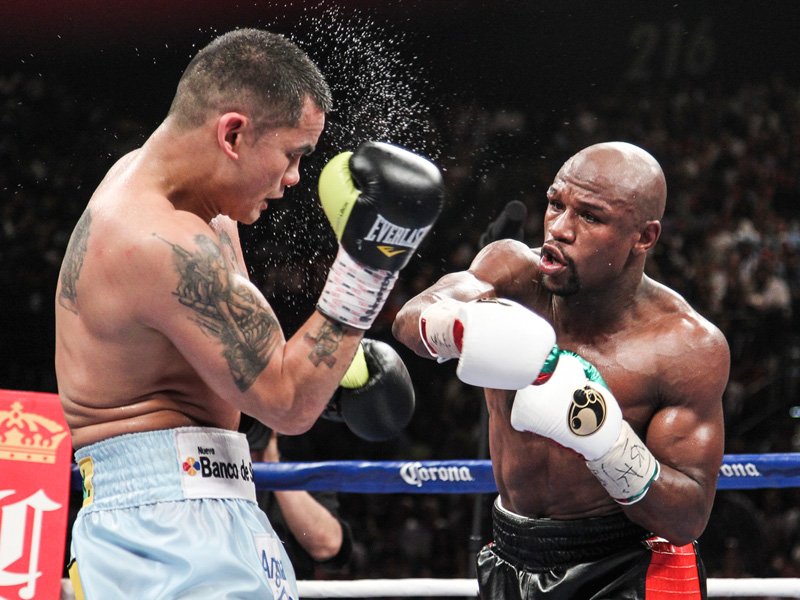 When boxing fans start wondering, how is it that Floyd Mayweather Jr., far from being the most exciting fighter in boxing, is the highest paid athlete in the world, a video like the above mentioned provides a solid hint: phenomenal ability to create hype and dictate the significance of his decisions. Basically he is capable of feeding the fans exactly what they need, which happens to be a mix of excitement and enthusiasm for what’s coming next.

In the video interview, not only does Mayweather Jr. grip the viewers by pledging to surprise us in May of 2015 (Pacquiao bout is the first thing that comes to mind), but he also announces a rematch against Marcos Maidana, which was unexpected by most. 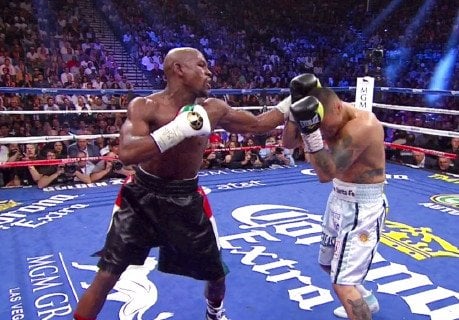 Floyd Mayweather Jr (46-0, 26 KO’s) ended speculation about who he’ll be facing for his next fight by announcing on Monday that he will indeed be facing Marcos Maidana (35-4, 31 KO’s) in a rematch on September 13th at the MGM Grand in Las Vegas, Nevada, and that he also has plans for a huge fight next May on Cinco de Mayo.

Mayweather didn’t say who his opponent will be for next May, but it’s got to be a big, big name in order to persuade Bob Arum of Top Rank in trying to compete with Mayweather by putting on Saul “Canelo” Alvarez vs. Miguel Cotto on the same night on HBO pay-per-view.

by Robert Uzzell and Chip Mitchell: Floyd Mayweather, Jr is in the final three fights of his career. Many names have been thrown out there: Manny Pacquiao, Miguel Cotto, Saul “Canelo” Alvarez, Keith Thurman, Danny Garcia, Shawn Porter, and of course Marcos Maidana.

In Floyd’s last fight, he faced his stiffest challenge in a while in defeating Maidana by majority decision. The victory by Floyd came at the cost of a few shots to the family jewels and a nice shiner above his right eye.

Before we get to the predictions, let’s look at the odds of each fighter facing Floyd in September.

Manny Pacquiao – 0%. The politics or politricks involved continue and even if both guys were ready to play, there is not enough time to build up this super-fight.

LAS VEGAS– The battalion chief for the Clark County Fire Department, Erik Poleski, said 24 people were taken to Las Vegas area hospitals after a panicked crowd stormed out the doors of the MGM’s Grand Garden arena.

This was just after the WBC/WBA welterweight (147 pounds) unification title fight between Floyd Mayweather Jr. and Marcos Maidana had just finished at the venue. It was reported that over 60 people were injured after a rush to leave the arena. Some exits were found to be closed and leaving spectators were funneled to certain directions of egress.

The Las Vegas police confirmed reports of a loud bang in the area that probably led to spectators stampeding out. The bang was caused by a temporary wall that fell down near the adjacent food court, Poleski added. The bulk of the medical transports were for minor injuries like cuts, and sprains, as well as leg and back injuries. “Most of the injured seemed to be from traumas associated with being stepped on,” said Clark County spokesman Erik Pappa. 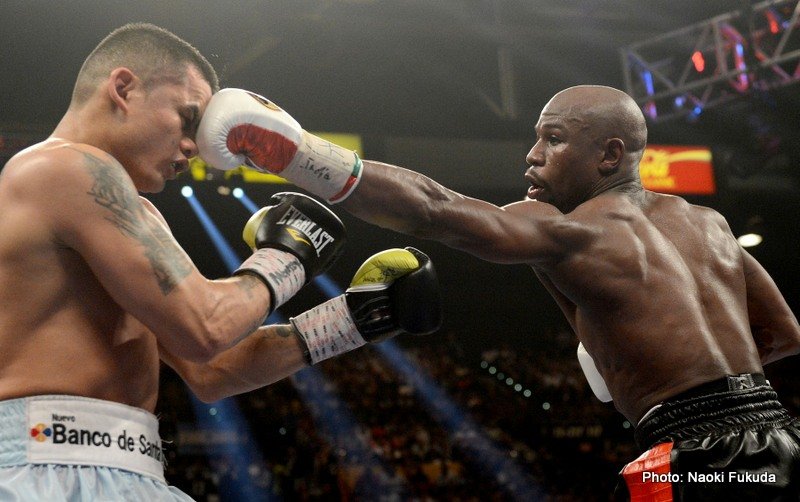 Greg H. (Bronx, NYC): Going into the Maidana fight I thought Floyd Mayweather was in for an easy night, but I know you felt it would be tough from the beginning. What were your thoughts about both of their performance? And do you think a rematch is warranted?

Vivek W. (ESB): From the moment this fight was signed, I felt we would get precisely the fight we saw at the end of the night. I was shocked at the odds when they were initially announced, and I was even more shocked to see that they ballooned to the point in which they did by fight night (12:1). I don’t claim to know boxing any better than the next man, but what I learned once again is that the countless hours of film study in the still of the night does make a difference when giving educated feedback. Mayweather has always performed with a certain level of genius; but my logic from day one was that there was no way a precision based puncher who throws one shot at a time could get a decisive victory over a fighter who throws 70 punches per round with power at the end of each one. 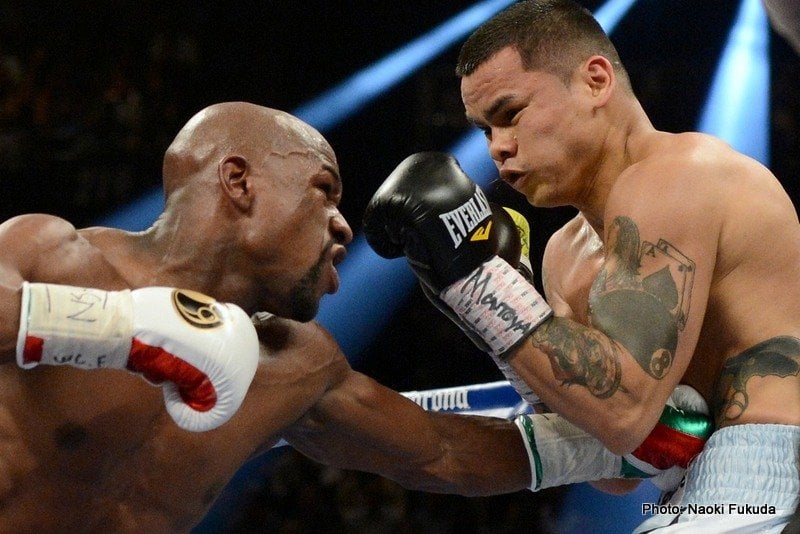 Marcos Rene “El Chino” Maidana might not have been the best opponent Floyd “Money” Mayweather, Jr. has ever faced, but he certainly proved to be his toughest. Often times that is said about Maidana. His awkward style turns fights into armed conflicts. He throws buzz bombs, rockets, and mortar shots. His overhand right is the most fun to watch. It should be called an overhead right, because It resembles a mortar round. It travels high up and over, and then bombs away as it decends. If Money or TBE, as he now prefers, would have pulled back from that punch saturday night at the MGM Grand, there would have been an explosion, and his first defeat might have resulted. Instead, TBE intelligently stayed inside the punch, so at worst it would carom off the back of his dome or just whiz by. 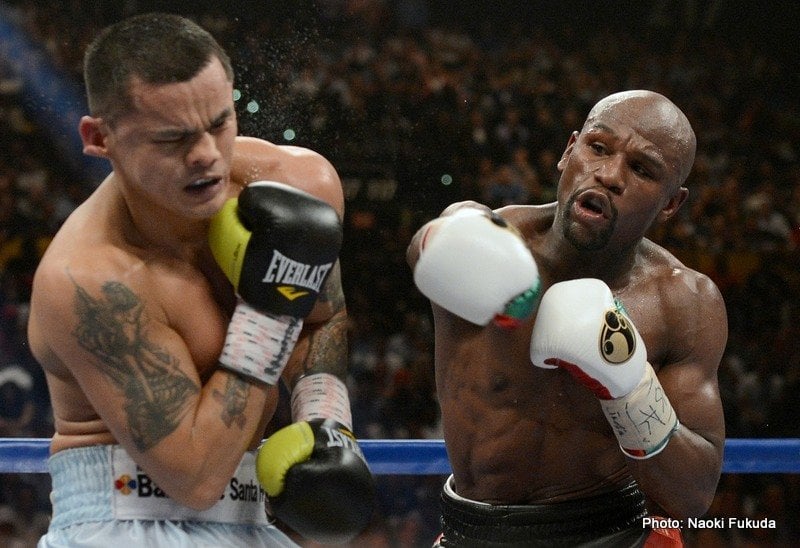 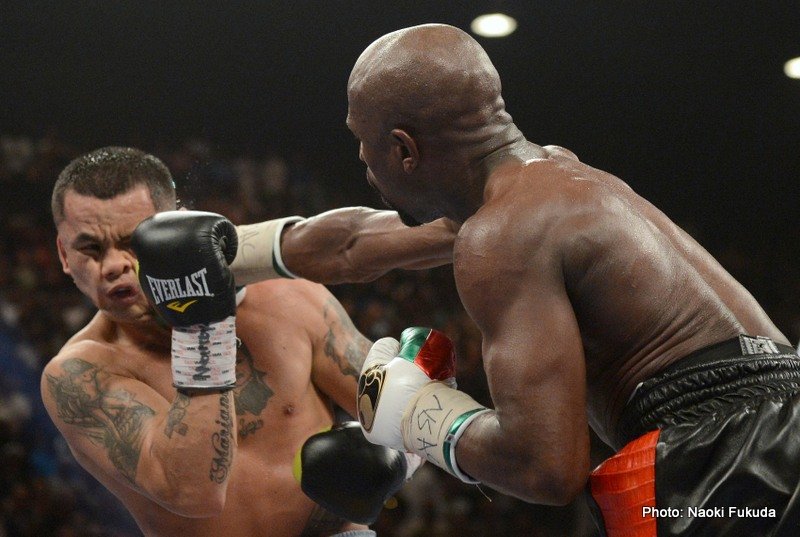 It’s no secret that Floyd Mayweather Jr. is a virtuoso when it comes to moving, defending, and making his opponent look inadequate. Sure he fights word class champions, and many of them are truly deserving of that opportunity, but aside from Castillo way back in the day, there has not been a challenger that made Floyd work harder than a routine sparring session.

Yesterday, Marcos Maidana did just that. Forget the fact that he came out swinging and did not run of ouf gas until the last second of the last round, and forget his stunning ability to walk through and keep pressing no matter what he himself gets hit with, in his fight against Mayweather Jr. what surprised me, was just how indifferent he looked and performed when facing someone as elusive as Mayweather Jr.

Talking before the fight is one thing, and even trying to persuade the people watching the fight by showing off, sticking out one’s tongue, or even in some cases humping their opponent in the ring, but when it comes to making Mayweather look vulnerable, everyone failed without any glimpse of hope.