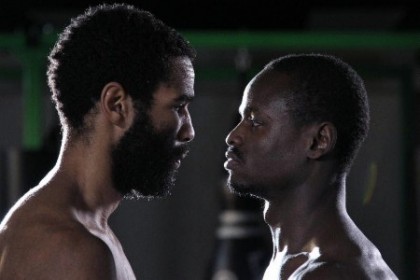 (Photo credit: Esther Lin/Showtime) WASHINGTON, D.C. (Jan. 22, 2014) – It may freezing in our Nation’s Capitol, but the four fighters competing in this Saturday night’s SHOWTIME CHAMPIONSHIP BOXING doubleheader (9 p.m. ET/PT, delayed on the West Coast) braved the cold to sit down with SHOWTIME® cameras at the DCB Fit Boxing Gym to discuss their upcoming bouts.

Below please find what the boxers said Wednesday:

“I feel great. I feel like I had a good training camp and I am just ready to go Saturday night.

“It was pretty cool to meet Dierry Jean for the first time today at the SHOWTIME shoot. We didn’t say anything to each other. No words. We did a face-off, but that was it. I came in when he was here [at the boxing gym], we did our faceoff and then he left. I wasn’t expecting to say anything to him and it’s going to be that way. He is small, but kind of the size I thought he would be. Size doesn’t mean anything.

“This was a better camp overall for me. My body is in better condition.”

“We have over 100 people that have bought ringside tickets. We have made sure that all arrangements have been made for everyone.

“We are doing everything the way we should be as if we are home. We are not here as tourists. We are here to get the job done, to take that belt and go back home with it. But we love Washington, D.C. It is a nice city. People here are very hospitable.

READ:
Josh Taylor defends against Apinun Khongsong on May 2

“Look, I am here on a mission to bring that belt back. And having met Lamont, nothing changes.

“I am honored to fight the main event on SHOWTIME. When I started boxing, I was dreaming of this day. I have done all my work to come out victorious and in a very impressive fashion.”

“Fighting in D.C. is an awesome feeling because I feel like I am fighting in front of President Obama in our Nation’s Capitol. It’s a great experience and I am enjoying every little bit so far. I am happy to be welcomed to this city and the weather is not affecting me. I am here to put on a show and be victorious on Saturday.

“I know Gabriel Rosado is a tough fighter. I just need to be ready to fight. Training camp was excellent. I am just ready for Saturday to get this over with and move on with the rest of my career.

“Doing these shoots, is part of making boxing a career. I’ve been here before.. At the end of the day we might be able to make even more of a professional career of being in front of the lights and on TV.”

“It was 90 degrees in Puerto Rico, but I am used to this weather. I left Philly a few weeks ago during a blizzard because it was interfering with my training. I couldn’t put my roadwork in so I went to Puerto Rico for the last couple weeks of camp.

“I think DC is a great town for boxing. A couple legendary fighters are from here. It’s not too far from Philly so I know I have a crowd coming to see me on Saturday night.

“It is great to be back on television. It is rejuvenating. This is a fresh start for the New Year and it is the first big fight on SHOWTIME. I’m excited to go back to super welterweight. I just think it’s going to be a great night for me.

“We were training in Puerto Rico and my trainer kept saying ‘Its Operation Chop down Charlo.’ Now everyone is tweeting that. We even made shirts and we’re running with it.

“I didn’t get a win technically in 2013, but I think I won fans. I think it is because they like that I come to fight. The fight against J’Leon Love was controversial and during the Peter Quillin fight I had great momentum. Unfortunately it got stopped prematurely. I think the fans are behind me and they’re rooting for me. I’m really eager to get into the ring on Saturday night.”

Read: Arum wants Mikey Garcia in position to fight Pacquiao by end of 2014
Read: Canelo: I’ll still be the future of boxing despite loss
Follow @boxingnews24