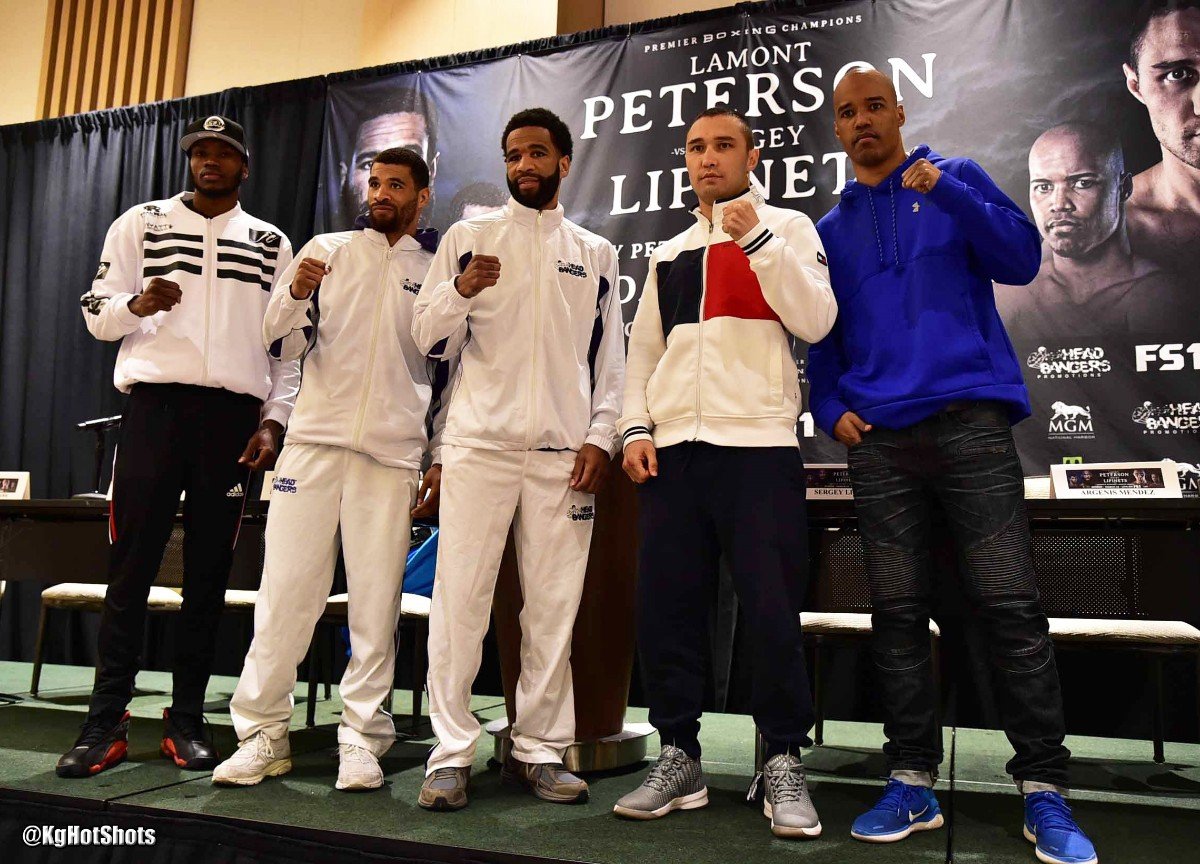 Once-beaten contender Anthony Peterson also faced off against his opponent, former world champion Argenis Mendez, as the Peterson brothers prepare to fight in front of their hometown fans as the main and co-main event in a nationally televised event for the first time since 2006.

Tickets for the event, which is promoted by TGB Promotions and HeadBangers Promotions, are on sale now and can be purchased by visiting www.mgmnationalharbor.com/.

Here is what the press conference participants had to say Friday from MGM National Harbor:

“I know how to keep the pressure off of myself before a fight. I know we’re at the top level and I’m facing a top guy. I’m looking to capitalize on the opportunity and move forward.

“Lipinets is a tough guy. He only has about 15 pro fights, but he was able to move through the ranks pretty fast. That got my attention and lets you know that he’s definitely coming to win.

“Anthony and I have fought on cards together but not on this stage for a while. I used to be nervous for him, but at this point we’re veterans and we’re just going to enjoy it.

“From day one we’ve treated every opponent like a champion. We always had that mindset that we had to go out there and take care of business, and that’s not going to change on Sunday night.

“Any time I fight at home, there’s a little bit more on it. It makes things easier when I’m getting through the whole progress of training camp. There’s a type of home court advantage. I knew when they opened this venue, that eventually I’d fight here. I’m going to enjoy it.

“I never felt like I was done fighting after my last fight, but you have to be smart. After each fight I assess the whole situation before I move on. That’s what I did before this one and I’m happy to be in this position.”

“I’m very excited to be in this position and in this fight. I appreciate that Lamont took on this fight. He’s a great fighter who I respect and I’m sure he’s ready. I’m ready to make this fight goes down in history.

“I know that a win over Lamont will get me the big fights that I’m looking for. I want to be a champion at welterweight and that starts with making a statement on Sunday.

“I have a very tough opponent in front of me and I’m motivated by the challenge. I’m in this sport to be in the biggest and best fights. People say this is 50-50, so I’m excited to show why I’m better.

“This is a big fight. I have to get through Lamont to get to where I want to go. We’ll find out Sunday if he can stop me. I know that if I do what I have to with Lamont, that will set me up.”

“My brother and I are at a point in our career where we’re having fun. It’s like a family event. We’re going to have fun and take care of business. I’m ready to put on a big performance. Don’t blink.

“I love the rush of getting into the ring in front of my hometown, that’s why I do it. The other stuff is cool, but I just love to see people excited and telling me I put on a great performance. It’s an amazing thing.

“It’s been a minute since I’ve been in the ring, but I’ve been fighting and working with guys like Shawn Porter, Jarrett Hurd, Robert Easter, Adrien Broner, Gervonta Davis and my brother. I’ve been in there with all the top fighters.

“My fire is still burning. I study boxing history and I look at guys who have gotten their breaks late in their careers, and I know I’m one of those guys.”

“I’m very happy to be here and to have this opportunity. Anthony Peterson is a very good fighter, so I’m ready to be at my best on fight night. I’m here to continue winning and leave the fans with a great show.

“I’m happy to fight Anthony in his hometown. I’ve always been willing to travel anywhere around the world for fights. It’s normal to me and I’m ready for everything that comes with being the road warrior.

“I definitely plan on taking this out of the hands of the judges. I know that I have to do a little bit more to make sure I get the win. Anthony is a good fighter, but I’ve trained hard and this is my moment. I want to show the world how great I am.”

“I’m in great shape and I’m war-ready. His 0 has to go. I’m ready for anything he’s going to bring and I’m going to put on a great performance for everyone watching.

“I don’t think he’s faced anyone on my level and I’m ready to show it. I’m going to do my talking in the ring and put on a clinic from start to finish.”

“I want to see the dog in Lamont in this fight. I want to see the smart fighter that he’s always been. I think the rest has done him a lot of good. He’s got his mind and his body right. He looked at me on day one and I could tell he was ready to roll.

“In the amateurs Lamont and Anthony used to share cards all the time. When they first started, we also did it frequently. It’s not unusual for us. It’s been a while, but it’s not a situation we haven’t been in.”

ABOUT PETERSON VS. LIPINETS
Peterson vs. Lipinets is a Premier Boxing Champions on FS1 and FOX Deportes event that is headlined by former two-division world champion Lamont Peterson taking on former 140-pound champion Sergey Lipinets in the main event.