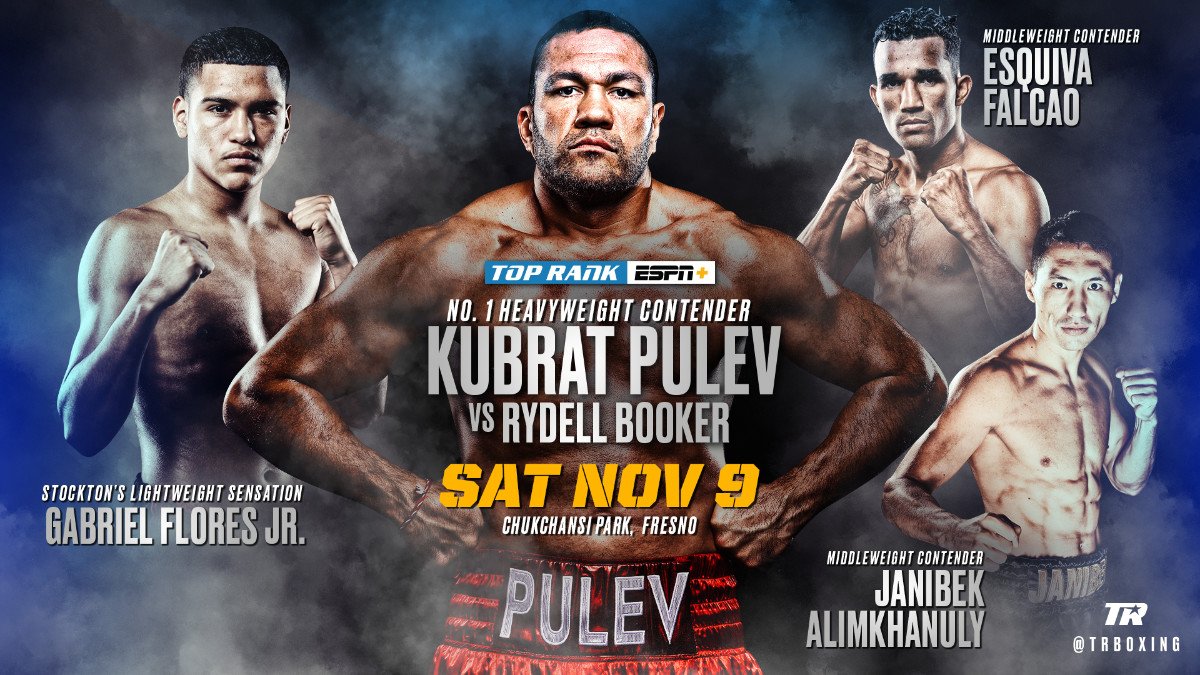 IBF No. 1 heavyweight contender Kubrat Pulev returns to the ring to face Rydell Booker in a 10-round clash Saturday, November 9 at Chukchansi Park in downtown Fresno, California.

Pulev-Booker will serve as the co-feature to the Jamel Herring vs. Lamont Roach Jr. WBO junior lightweight world title bout and both fights will live stream on ESPN+, the leading multi-sport streaming service, starting at 10 p.m. ET/7 p.m. PT.

Arum says Pulev is ready to fight for title

“Kubrat Pulev is ready to fight for a heavyweight title today, but he has one final test before that can become a reality,” said Top Rank chairman Bob Arum. “He is motivated to knock out Booker and get ready for his title shot in early 2020.”

“This fight with Rydell Booker is very important because of what’s at stake,” Pulev said. “Everything is on the line. I am the top contender in the heavyweight division, and I am the mandatory challenger for the winner of the Andy Ruiz Jr.-Anthony Joshua rematch. I want the winner. It doesn’t matter who it is.”

“It’s a big deal for me. This is a chance for me to show everyone that I still have it,” Booker said. “I haven’t missed a beat. This opportunity couldn’t have come at a better time. I was in camp with Oleksandr Usyk for six weeks before I got the fight. The numbers made sense, so I jumped at the opportunity.”

Pulev (27-1, 14 KOs), one of Bulgaria’s most prominent sporting figures, has won seven fights in a row since challenging Wladimir Klitschko in a failed bid for the unified heavyweight title in November 2014. He earned the IBF No. 1 ranking last October with a unanimous decision over Hughie Fury in his hometown of Sofia, Bulgaria.

Pulev maintained his ranking with a seventh-round knockout over Bogdan Dinu in the main event of a Top Rank on ESPN telecast March 23 in Costa Mesa, California. He faces Booker (26-2, 13 KOs), a 38-year-old Detroit native who is 4-1 since returning in February 2018 from serving a 12-year prison term for a drug conviction. A cruiserweight contender in the early 2000s, Booker now hopes a return to boxing can help him outside of the ring as well.

Promoted by Top Rank, in association with Golden Boy, tickets are priced at $200, $96, $46 and $29 (not including applicable fees). Tickets can be purchased by visiting mpv.tickets.com, charge by phone at 559.320.TIXS (8497) or at the Chukchansi Park box office (open Monday-Friday from 9 a.m. PT to 5 p.m. PT). In honor of Veterans Day and the Marine Corps Birthday, any active or retired service members will receive up to four free tickets to the event by presenting their military ID at the Chukchansi Park box office (while supplies last).