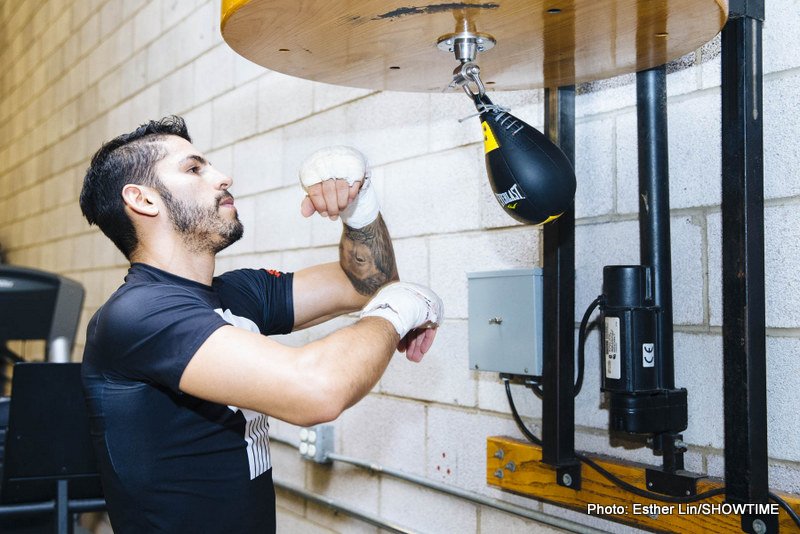 For many, Dagenham lightweight Kevin Mitchell is one of the most likable characters in British boxing – and at times has been one of the most frustrating to follow the career of – notably in his two crushing defeats to Michael Katsidis at Frank Warren’s massive Upton Park show in 2010 and then again in his second heavy loss to Scotland’s Ricky Burns in 2012 which was ostensibly the end of him at the time.

It’s been well documented that a party lifestyle and the distractions of both fame and money were responsible for the past hiccups in a stop-start career – that has enjoyed a resurgence under promoter Eddie Hearn and trainer Tony Sims – and it culminates Saturday in his challenge to dangerous Venezuelan WBC champion, Jorge Linares.

Mitchell has spoken to the BBC ahead of the fight to promise that he is a different, more mature fighter to the one of old – who plunged into despair following his first defeat to Katsidis.

Troy Williamson : "I Would Have The Egg(ington) For Breakfast And The Cheese(man) For Lunch!"

It wasn’t until after the second loss to Burns that Eddie Hearn stepped in and took over the reins of Mitchell’s career – something Kevin gives Matchroom Sport great credit for.

“Now I’m with the best team in the world. Eddie is passionate about his fighters, is up and down the country making sure they’re OK and he loves the sport.”

“(Eddie’s father) Barry is from my area, Dagenham – and is a proper person, a good person. They know what’s going on and know me inside out.”

It would seem since leaving Jimmy Tibbs and hooking up with old amateur trainer Tony Sims, Mitchell has found himself in the best place of his career.

“Tony is a great trainer and also a tremendous mentor. He keeps me in line, just like he did when I was a kid. He rings me up all the time, asks me what I’m up to – how the kids are. I couldn’t have come back without him.”

And Mitchell has promised that he is fully fit and focused ahead of challenging Golden Boy Promoted Linares – a fight Oscar De La Hoya is confident his man wins.

“I’ve had some mental, mad parties – the craziest you could think of. But I don’t miss it. I’m done with all that messing about.”

After promising a show against Linares at the media workout earlier this week, in which he said he will “rock the gaff” – the London man made his career ambitions clear should he come out of the fight the new champion on Saturday night.

“My ambition is to win a unification fight and get out with my finances straight and my faculties intact. That sounds good to me.”