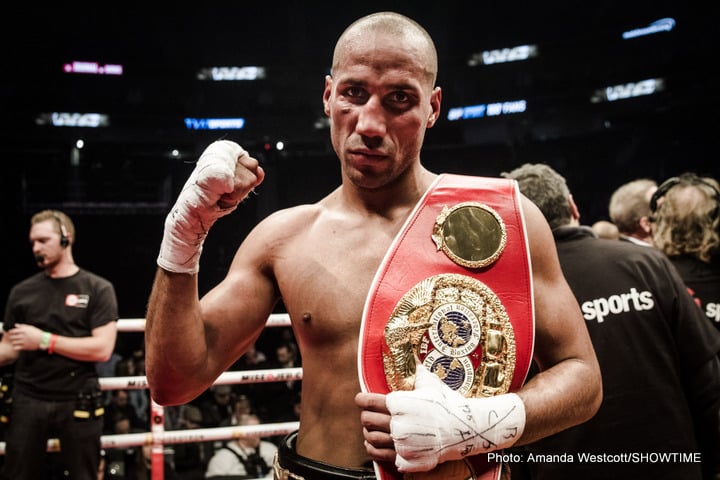 Britain’s James DeGale will make the second defence of his IBF super-middleweight title against Mexico’s Rogelio Medina in either April or May in the UK, in what will be the Olympic gold medal winner’s first fight in his own country for 18-months – so reports Mail OnLine.

The southpaw who was last seen out-pointing former champ Lucian Bute in a great action fight in Canada, might face Medina on the April 9th Anthony Joshua-Charles Martin card at The O2 in London, or he may headline a card by himself at a venue to be decided on May 14th, so says promoter Eddie Hearn.

DeGale, 22-1(14) was to have fought his IBF mandatory, Jose Uzcategui, but he has pulled out of the fight due to illness, so in steps Medina, 36-6(30). Hearn says the Medina defence will still count as DeGale’s mandatory requirement.

“It will still count as a mandatory as the IBF have just gone down their list. It means he will have fulfilled that obligation so he is free to look at whatever fight he wants after that,” Hearn told Mail OnLine.

DeGale craves the big fights, especially a unification match with reigning WBC champ Badou Jack. Hopefully the big fights will come in the near future but of course, DeGale cannot afford any slip-ups against Medina. Going by the formbook and the records and pedigree of the two men this will not happen.

Medina is young at age 27 (he is three years younger than DeGale) and his 30 stoppage wins show he can punch – at least at a certain level. The six losses Medina has suffered, three of them stoppage defeats, are the problem. Being halted by Gilberto Ramirez back in 2010 (soon to fight Arthur Abraham in a WBO super-middleweight title challenge) isn’t anything Medina should be ashamed of, but a well past his best Yori Boy Campas also stopped Medina, in 2011. Medina has won four in a row, all by stoppage, since his most recent loss, a split decision defeat to Jonathon Gonzalez in May of 2014, but just before that he was stopped by the aforementioned Jack.

Look for “Chunky” to win in style in his second title defence.