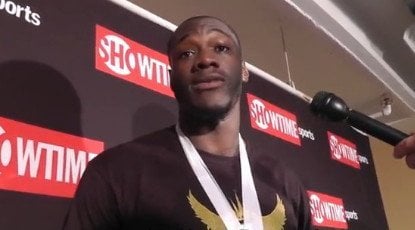 Unbeaten Deontay Wilder (32-0, 32 KOs) has little doubt that he’ll be victorious next month in his fight against WBC heavyweight champion Bermane Stiverne (24-1-1, 21 KOs) on January 17th at the MGM Grand in Las Vegas, Nevada. Wilder feels that he’ll get the win but he might not get the credit for the victory because he thinks that a lot of boxing fans will still doubt him.

Beating the 36-year-old Stiverne will go a long ways towards proving Deontay’s many detractors wrong, because Stiverne is considered to be a good fighter by a lot of fans. However, for the 6’7” Wilder to really prove himself, he’s going to need to beat other contenders like Bryant Jennings, Alexander Povetkin, Carlos Takam, Tyson Fury and Kubrat Pulev.

With the way that Wilder has been matched as a contender, it’s very likely that he won’t ever face any of those guys unless he beats Stiverne for the WBC title, and then holds onto the belt long enough for him to start facing some of them.

“I have heard nothing but excuses for my 32 wins by KO and when I get 33, I don’t want to hear anything about it,” Wilder said. “I can’t let my ultimate number one fan, my daughter, down on Jan17. I’m going to fulfill my promise to her to be world champ.”

Wilder has one of the best right hands in the heavyweight division. If he’s able to land that punch enough times in the first four rounds of the fight, Stiverne will have a tough time staying upright. Wilder’s left hand isn’t much of a weapon, but his right hand is lethal. It’ll do damage if he can find a home for it on January 17th.

Stiverne has a good chin, but even he has his limits. He was hurt in his last fight early on by Chris Arreola. Stiverne was able to stay on his feet and ride out a brief storm from Arreola in that fight before knocking him out in the 6th.

If Stiverne can get to Deontay with his own punches then there’s no doubt that he’ll score a knockout. The only problem is Deontay is bigger, faster, and stronger with the longer reach. The chances are high that Deontay will do most of the landing in the early rounds of the fight, and that means Stiverne is going to need to possess a good chin in order to survive.

“I can’t wait! I’m so passionate about this fight. I wish it were tomorrow,” Wilder said. “I have no doubt at the end of this fight my hand will be raised as the new heavyweight champion of the world.”