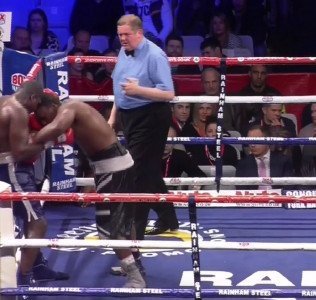 The heavyweight division was the particular focal point of the ‘Rock the Box III’ event staged last night, Feb’ 15th, at the Copper Box Arena, London.

The card was stacked with boxers from differing career levels, with some names only known by a handful of loyal fans and others who will be recognised by the global boxing community, but the two main events were heavyweight bouts that could ultimately make an impact on the division.

To write up the recent state of affairs of the heavyweight division would be merely an attempt to reword the many texts to have been already produced on the matter. The bottom line is: it can only get better.

Last night featured two of Britain’s leading heavyweight contenders, Tyson Fury and Derek Chisora, battling separate fights to lead to a summer showdown between the two, a fight that would be a rematch of their 2011 bout which saw Fury emerge victorious with a convincing unanimous decision.

The rematch with Chisora would be the culmination of a three-fight deal Fury’s promoter, Hennessey Sports, has with Boxnation, with the second fight set to take place, again at the Copper Box Arena, in April.

Last night’s bout was Tyson Fury’s pro-debut for Boxnation and his first professional fight since his knockout triumph over Steve Cunningham last April in New York. His opponent was American Joey Abell, a dangerous foe for any heavyweight coming off of a lengthy lay-off. Abell brought to London a record of 28 knock outs, 11 of which coming inside a single round, out of 29 victories with only 8 defeats. By nature Abell is a ‘hit or be hit’ kind of fighter, a style Fury typically prefers, and the fight was only ever going to be a shoot-out destined to finish well before the final bell.

Abell was down seven times altogether in the fight before the referee stopped it in the fourth. Big shots had been traded and landed by both boxers but the difference was that Tyson was able to take them. There was also controversy during the fight when Fury inflicted a low blow upon his opponent as the referee had called for a break. He was lucky not to have been duct a point for that and had claimed in a post-fight interview that the illegal shot was an intentional immediate response to a head-butt served by Abell upon Fury’s ear, adding also that it had nearly finished him off and had made him feel dizzy.

Fury came into the fight clearly too heavy with mid-section flab visible to all spectators. His uncle and trainer, Peter Fury, stated in a seperate post-fight interview that Tyson was 14Ibs over his desired weight and would be back to peak condition for his planned April bout. Peter also said that Tyson’s five week training camp in Cannes, France, leading up to the fight with Abell was fitness focused to lose weight from the twenty-two stone Tyson had bulked up to during a short retirement period after the David Haye fiasco.

By contrast to Fury’s short night of work his rival, Derek Chisora, had to go the full twelve rounds in defending his WBO and WBA international heavyweight titles against late-opponent and also former Fury victim Kevin ‘King Pin’ Johnson, in a fight openly labelled by Fury as ‘fight of the Tyson Fury losers’.

The fight was gruelling and for the most part frustrating to watch. Chisora was guilty of landing many punches to the back of his opponent’s head but in the fifth round had floored him with a right to the head. At times Johnson looked great behind the jab but this had often only been sustained through the first minute of a given round before relaxing and allowing Chisora to suffocate his work for the remainder. This has been the problem with much of Johnson’s career; he possesses the tools to be great but by nature he is a ‘lazy’ fighter.

By the end Chisora was announced as victor, retaining his two international titles, by a wide point decision but he certainly did not look in the same form as in recent fights. Leading into the Johnson bout Chisora had accumulated a run of four stoppages after turning his career around after three back-to-back defeats, all of which he had given a very good account of himself and arguably one was by way of a hometown decision (Helenius). Another of the trio of defeats came by way of a point’s loss against Vitali Klitschko but Chisora had given the heavyweight king the hardest fight since Lennox Lewis back in 2003; in fact, Chisora is one of only three boxers out of twelve that Vitali could not halt since that Lewis fight, and Kevin Johnson is another.

By the end of the night the path was indeed still clear for the summer showdown between Tyson Fury and Derek Chisora and hopefully in April fans will be given a proper excuse to get excited because much more than what was displayed last night needs to be produced in order to properly build-up the fight, plus is the fact that there are talks that the bout could potentially be an eliminator for the WBO heavyweight title and that would need to be further justified.

Further down the bill was featured another heavyweight; young prospect Hughie Fury, nineteen year old and near eighteen stone cousin of Tyson. Hughie looked sensational in stopping Matthew Greer in two rounds, taking it easy behind his jab in the first and then in the second dropping him with an overhand right and a further three times from body shots. The result saw Hughie’s record remain unblemished with 8 stoppages from 13 wins. Greer is a tough journeyman and Hughie’s stoppage of him in the second round equals that of Deontay Wilder and James Toney, not bad company to be mentioned with at all.

Of course it remains to be seen how far Hughie Fury can go but at the moment his path looks very promising, especially given that he has still not fully physically grown and is yet to find his man-strength, and a potential fight down the line against Anthony Joshua could be something very special for boxing fans.