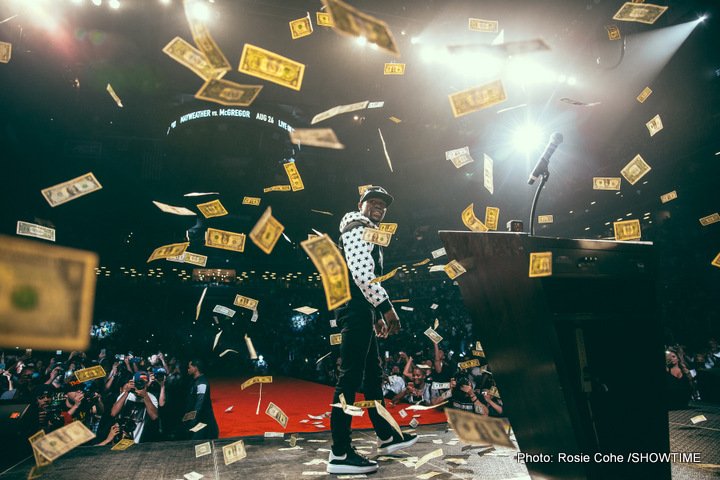 Why is Floyd “Money” Mayweather coming back – yet again – to fight once more; against Manny Pacquiao in a rematch this time? The answer is easy: just check out the 50-0 superstar’s nickname. Cash, dough, wonga, dosh, the Benjamins, dead presidents – whatever you want to call it – M-O-N-E-Y. It’s that simple. Floyd loves the stuff. He sleeps with it, he never leaves the house without a bundle of it, he named himself after it and he will never, ever run out of it. Or will he?

The richest sportsman on planet earth should be safe for life, his enormous fortune too vast to ever be spent. But, as fans know, Mayweather loves to gamble; he loves to feel the surge of electricity a big win can bring even him – a multi, multi millionaire many times over. But as with any gambler, Mayweather suffers a loss every now and then. In fact, “Money” might come away from his nights at the sports-book or at the tables a loser far more often than we perhaps thought.

According to a news story via Maxim, Las Vegas “gambling sources” told IB Fantasy Sports how Mayweather lost a monstrous $50 million in gambling losses last year alone. Of course we have no idea how accurate this story is, if there is even any truth to it, but there have been whispers that say Floyd needs cash. And an easy way for the self-proclaimed T.B.E (The Best Ever) to pick up a bundle to the tune of $100 million is to have that rematch with Pacquiao.

When we look at the prospective rematch, there is no motive for Floyd to take this fight other than to allow him to grab himself another small fortune. Mayweather has no interest in winning further titles any more than there is interest from him in beating any of the current pound-for-pound best fighters out there (these guys are far too risky a proposition). No, he just wants (or needs) the dough. And despite how dull (almost unimaginably dull) the first fight between Mayweather and Pacquiao was, there would be enough fan interest in a sequel to allow Floyd to net the kind of money he wants (or needs).

The rematch will sell, though not as well as the first bout. The way he lives his life, Mayweather may have to hope he can sell another big fight or two while he still can. $18 million for a watch, $25 million on a mansion, who knows how much money spent on cars and private jets…. and the list of Floyd’s extravagant spending goes on. Is there any chance Mayweather, with all he has earned and banked, could actually go broke (at least by his current standards) one day? Would you be shocked if this happened, pleased even?

It seems impossible for a man who has earned as much as Floyd has to lose it all, but the old saying goes like this: a fool and his money are soon parted. Is Mayweather a fool? Only time will tell, but right now fans are braced for Mayweather-Pacquiao II. Floyd will have a ton more gambling money to play with if the sequel comes off.

The word now, at least according to TMZ Sports, is that Mayweather is actually planning two comeback fights: one in Japan, possibly on New Year’s Eve, and then the Pacquiao rematch some time in 2019. According to “sources close to TBE (Mayweather),” who spoke with TMZ Sports, the Japan fight could be either a boxing event, or Mayweather may even fight an MMA bout in The Land of The Rising Sun; before tackling Pac Man next year.