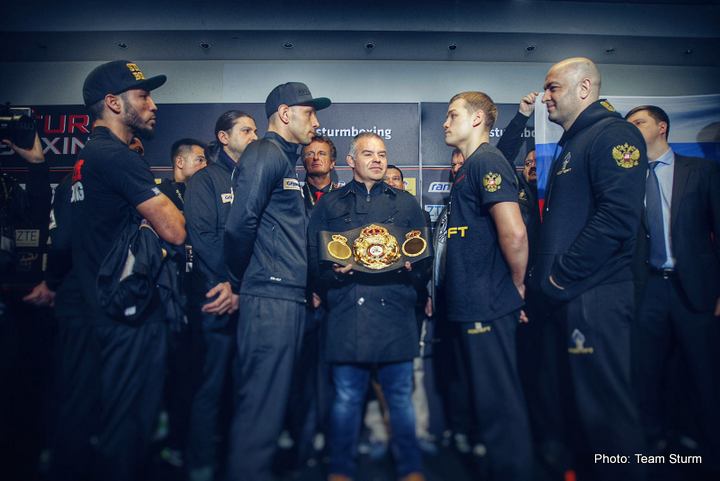 The hardman from Serpukhov near Moscow has forged a fearsome reputation as a fighting machine with his relentless pressure, non-stop punching and iron strength as he pounds opponent into submission as 10 of his 16 opponents have found out.

Chudinov, 28, will not be afraid of re-entering Sturm’s lion’s den again seeing as he’s fought and won away from home plenty of times previously with his passport also stamped in America, Dominican Republic and London.

A victory for Chudinov will certainly see him looking to unify the title against the hugely popular Armenian based German Arthur Abraham who holds the WBO crown, with also potential showdowns against WBC ruler Badou Jack and IBF Champion James DeGale.

Chudinov said, “I’m ready for Sturm a second time and I know that I can do the same again and emerge from Germany with my record and title still intact. I’m more confident than ever, but I haven’t taken Sturm for granted, he’ll be highly motivated to get his title back in front of his home fans and I won’t let that happen,”

“I thank my fans in the UK for their support and all the good luck messages they have sent me, I seem to have won a lot of new fans when I defeated Frank Buglioni there. Make sure you’re watching my fight against Sturm live on BoxNation tomorrow night and you will see something special.”

Sturm, from Cologne, hasn’t fought since the loss to Chudinov and for the German great it may be a final shot at world title glory in his illustrious 48-fight career that has seen him win four world titles.

The slick and stylish Sturm has operated at elite level since 2003 and has been involved in a staggering 22 world championship fights although he has rarely fought outside of his homeland.

Known simply as ‘The Fighter’, Sturm will be looking to break his own record as Germany’s only four-time world champion by capturing a fifth title if he gets revenge over Chudinov.

Live coverage will start on BoxNation at 7pm on Saturday night. To subscribe to BoxNation (Sky 437/490HD, Virgin 525, Freeview 255, TalkTalk 415, iPhone, iPad or Android and Amazon devices) for only £12 a month visit boxnation.com or to watch online subscribe at watch.boxnation.com