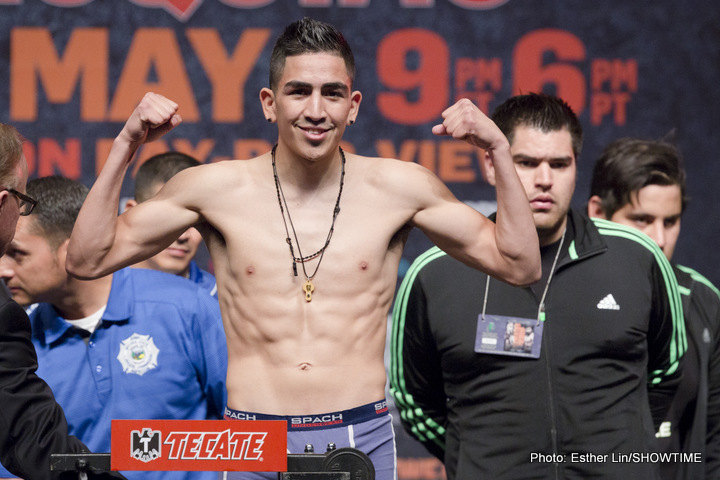 Santa Cruz worked out alongside his father and trainer, Jose Santa Cruz, for the media in attendance and spoke about his upcoming bout and more. The workout also featured a surprise performance from Martin Castillo and a five-piece band that included a tuba and an accordion. Santa Cruz jumped rope and went through drills while traditional Mexican folk music called Corrido filled the Southern California gym.

Here is what Santa Cruz and his father had to say Thursday:

“I always train to make a statement. I want to go out there and show everyone that I’m really good and I deserve to be considered one of the best.

“I fight for my family. Since I was small, this is what I’ve wanted to do to help my family. I wanted to work hard and give my family a better future.

“Martinez is a strong fighter who comes forward and always puts pressure on you. He never backs down and always comes to fight. That’s what we like about this matchup — it makes for a more intense fight.

“I think he’s going to be the aggressor because he’s shorter and has to fight that way. But I’m going to go forward and be the aggressor too. If that’s not working, I’ll box him. We’re going to do what we need to do to win the fight.

“I see Carl Frampton vs. Scott Quigg as a 50-50 fight. It’s a tough fight for both of them. I think whoever catches the other guy first will get the victory. They both can hit and they both have great skills. It could go either way.

“It’s a very interesting fight between Frampton and Quigg. They’ve both been possible opponents for me and I hope that I do well that night and face the winner of that fight. I don’t care who it is, I want to fight them.

“I’m willing to fight whoever. I want the winner of Frampton-Quigg. If not then Lee Selby, Gary Russell Jr., Jesus Cuellar or anyone in the division. Hopefully next it will be one of those fighters.

“My fighting style is to always go forward and throw a lot of punches. I just want to entertain the fans. I fight for them and I try to send them home happy. I want to go in there and fight in a war.

“I’m going to fight all of the top guys. I’m still young and I know if I keep working hard and taking care of the guy in front of me, I’ll get all of those fights.

“We’re working on our distance and learning new things every day in camp. I don’t want to change too much, since I’m undefeated. I’m going to be prepared mentally and physically to get the win.

“We’re working hard all the time. We know what we have to do in the ring to win the fight. My last fight our strategy was to brawl but we adjusted it and moved more and we were able to get the victory.

On his recent foray into boxing promotion: “Being a promoter is difficult. It’s very hard. You’re always busy, so right now I’m focused on my boxing career. I’m letting my brothers and my family take care of it now. I’m not there 100 percent yet but I like to give my opinion. It’s something I’d like to do after I retire.”

“Leo is very well prepared as he always is. We always train 100 percent and we are ready.

“The team is ready to fight. We have one week left to rest and put some finishing touches on this camp.

“It’s going to be a good fight. Whichever style Martinez brings, we’re going to out-maneuver him and make it a good fight. I see Leo winning a decision at least if not a knockout.”

Spain’s Kiko “Sensación” Martinez is a soft-spoken, hard-hitting former IBF Super Bantamweight World Champion and a three-time European champion at 122 pounds. He’s a come-forward, comes-to-win, aggressive-minded slugger who makes for exciting fights and has been in with excellent opposition.

The ultimate road warrior, the 5-foot-5, 29-year-old Martinez has fought more than one-third of his fights outside his native Spain, where he has tussled 26 times. He’s also fought four times in Ireland, three times in England, three times in Northern Ireland and one time each in Japan, Argentina, France and South Africa.

So don’t expect Martinez (35-6, 26 KOs) to be in awe of the surroundings in his second start in the United States when he challenges unbeaten, defending featherweight world champion Leo Santa Cruz (31-0-1, 17 KOs) on Saturday, Feb. 27, in the main event of a SHOWTIME CHAMPIONSHIP BOXING tripleheader live on SHOWTIME (10 p.m. ET/7 p.m. PT) from Honda Center in Anaheim, Calif.

Martinez won his U.S. debut and the IBF 122-pound crown with a sixth-round TKO over Jhonatan Romero on Aug. 17, 2013. “That was a great night for me,’’ Martinez said. “I’m confident of another great performance on Feb. 27.’’

A winner of three in a row in his homeland, including a fourth-round TKO over Miguel Gonzalez last Dec. 12, Martinez aims to make amends after losing three high-profile fights in recent years to super bantamweight world champions – twice to Carl Frampton (IBF) and once to Scott Quigg (WBA).

Martinez gets an opportunity against Santa Cruz in a fight he never saw coming.

“I’m thrilled to be fighting Leo Santa Cruz, but getting this fight was a total surprise because I already had a fight scheduled,’’ said Martinez, who trains at his friend and manager, former world super middleweight champion Sergio Martinez’ gym in Spain. “I had been scheduled to fight for the European title. When this opportunity came up, I decided to give up the European title to come to America.

“I was very happy and very emotional when I heard about this fight. It was one of the best days of my life when I agreed to fight Santa Cruz. Now, more boxing fans will get to see me. I will not take one step back. I will come forward the whole fight.

“I’m thankful to SHOWTIME and I’m excited for the challenge. It’s a huge fight in the United States and a great opportunity. Some people don’t think I can fight because I lost to those guys [Frampton and Quigg], but they are wrong. I am as determined as ever. I’m going to fight a great fight and come out with a victory.’’

While respectful of the champion, Martinez is no stranger to fighting on foreign soil and is poised to pull off a stunner.

“I will surprise many people who don’t believe in me,’’ he said. “I’m working so hard for this fight. People doubting me has me even more motivated. They will see on Feb. 27 and everyone will change their minds.

“I love fighting in my opponent’s backyard. That is not a problem for me at all. People who know boxing know I will give everything to this sport. I want to give great shows and entertain people. I’m coming forward and throwing punches and I don’t give up.

“I’m going to give 100 percent and it’s going to be a tremendous fight. I have a ton of respect for Leo Santa Cruz. He’s a world champion and a great fighter who’s clearly one of the very best featherweights in the world and a Top 10 pound-for-pound fighter. I am very conscious of that point.

“Leo and I are true warriors so this will be a brutal war. But I have what it takes. I’ve been working very hard with my longtime trainer, Gaby Sarmiento, and I will be victorious.’’

A lifelong resident of Spain, Martinez was born in Granada, Spain, and resides in Alicante. He has two sisters and two brothers but is the only one in the family who boxes professionally. He turned to boxing as a young teenager.

“I started in boxing because when I was about 13 I was smaller and other kids bullied me all the time. So I began looking for a way to learn to defend myself,’’ he said. “Once I decided to start boxing and dedicated myself to it I fell in love with the sport.’’

As an amateur, Martinez went 47-2 and won a Spanish national amateur championship, but he had no international amateur experience. “I had a good amateur career but never thought about the Olympics,’’ he said. “My mind was always on being a pro fighter.’’

A dangerous puncher who’s at his best when he pressures his opponents and wears them down, Martinez turned pro in June 2004. He was victorious in his initial 17 fights, winning all but three by knockout.

Martinez met Sergio Martinez [no relation] about nine years ago. “I met Sergio in the gym in Spain that he used to train himself in and we became good friends. When I started boxing I looked up to Julio Cesar Chavez and I am now a big fan of Marcos Maidana. I like to fight like him.

“But I’ve always had a special relationship with Sergio, who inspired me because he came from poverty like me. He has taught me so much. It’s like looking into a mirror because he knows where I came from. He’s taught me so much inside and outside the ring. We were very poor growing up and my father worked very hard.’’

If triumphant, Kiko Martinez says “I would like to stay at this weight because I feel much stronger. But I would definitely love a rematch with Frampton or Quigg.’’

“Frampton will win against Quigg,’’ Martinez said. “He’s the more complete boxer. He is stronger as well.”

In the Feb. 27 co-feature on SHOWTIME CHAMPIONSHIP BOXING, hard-hitting Mexican warriors Julio Ceja (30-1, 27 KOs) and Hugo Ruiz (35-3, 31 KOs) will box in a rematch of an exciting, two-way slugfest for the WBC 122-pound world title that Ceja won from Ruiz on a fifth-round knockout last August

Rounding out the televised tripleheader is a 10-round fight between undefeated heavyweights Gerald Washington (16-0-1, 11 KOs) of Vallejo, Calif., and Montreal-based Colombian Oscar Rivas (18-0, 13 KOs).