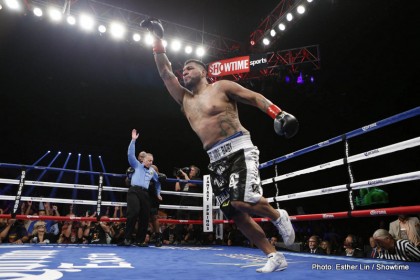 INDIO, Calif. (Sept. 7, 2013) – Chris “The Nightmare” Arreola made short work of Seth Mitchell, dispatching the younger fighter in just 2-minutes 26-seconds of round one in the main event of Saturday’s SHOWTIME BOXING: Special Edition from Fantasy Springs Resort Casino in Indio, Calif. In the co-feature, Efrain Esquivias stopped Mexican legend Rafael Marquez in the ninth round of their 10-round junior featherweight bout.

Arreola of nearby Riverside, Calif., came into the fight feeling that Mitchell was out of his league. And he proved it.

A well-conditioned and poised Arreola landed a clubbing right hand in one of the first exchanges of the bout. Mitchell was stunned and already on wobbly legs. Following a push down, and moments later a clean knockdown, veteran referee Jack Reiss halted the action late in the round as Mitchell was unable to defend himself against the power punches of “The Nightmare”.

“I want to thank myself for putting the work in,” said a fresh and jubilant Arreola after the stoppage. “I worked my ass off in Phoenix preparing for this fight. I respect Seth for his power, but the big difference for me was in training camp.”

Arreola’s lack of preparation for big fights has been well documented. Coming into Fantasy Springs, he knew he needed to prove to his team, boxing fans and, most of all, to himself that he was not a shot fighter and certainly no stepping stone for Seth Mitchell.

“I have been my only downfall,” he continued. “I should only have one loss on my record. All my other losses are on me for not training properly. But I came here to win tonight. And it was easy work.”

A stunned Mitchell said, “I got caught. I am very disappointed. I was confident in my ability to win this fight. My heart just hurts right now. This was a big fight for both of us, a fight that I wanted. I didn’t want to step back after beating Jonathan Banks.”

For Marquez, the Mexican warrior who is likely bound for the Hall of Fame, his reflexes and power simply were not there against the younger challenger. In his first fight back in nearly a year, the former two-division world champion may have had his dreams of fighting for another world title dashed by a resurgent Esquivias.

Esquivias (17-2-1, 9 KO’s), of Gardena, Calif., found a home for his right hand by the fourth round. He was able to land it seemingly at will as the fight progressed. Gaining confidence in the middle rounds, Esquivias began to land the left hook to the body, further slowing the fading legend.

Esquivias drilled Marquez with a lead right hand in the ninth sending Marquez down. After a brief look, referee Raul Caiz Jr., waved it off without a count. “I am slow starter,” said an emotional Esquivias after the bout. “He caught me early, but I finished strong and that’s what matters.”

When asked about beating a legendary warrior, “It means everything. He’s one of my favorite fighters. When he beat Tim Austin I became a big fan of Rafael. Now, I am in the ring with him and it’s a huge honor. I am still his biggest fan. He’s a great champion.”

Mitchell vs. Arreola, a 12-round heavyweight fight, is promoted by Golden Boy Promotions in association with Goossen Tutor Promotions and sponsored by Corona and AT&T. In the 10-round co-feature former two-division world champion Rafael Marquez, of Mexico City, returns to the ring to take on Efrain Esquivias, of Gardena, Calif., in a featherweight bout.