Who will Anthony Joshua fight next? There are a few names in the hat as far who Joshua’s dance next partner might be – including Chris Arreola. Arreola spoke with ESNews, and “The Nightmare” confirmed that a fight between he and Joshua has been in the works. Arreola says he very much wants the fight, that he would take it “here, there, wherever you want it.”

Nothing has been confirmed yet, and Joshua has not spoken publicly about who his next opponent will be, but Arreola seems to be in the frame. 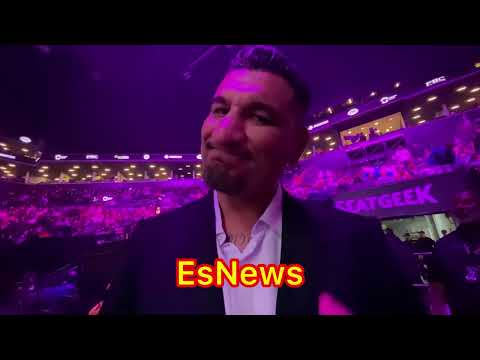 But how would the fans react if this fight was made? Arreola, now 41 years of age, has not boxed since his May 2021 decision loss to Andy Ruiz. Arreola, 38-7-1(33) dropped Ruiz early and he pushed the former champ hard all the way in what was a good action fight. So based on his last fight, Arreola still has something left in the tank; even though the Ruiz fight was some 17 months ago. Arreola also has as ton of experience, having been in with everyone from Vitali Klitschko to Deontay Wilder, from Bermane Stiverne to Adam Kownacki.

But can Arreola give Joshua a fight, a test, at this late stage in his career? It’s easy to imagine the negativity a good number of fans would have towards this match-up. However, Joshua, 24-3(22) is coming off two losses himself and, in the opinion of the experts, the former two-time champ needs a good confidence builder of a comeback fight. And Arreola does have name value.

Arreola may not be a fight fan’s preferred pick for who Joshua should fight next, but this doesn’t mean the fight will not happen. Joshua and his people have not been in talks with Arreola for nothing, after all. Maybe this one will get over the line. If it does, how will YOU react? Joshua Vs. Arreola – buy or sell?