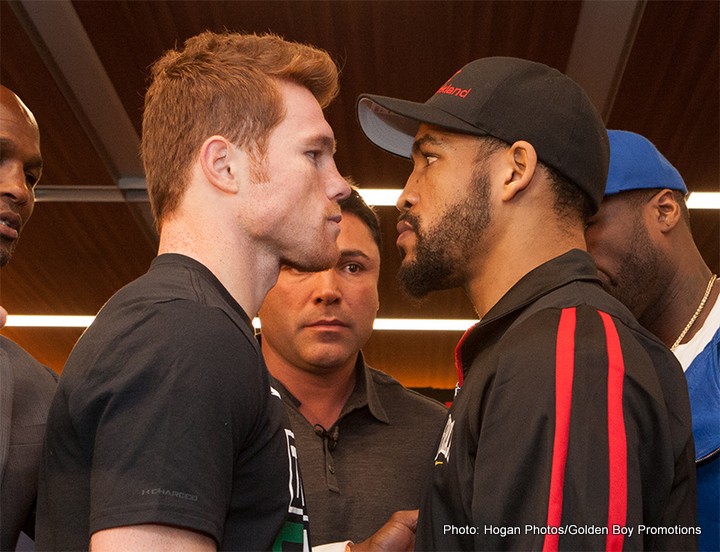 Mexican star Saul” Canelo” Alvarez (44-1-1, 31ko) has vowed to “bring it” when he faces James Kirkland (32-1, 28ko) in Texas on Saturday, filling the action void the casual fans in particular feel was missing from last weeks May-Pac fight.

The 24 year old, who is still struggling with his English, has spoken out via interpreter/Golden Boy matchmaker Eric Gomez ahead of Saturday’s clash. Speaking at the various media events this week he said;

“It motivates me that so many people have come out and I want to do the best I can for my fans. They are responding greater with every event we have here. From the fight fair to the workout – and more are showing up. When the fight comes…..this is the real Cinco De Mayo weekend.”

After the poorly received “Fight Of The Century” and the careers of it’s protagonists winding down, Canelo is keen to stamp his name as a future P4P star with a solid performance against Kirkland.

“You’re going to see a more explosive Saul. I had 16 weeks to prepare for this fight. I’m faster, stronger and have more experience.”

“Kirkland is very strong and dangerous and a big puncher. I’ve trained so hard I’m prepared to go the distance if I need to. Every fight for me now is dangerous and tough, that’s how I’ve prepared.”

I don’t think I’m the only person out there who believes this could well be a short night for Alvarez. For me Kirkland’s chin is as questionable as his decision to drop Ann Wolfe once again for this fight. After Ishida his chin will forever be an issue and he was also down early against Alfredo Angulo – although he survived an early onslaught in that fight, decking Angulo back and going on to win.

It really depends what version of the oft troubled “Mandingo Warrior” turns up. He’s limited and crude enough as it is without coming into this unfocused and with the unknown and un-heralded trainer he’s employed for the contest. He also hasn’t boxed in 18 months, having had only two fights in a little over three years.

This is the reason I think some may be left a little disappointed here too, although for many a round or two of toe-to-toe action before James gets stopped will be far more digestible than 36 minutes of whatever you choose to call last weekends fight.

Either way, following this fight, Canelo may miss out on the Mayweather rematch he claims to want as Golden Boy just filed suit against Al Haymon for Ali Act breaches. Probably fortunate for Canelo in honesty after what happened the first time.

Of that contest, Alvarez said via a press release;

“I would love it. (Floyd rematch) It would interest me. I’ve learned more things, got more experience but right now this fight is what’s important to me – James Kirkland on Saturday.”

READ:
Smith Jr. W 10 Hart: The Terrible Scoring Of One Judge Should Not Take Anything Away From A Great Fight

It’s more likely we will see Alvarez face Miguel Cotto next, most probably at a catch-weight in the Autumn. According to many sources it’s all but a done deal given neither slip up in the meantime.

“My goal is to always fight the best in the world so that the fans get what they want – the best fights possible. As long as they’re at the top, I want to fight the best.”

I guess we’ll let him off with Kirkland then! Probably deserves it after the Lara fight anyhow!

As always, thanks for reading. All my boxing stuff on Twitter @Undilutedpoison