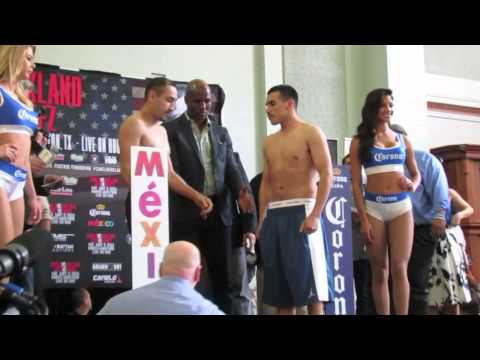 Only one blemish for this event and it’s not a small one: the Soto-Gomez undercard has been officially canceled.

Initially, this was to be fought at a max weight of 141 LBS. Team Soto became aware of Gomez’ weight struggles about a week ago and even agreed to change the weight to 145 LBS. maximum.

Gomez lack of discipline puts this blemish on the card.

However…the show must go on!

The live action from Minute Maid Park in Houston begins with an exciting 10-round super lightweight showdown between Humberto Soto and Frankie Gomez.

The main event pits Canelo Alvarez, making his 2015 debut, against James Kirkland in a bout scheduled for 12 rounds.

The replay of Mayweather vs. Pacquiao opens up the three-fight telecast. 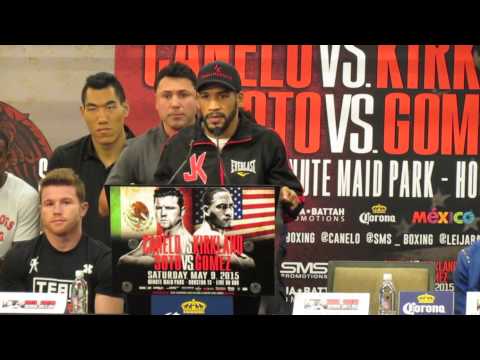 The final press conference for the Canelo-Kirkland Texas war took place on Thursday 05/07/2015.

The footage and images speak for themselves.

All camps are ready to deliver excitement to everyone in attendance and tuning in on HBO.

The official weigh in will take place on Friday live from Minute Maid Park’s Union Station!

Read:  Boxing’s Best of 2022: East Side Boxing Hands Out its Annual Awards! 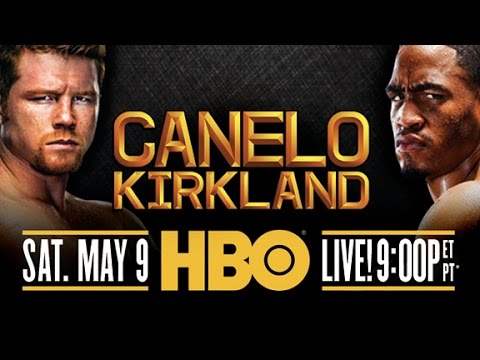 KNOCKOUT OR DECISION? MEDIA EXPERTS GIVE THEIR PICKS FOR CANELO VS. KIRKLAND

THIS SATURDAY, MAY 9 FROM MINUTE MAID PARK IN HOUSTON AND TELEVISED LIVE ON HBO WORLD CHAMPIONSHIP BOXING®

HOUSTON (May 8) – Media experts are making their predictions for how the showdown between heavy hitters Canelo Alvarez (44-1-1, 31 KOs) and James “Mandingo Warrior” Kirkland (32-1, 28 KOs) will end on May 9 at Houston’s Minute Maid Park. Given the power of both fighters, all agree that this fight will be explosive in the ring and action-packed from start to finish. The experts we polled overwhelmingly agree: this fight will end when someone gets knocked out.

Here’s what they had to say:

“Canelo for the knockout.”

“Sometimes, the best fights are the most predictable ones. In regards to Canelo Alvarez and James Kirkland, we know who they are, and we know what they will bring to the table, that’s why this fight promises to be so exciting. While I expect some grueling and tough early-round exchanges, Canelo will be happy that he doesn’t have to go searching for Kirkland. Canelo’s punching accuracy and his ability to move in and out of range quickly will help him overwhelm Kirkland and earn a late-round stoppage.”

“I would be extremely surprised if this fight goes the distance. This has explosive written all over it and fans should enjoy it for as long as it lasts. I think Kirkland will present some problems for Alvarez. I think the absence of trainer Ann Wolfe will play a large role in the fight. She always knew what buttons to push to get Kirkland motivated. I expect Alvarez to mix up his attack, working the body constantly, and leading to a late-round stoppage.”

“I think it ends in a knockout. This one has early stoppage written all over it. In fact, Kirkland’s reckless, fan-friendly style will make sure of it. Canelo will be forced to stand and fight, where his stronger technique will win out. But not before having his chin and backbone tested.”

“I just can’t see Canelo-Kirkland being a distance fight regardless of who wins. Kirkland’s best chance is to jump on Canelo early and rattle him before he settles into his rhythm. But the most likely scenario is Canelo surviving the early firefight to break down Kirkland in the mid-rounds, stopping him in the seventh or eighth round.”

“I like Canelo by TKO, probably around the seventh round. Both are strong punchers, but Canelo has the edge in ring generalship.”

“Kirkland’s been wanting this fight for a long time. The long layoff won’t affect Kirkland in the ring. A refined slugger, I predict Kirkland in a knockout that will catapult his career to new heights.”

“In my opinion, in spite of the power of both Canelo and James, I believe the fight will go the full length because the fight will be a tactical one. Each fighter knows the power of they both have and a KO will occur if they take unnecessary risks and go for a knockout. Therefore, they will both fight a tactical fight in an attempt to win via the judges’ decision.”

“A fistic delight when hard-hitting Canelo Alvarez defends his reputation against Texan tough guy James Kirkland. While I expect plenty of good quality brawling from these two grinders, I believe Canelo knows better than to indulge in any risky, long-term shootouts with a slugger like Kirkland, and I predict that the redhead from Guadalajara will box, and definitely punch, his way to a unanimous decision.”

“Kirkland is dangerous because he’s aggressive and hits hard, but Canelo is a better boxer by a long shot and hits very hard. I think he’ll systematically break Kirland down and stop him midway through the fight.”

“In what will be an entertaining back-and-forth affair, I think the steadiness and consistency of Saul ‘Canelo’ Alvarez will eventually tame and subdue Kirkland. Kirkland’s aggression and mentality always make him a dangerous foe, but I worry about his protracted layoff. I like Canelo via KO in the 10th round.”

“Canelo-Kirkland is the kind of matchup that screams knockout. Both fighters come ready and willing to engage. Both are excellent offensively and solid punchers. And both men need the win. It will be an all-action slugfest between two outstanding junior middleweights, and I believe it will end in someone being concussed put down for the count. Kirkland is exactly the kind of fighter who brings out the best in Alvarez. He’ll come forward, land thudding punches and make Alvarez respond in kind. But Alvarez is one of the best in the biz. He’ll use his better footwork and faster hands to land a higher volume on punches as the fight wears on and by Round 10 the fight will be over. Alvarez will be the winner by TKO.”

“Canelo by TKO, probably around the tenth round.”

“I think Canelo will knock Kirkland out in the ninth round after they engage in a slugfest for most of the fight. Kirkland has an edge in power, but Canelo also has power and he’s a much better technical boxer. Eventually he will pick Kirkland apart and then drop him.”

“I’m picking Canelo in a seventh-round knockout, provided he can get through Kirkland’s power in the early rounds.”

“Someone is hitting the deck, and staying there, on Saturday in Texas. Bombs will explode, and I think will damage Kirkland, sans Ann Wolfe, more than the Mexican.”

Canelo Alvarez vs. James Kirkland is a 12-round super welterweight bout presented by Golden Boy Promotions in association with Canelo Promotions, SMS Promotions and Leija*Battah Promotions. The fight will take place Saturday, May 9 at Minute Maid Park in Houston and is sponsored by Corona Extra, Mexico – Live it to Believe it!, Fred Loya Insurance and O’Reilly Auto Parts. Doors open at 11:00 a.m. CT and first bout starts at 11:10 a.m. CT, the HBO World Championship Boxing telecast begins at 9:00 p.m. ET/PT.