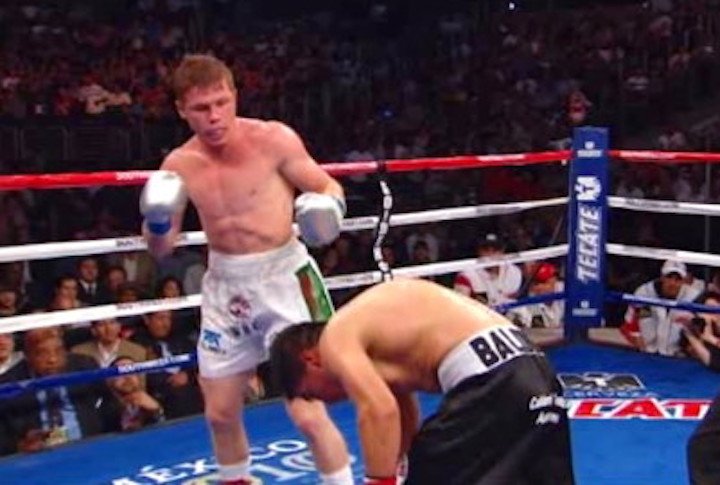 A decade ago today, when fighting on the undercard of a fight between Sugar Shane Mosley and Sergio Mora in Los Angeles, a young, primed for stardom Canelo Alvarez scored an exquisite, one-punch KO that the Mexican may still not have topped in terms of a career-highlight knockout. Canelo was just 20 years of age and he went in with a veteran in former welterweight champ Carlos Baldomir.

Baldomir might have been 39 years of age and past his best, yet he still had a reliable chin; a chin almost nobody had ever managed to crack (Baldomir having been stopped just once prior to facing Canelo, this in his seventh pro fight, this way back in 1994). Canelo and Baldomir fought at an agreed weight of 151 pounds, with “Tata” actually coming in at a little over the 153-pound mark (and being fined as a result) and the young Mexican who would go on to be the face of boxing wound up scoring a sensational KO.

It was a dominant performance from Canelo all the way, but it did perhaps start to look to some as though the fight might go the distance. But then, in round-six, Canelo unleashed a beautiful left hook that landed flush on the chin the likes of Zab Judah, Floyd Mayweather, Arturo Gatti, and Vernon Forrest had failed to put a dent in. Down the Argentine went, hard, on his face, out. Baldomir instinctively tried to rise, his inner warrior kicking in, yet he was done. Canelo’s growing army of fans loved it.

Nobody had ever taken Baldomir out in such a violent manner, and no fighter would match Canelo’s handi-work – with Baldomir retiring just seven fights later. Baldomir correctly predicted how the man who had left him face-planted would go on to become a world champion. Sadly, and shockingly, a retired Baldomir would be jailed for sexual assault on his own daughter (aged just seven at the time of the first attack). A sickening end for a man who once ruled the world.

As for Canelo, he went from strength to strength after blasting out Baldomir, until he too was befuddled by Mayweather, this in 2013. Canelo then came back even stronger, eventually taking over from Floyd as the biggest star in the sport. And here we are today, awaiting Canelo’s next fight, his next big KO. The streaming network DAZN, now embroiled in a legal war with Canelo, didn’t even exist at the time of the Canelo-Baldomir fight.

How many more scintillating KO wins will Canelo score before his career comes to an end? And how soon before he fights again?