Brandun Lee did it again last night. In his biggest test to date, the 21-year-old 140 pounder scored a chilling knockout over the experienced, previously unstopped (and never down in any fight) Samuel Teah. Lee of La Quinta, California, born in Yuba City, landed a monster right hand that put Liberian-born Teah’s lights out the second it landed. This was one of those KO’s that elicits ‘oohs,’ and other noises that signify a fan’s shock at witnessing the destruction. Lee, who had Teah down from a combination moments before closing the show in hugely impressive fashion, is now 22-0(20) and he has now won his last 13 fights by KO. Teah, the older man by some margin at age 33, falls to 17-4-1(7).

Right now, fight fans have two outstanding prospects/contenders who are busily catching fire due to their consistent KO’s. We have Lee, who is really making a name for himself at 140 pounds, and we have Edgar Berlanga, who has stopped each and every one of his super-middleweight opponents in reaching an amazing 16-0(16) – with all of the New Yorker’s wins coming in the very first round. Lee and Berlanga have yet to face any elite-level opponents, yet both men have not been fed patsies. Lee’s last seven foes had winning records, while all but two guys, who were making their pro debut against Berlanga, entered the ring with him whilst sporting a winning record. 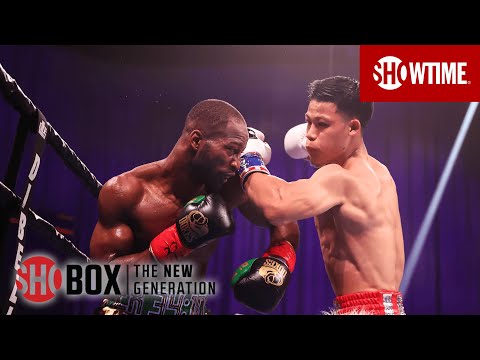 Fans love a big puncher, and right now we have two young, exciting and naturally heavy-handed up-and-comers to really start getting excited about. What a shame Lee and Berlanga are not fighting in the same weight division! Now that would be an explosion of a fight. Berlanga is set to return to action in April, for his first fight of 2021. The 23-year-old known as “The Chosen One” has said he will move up in class this year, and he also said he hopes to “get some rounds in.” It really is astonishing that a fighter can get 16 guys out of there, all inside a round. Lee, who has yet to see round number-five in a pro fight, has also stopped a few fighters who had never previously been knocked out or stopped. Both Berlanga and Lee have a lot to prove: can they take a great shot, how will their stamina hold up when (if) they are taken into the later rounds of a hard fight, and so on. But the future looks bright for both young fighters who have shown skills as well as brutal punching power.

We’ve been given some highlight-reel KO’s from both Berlanga and Lee, but last night’s sick knockout of the durable Teah might just be the most impressive piece of handiwork shown by either man. Rest assured, Berlanga will be looking to thrill his fans with more destructive displays in his future fights. How far can these two ultra-promising bangers go? Lee fought four times last year, while Berlanga boxed three times in 2020. Let’s hope both exciting fighters remain busy this year. Who doesn’t want to see more of this pair of pure punchers?