Roberto Duran’s most celebrated rivalry is arguably the one he had with Sugar Ray Leonard. The first fight Duran had with Leonard is ranked by all as an absolute classic (it’s Mike Tyson’s favorite fight), while fight two is famous, or infamous, due to what Duran did in the eighth round, as well as for the two words, he (allegedly) said – these being “No Mas.” Fight-three was a dud, yet the very real hate Duran had for Leonard remained.

But Duran had another three-fight rivalry during his career, this down at lightweight, Roberto’s peak fighting weight. Puerto Rico’s Esteban De Jesus entered Duran’s life on November 17th of 1972. What followed was violent, beautiful, unforgettable, and, in the end, incredibly moving.

Duran, aged 21 and yet to reach his peak, had ripped the WBA lightweight title from Ken Buchanan in June of that year, and against De Jesus, Duran was taking a non-title fight, his third in a row. But while Duran had made short work of both Greg Potter (KO1) and Lupe Ramirez (KO1), De Jesus did the unthinkable inside Madison Square Garden.

De Jesus was a year older than Duran, and he was sporting a 33-1 record, the sole loss coming against Antonio Gomez, who won a ten-round unanimous decision over De Jesus in December of 1971. Largely unknown to the majority of fight fans, De Jesus had nevertheless won his last seven, and he was about to make his name on the world stage.

Duran – who had been in a car crash prior to the fight and had suffered an injured elbow and lacerations to his mouth – was stunned mere seconds into the fight. De Jesus uncorked a perfect left hook, and it caught Duran flush, sending “Hands of Stone” down for the first time in his 32-fight pro career. Both hurt and embarrassed, it took Duran some time to fully recover from the blow, if he actually fully recovered at all.

De Jesus, his left hook and his combinations serving to give Duran fits, was in control of the fight pretty much all the way. Keeping Duran off-balance and unsure of himself, De Jesus was boxing brilliantly. Duran looked strangely sluggish, flat-footed, the fire in his belly not there. In the end, the decision was unanimous for De Jesus.

These two greats would have to meet again.

Duran and De Jesus did fight again in March of 1974, this time in Panama City, this time with Duran’s world title on the line. Duran knew he could never afford to let his countrymen down. This time, knowing how good, how dangerous De Jesus was, Duran had trained as hard as he could have trained. That first loss had stung Duran, and he wanted so badly to make De Jesus pay.

But it seemed as though De Jesus would repeat his big win. Just as in the first fight, De Jesus sent Duran to the mat in the opening round, courtesy of his left hook! Duran left himself open, and De Jesus capitalized. But this time, Duran had the fire, and he roared back from the knockdown, forcing his rival into something akin to a street fight. De Jesus managed to hang tough for a while. Downed by a Duran right hand in the 7th round, De Jesus was fading fast. Duran worked his man over some more before finally stopping De Jesus in round 11. 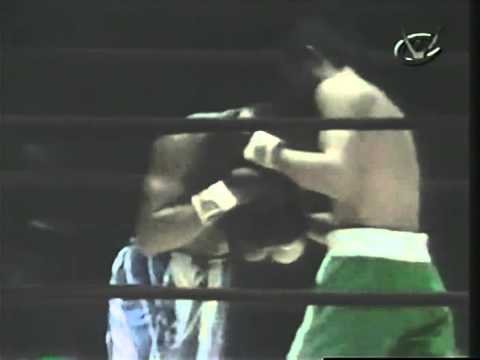 The rubber match came in January of 1978, the fight this time taking place in Las Vegas. Duran, by now at his ferocious best, having reached his peak, wanted nothing more than to prove his superiority against De Jesus, who now held the WBC lightweight title. Duran boxed magnificently in the third fight. With his fine skills on show for all to marvel over, Duran showcased a combination of masterful, clever boxing and sheer aggression.

De Jesus had some success early, but then Duran took over and bossed the action. In round twelve, Duran beat De Jesus to the punch, landing his crushing right hand a split second before De Jesus threw his. De Jesus went down hard, with only raw courage seeing him get back up. Duran put the finishing touches to his night’s work, hammering De Jesus until his rival’s corner had no choice but to signal surrender. Duran had unified the titles, and, more importantly, he had won the series with his most testing foe.

In later years, the two warriors having more than earned the respect of one another, Duran and De Jesus experienced vastly different fates. De Jesus, having become addicted to heroin and cocaine, killed a man and was sent to jail for life. Whilst in jail, De Jesus tested positive for AIDS, infected with drug needles having passed the lethal virus into his body. Duran was informed and, in a genuinely moving moment, Roberto visited De Jesus in the hospital in Puerto Rico as his former rival lay dying. Duran leaned over and hugged Esteban, the image shooting across the globe. De Jesus died in May of 1989. Duran, at this time, was still fighting and winning titles.

But no man ever had as much of an effect on Duran as De Jesus did. In and out of the ring.