The fight between defending heavyweight champion Larry Holmes and rugged, life-loving challenger Randy “Tex” Cobb, is famous for a few reasons. The fight – that took place 40 years ago today – saw Cobb prove that toughness, desire, and a hell of a sturdy chin can see a man so badly outclassed see it through all 15 rounds against a fine champion if he really wants it enough. But most of all, the Holmes-Cobb fight is famous as it saw the end of Howard Cosell as a boxing commentator.

Why? Because Cosell, who had seemingly been around the ringside apron forever, couldn’t stand the sickeningly one-sided violence he was being paid to comment on this night. Some of the things Cosell said in describing the thoroughly unpalatable (to him) action: 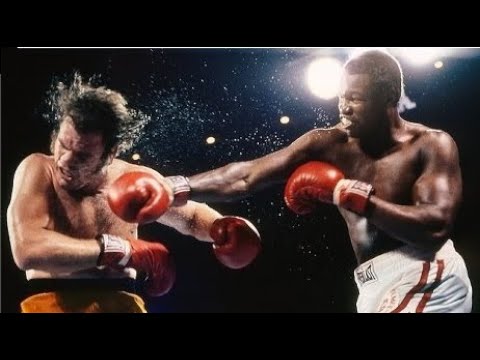 “This is as brutal a mismatch as I think I’ve ever seen.”

“I hate to see anybody take this kind of punishment.”

“Holmes is not responsible for the officials here, but it seems to me someone should think about the degree of punishment.”

Okay, you get the picture.

“Punishment,” a word Cosell was fond of using during the broadcast of this fight, was being dished out by the at his peak Holmes. And yes, sure, Cobb and his rock for a head took plenty of hurt. But had Cosell never seen a brutal fight before? He sure had, yet he took particular umbrage when calling this fight. It has been said (never proven) that Cosell was actually annoyed at the way boxing, the sport he loved, had fallen drastically in popularity, falling way behind football, and he was looking for a way out anyway. Who knows?

But Holmes-Cobb, though it was no Vitali Klitschko-Shannon Briggs (that fight surely THE unwitting poster-fight for most savage and damaging one-way heavyweight title fight to go the distance during modern times; and heavens knows what Cosell would have thought of that fight!), was a one-sided beatdown. Yet try as he may, with his superb left jab and with the hefty right hands he landed behind it, all to the chin and head, Holmes could not put a dent in Cobb. But Cosell was not impressed by the toughness and durability of Tex. Howard was, he said, disgusted at the barbarity, to the point that his microphone would never again be used in the calling of a pro fight.

Cobb, though, despite being so badly beaten, was just getting going – as a chat show guest to die for, as a movie actor, and as the man who arguably gave his sport some of its most memorable, witty and sharp lines. Cobb was a guest on The Johnny Carson Show after the Holmes fight, he was a guest on Letterman numerous times, and Cobb gave one of the most hysterical turns ever when he spoke at Larry Holmes’ roast in the early 1990s (watch it on YouTube and check out Larry’s very real tears of uncontrollable laughter).

Cobb had lost every round against Holmes, yet he himself had plenty of fun with the result.

“I had him, but I ran out of time,” Cobb said afterwards.

“Larry told me no way he would give me a rematch; his hands couldn’t take the abuse.”

“I was never what I would call hurt; I was in a perpetual state of frustration.”

“For ten rounds, my corner told me, ‘Keep going, his legs can’t take the pace.’ In the last five rounds, he was saying, ‘You got him now, keep pressing. His legs are good but his hands are gonna fold.’”

Holmes and Cobb became quite friendly after the fight (Holmes writes in his fine autobiography that he got “sick of talking to Cobb, he would call me all the time!”) and while their fight is no classic, it is, when watching it today, a graphic display of one man’s superb skill going up against another man’s simply incredible courage.

Cosell missed that. He wasn’t impressed. But let’s leave the final word to Tex Cobb, who said, upon hearing how Cosell had hung up his boxing mike as a result of the fight, the following: “I can do my sport no greater service.”

Cobb could fight (it should be remembered that he defeated Earnie Shavers, Bernardo Mercado, and that he fought Buster Douglas to a majority decision), and everyone knows how Tex could damn sure take a punch. But Randy Cobb’s finest talent was that of making people smile and laugh out loud. Tex Cobb was/is a true one-off.