ZACH PARKER’S SHOT at the WBO Interim world super middleweight title against John Ryder was aborted at the end of the fourth round when the Derby man was unable to continue due to a hand injury.

In what was shaping up to be an exciting and evenly-contested fight, the previously unbeaten Parker appeared to be edging the rounds and was ahead 39-37 on two of the scorecards, with the other being even. 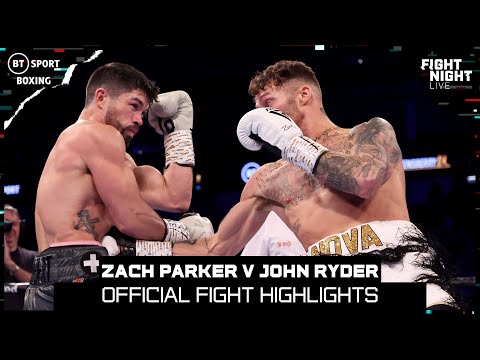 It was a bitter disappointment for the fans inside The O2 and for Parker, who was making confident strides towards full world title contention.

“Zach started well, got behind the job well and was peppering me a bit there,” reacted John Ryder afterwards. “I felt like the tide might be starting to turn and I was getting more on top, but these things happen in boxing. It is a bad injury for him and it feels like half a robbery victory for me.”

“Obviously I am absolutely gutted,” added Parker. “It was at the start of the round, I hit him with an uppercut and you can see from my hand that it is out now. He is obviously a good lad who will go on and do good things in boxing and I will come back stronger.

“I was warming into the fight and it was becoming a good fight. When the injury happened at the start of that last round I kept having to move because every time I jabbed him it was hurting and clicking.”

Sheeraz, now 17-0, set about his Coventry opponent right from the off with spearing jabs to which Wilson-Bent had no reply. Sheeraz’s dominance extended into the second round and Wilson-Bent was put down and referee Victor Loughlin decided he had seen enough with 2.55 on the clock.

A blitz of body shots from Sam Noakes in the fourth round saw the Maidstone man realise his goal of a perfect 10 wins and 10 KOs with the stoppage of the previously unbeaten Calvin McCord to win the Commonwealth lightweight title.

It was also a defence of Noakes’ WBC International Silver belt and, after pretty much dominating the first three, the 25-year-old went for the jugular in the fourth and McCord went to the canvas on four occasions before referee Victor Loughlin had seen enough after 2.14 of the round.

In what was a mature performance, The Menace was more measured and patient in his work from his typically wide stance. Ham had few answers and was in trouble on each occasion McCann chose to let his hands go in the fourth, fifth and eighth.

The eighth turned out to be the last when a right uppercut stunned the Scot and the follow-up assault convinced referee Marcus McDonnell to wave it off with 2.28 on the clock.

McCann moves to 14-0 and a third professional title following on from his WBO Youth and WBC International Silver successes.

The Dubliner moved to 11-0 and, at first, it looked like it might be a speedy night’s work when a massive right from O’Leary saw the Namibian touch down.

Mungandjela, while for the most part being overwhelmed, still chose to engage in a firefight and O’Leary took more shots than his trainer Alan Smith would have liked. He actually recovered well in the fifth round and enjoyed some success, but then ended up grounded again just before the bell following a left hook topping up a big right.

Mungandjela continued to show remarkable defiance and bravery, looking like he might be out in the ninth when he was rocked again by the right hand of O’Leary. He saw it through until the end when the scorecards read 99-90, 99-89 and an unlikely 96-92.

Tommy Fletcher made it a professional treble with a win in his third fight against Jiri Krejci. He also made quick work of his Czech opponent and the fight was over when the Norfolk Nightmare ripped in a short and devastating left uppercut that left Krejci out for the count after 2.19 of round one.