Gary Russell Jr. says the cherry-picking that Gerovnta ‘Tank’ David has been doing with the help of his promoters at Mayweather Promotions almost bit him in the backside in his last fight against former WBA secondary 140-lb champion Mario Barrios last June.

They picked arguably the weakest of the champions at light welterweight for Tank Davis (25-0, 24 KOs) to fight, and he was losing so bad that his promoter Floyd Mayweather Jr. had to go up to his corner after the seventh round to tell him how desperate things were looking.

WBC featherweight champion Russell Jr. says that Team Tank Davis is trying to “bamboozle” the public by cherry-picking and then trying to tell the boxing public that he’s fighting the best.

Davis, 26, beat Barrios by an 11th round knockout on June 26th to save himself from suffering his first career loss. Tank won’t be defending his WBA 140-lb title, as he plans on campaigning at 130.

The criticism that Gervonta is getting from boxing fans is that he’s being matched against faded guys and weaker secondary champions to make easy money on  Showtime.

They’re not getting in the way of Tank and Mayweather Promotions to insist that he fght better opposition than what he’s been doing. Russell Jr. (31-1-1, 18 KOs says he’d like to fight Tank, but that doesn’t seem likely. He might be too risky.

“I definitely wanted Gervonta ‘Tank’ Davis. I still want him,” said Gary Russell Jr. to Fighthub. “I wanted to break my foot off into Leo [Santa Cruz]. Leo ran away from me for the longest.

“He was in my weight division. We could have made it happen. Everybody that was in 126 when they was fighting whoever.

“Whether it was Shakur Stevenson, whether it was Josh Warrington, and whether it was whoever they were at the time when they had the opportunity to compete against me, none of those guys was in a rush to get in the ring with me.

“I thought it was a very strategic fight,” said Russell Jr. when asked what his thoughts are about Gervonta’s recent fight against former WBA ‘regular light welterweight champion Mario Barrios on June 26th.

“Floyd [Mayweather Jr.] had to come in his corner and tell him, ‘You’re down on the scorecards. You got to get this guy out of here to win this fight.’

“Even when he [Gervonta] was competing against Leo. He was losing that fight. He was down on the scorecards in all of them rounds until he hit Leo,” said Russell Jr. about Tank needing to score a knockout to keep from losing to Santa Cruz.

The way that Davis looked against Barrios, he would be out of his league if he challenged undisputed 140-lb champion Josh Taylor or former champion Jose Ramirez.

Tank is a good fighter, but he’s not a 140-pounders, and he’s going to have to be careful at 135. There are some guys in the lightweight division that would have a great chance of beating him.

Mayweather Promotions probably won’t bother putting Tank Davis in with someone that they’re not certain of victory. If Tank fought guys like Ryan Garcia, Josh Taylor, Devin Haney, or Teofimo Lopez, there would be a lot of risk for him.

Davis isn’t going to become a huge star if Mayweather Promotions are going to cherry-pick weak opposition his entire career.

“I think it was strategic. I know for a fact he’s not going to stay his a** up there at 140,” said Russell Jr. about Tank Davis.

“He needs to come back down here and holler at us for a little bit. They [Mayweather Promotions] are trying to trick and bamboozle the fans and the people,” said Russell Jr. when told that Tank Davis’ promoter Leonard Ellerbe, the CEO of Mayweather Promotions, said that Gervonta was moving up two weight classes to fight at 140 to challenge Mario Barrios for his WBA ‘regular’ light welterweight title. For that reason, Tank shouldn’t be criticized. ”

“Don’t try and tell me it’s this when I know it’s that. Barrios, I don’t want to disrespect him. He’s definitely a fighter. S***, I can’t really say that because he was beating Tank. He was honestly beating Tank.

“I’m pretty sure that he [Barrios] was the easier of all the other champions that are up in that weight division. Exactly, they don’t go with him,” said Russell Jr. when told that Josh Taylor is the only champion at 140, being that he’s the undisputed champ.

“They’re [Team Gervonta Davis] are going to pick someone that’s a little lighter that they think they can do. Even with it being a little lighter, they almost got the short end of the stick.

“It almost bit him in the a**. He had to go out there and pull it out. If he wouldn’t have, he would have lost that fight,” said Russell Jr. about Tank Davis needing to rally to beat Barrios.

It’s a given that Tank Davis won’t be fighting at 140 anymore unless Mayweather Promotions sees an opportunity for him to go up in weight to pick off a weak fighter or face a weak champion.

Mayweather Promotions could turn Gervonta into a big star if they were willing to take a risk with him. Keith ‘One Time’ Thurman is obvious that fight would take Tank’s career to the next level should he win.

Thurman says he’d take the fight with Tank if it were offered to him, and he’s sitting by his phone waiting for them to speak to him about the match. 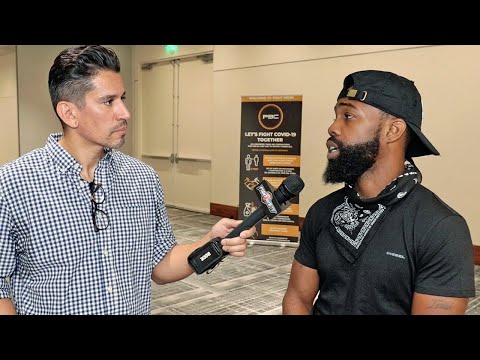