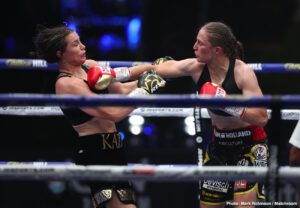 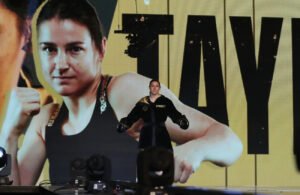 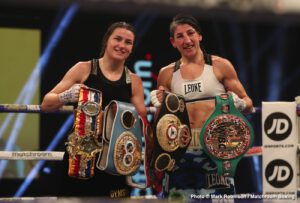 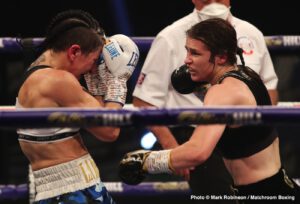 Katie Taylor completely outclassed her WBA mandatory challenger Miriam Gutierrez to retain her Undisputed Lightweight World Titles at the top of the bill on a huge night for women’s boxing.

The Irish star showed her superiority from the opening bell, flooring Spain’s Gutierrez in the fourth round as Taylor sealed a masterful unanimous decision victory with scores of 100-89, 100-90, and 99-91.… read full article “Katie Taylor dominates Miriam Gutierrez – Boxing Results”

Sky Sports has announced it is making Saturday’s triple-header of women’s World Title fights available on YouTube, Facebook and skysports.com in the UK. The card will air in the United States on DAZN, as well as in all of the other eight DAZN territories.… read full article “Watch LIVE: Katie Taylor vs. Gutierrez Live Stream on Youtube” 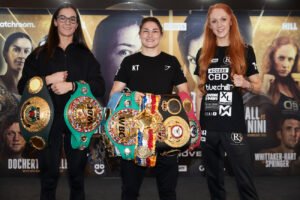 “I never get sick of looking at all the belts – it’s something I’ve worked extremely hard for.… read full article “Taylor vs. Gutierrez quotes for Saturday” 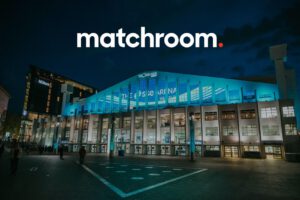 Matchroom Boxing will take over The SSE Arena, Wembley for four events in October, November and December, starting with the highly-anticipated Heavyweight showdown between pound-for-pound star Oleksandr Usyk and Derek Chisora on Saturday October 31, shown live on Sky Sports Box Office in the UK and on DAZN in all of its nine markets including the U.S.,… read full article “Matchroom Announce Residency At The SSE Arena, Wembley” 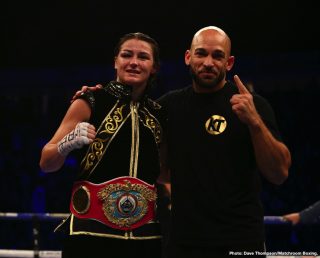 Though a good number of fight fans have possibly grown quite weary of crossover fights, showdowns between a star boxer and a star MMA fighter, there is a very good chance there would be massive interest in a female super-fight between boxer Katie Taylor and MMA warrior Cris Cyborg.… read full article “Katie Taylor Vs. Cris Cyborg Female Super-Fight Possible” 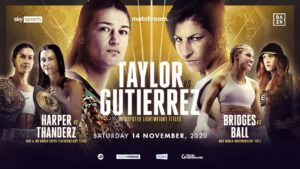 Matchroom will promote the first-ever women’s World Title triple-header on Saturday, November 14, with Katie Taylor, Terri Harper, and Rachel Ball, all starring in an historic evening of boxing shown live on Sky Sports in the UK and DAZN in the US.… read full article “Taylor, Harper and Ball star in historic tripleheader on November 14” 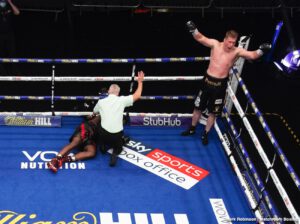