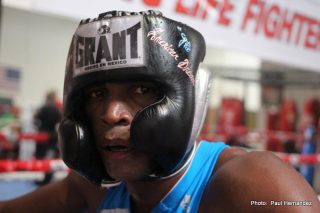 LAS VEGAS (June 30, 2014) — With less than two weeks to go until his SHOWTIME PPV® showdown with Canelo Alvarez (43-1-1, 31 KOs), WBA Super Welterweight World Champion Erislandy “The American Dream” Lara (19-1-2, 12 KOs) is looking sensational in sparring and running on all cylinders.

“My sparring partners are pushing me with numerous styles and I’m adapting to all of them comfortably,” Lara said. “I told them to come extra hard to prepare me for the pressure Canelo is going to bring. I feel great and my timing is right on.

“I know Canelo is training hard for this fight, as am I, but unfortunately for him, there is nothing he can do to surprise me. He’s going to find out on July 12 that I’m the superior fighter. His insecurities as a fighter will surface on fight night — that I can guarantee.” 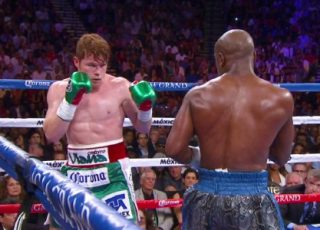 Ronnie Shields, the trainer for WBA junior middleweight champion Erislandy Lara (19-1-2, 12 KO’s), says they’ve studied Saul “Canelo” Alvarez’s fight against Floyd Mayweather Jr from last year and noticed some things that the 23-year-old Canelo did wrong in that fight. They plan on using some of the things that Mayweather did to the flat-footed Canelo to out-box him next month in their fight on July 12th at the MGM Grand, in Las Vegas, Nevada, USA.

“Lara is the master of making you adapt to his style,” Shields said to esnewsreporting.com. “Canelo is going to say ‘Ah oh, maybe I messed up; maybe I should have listened to my manager and not went to that fight. I should have gone to another fight.’ We’re going to take some of the things that Mayweather did and add it to our game plan for Canelo,” Shields said. 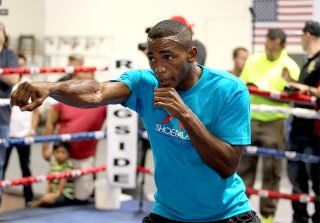 Photo: Ray Spencer – Hoganphotos/Golden Boy Promotions — Before he steps into the ring to face Mexican-superstar Canelo Alvarez, WBA Super Welterweight World Champion Erislandy “The American Dream” Lara worked out for the media and talked about his upcoming PPV main event on “Honor & Glory”.

Lara on if he was surprised that Canelo took the fight…

“Originally I thought he would never take the fight because I confronted him in person and he said, ‘No this is not how you make fights.’ Then after the fans saw that he was ducking me on Twitter, he had no choice but to be a man and take the challenge.”

The huge July 26th fight between Erislandy Lara and Saul Canelo Alvarez will be previewed this Friday, July 12th on Showtime ALL ACCESS at 9 p.m. ET/PT.

This is the first episode of the series which give fans a chance to see the two fighters before their big Showtime PPV fight on 7/26. For Canelo this is a must win if he’s to be the star of the future, because he was put in his place last year in his loss to Floyd Mayweather Jr.

After years of hype about Canelo, we saw him finally in the ring with an excellent fighter in Mayweather, and he failed badly. It wasn’t just that Canelo lost the fight, it was how he lost it. He failed to make any adjustments, and he, along his corner, looked lost. Lara is considered to be the 4th best fighter in the junior middleweight division by many boxing fans, behind Mayweather, Miguel Cotto and Canelo. 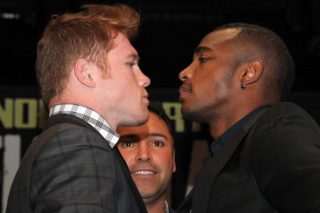 LAS VEGAS (June 11, 2014) – It is a tradition as old as the sweet science itself – fighters from minimumweight to heavyweight express themselves with their very own unique ring name. Anything goes as everything from Sugars to Executioners have made their way into the squared circle throughout boxing’s storied history, and Saturday, July 12 is no exception.

The main event of the SHOWTIME PPV showdown between Canelo Alvarez and Erislandy “The American Dream” Lara will face off not only for junior middleweight supremacy, but honor and glory at MGM Grand in Las Vegas.

SAUL “CANELO” ALVAREZ
“My nickname was given to me by my trainer Jose ‘Chepo’ Reynoso when I first started training at Reynoso’s Gym because of my red hair. First called me “Canelito” [Little Cinnamon] because I was still very young, around 12- or 13-years-old. As I grew older, it changed to ‘Canelo.’

LAS VEGAS (May 27, 2014) – The hottest fight of the summer of 2014 deserves a sizzling undercard, and Golden Boy Promotions and SHOWTIME PPV are pleased to announce the three bouts that will support the main event featuring Canelo Alvarez and Erislandy Lara on Saturday, July 12 at the MGM Grand Garden Arena in Las Vegas.