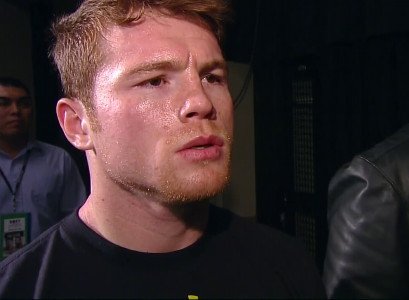 Saul “Canelo” Alvarez (43-1-1, 31 KO’s) and Erislandy Lara (19-1-2, 12 KO’s) will be fighting in the three months on Showtime pay-per-view on July 12th from the MGM Grand in Las Vegas, Nevada. Oscar De La Hoya revealed the information earlier today, and Lara’s previously scheduled May 2nd title defense against Ishe Smith has been canceled to free Lara up for the Canelo fight.

“Canelo official, July 12! We will find out what the kid’s got. This one is for my fans!!” – said Lara.
You’ve got to give Canelo a ton of credit for taking this fight, because he looked totally over-matched recently in his loss to Floyd Mayweather Jr. last September.

Lara is obviously no Mayweather, but he’s definitely got Mayweather-like skills that can be a real problem for Canelo, especially if the red-haired Mexican start comes into the fight in the mid-170s like he did in his last fight against Alfredo Angulo last March. The bigger Canelo is the easier it’ll be for Lara to clown him and beat him by a decision.

Both Canelo and Lara fought Austin Trout in the past, and Canelo barely beat him last April. The difference between a win and a loss for Canelo in that fight was the knockdown he scored in the 7th round. I know the judges were giving Canelo every round even when he wasn’t throwing punches, but Trout fought well enough to deserve a draw even with the knockdown.

Lara totally dominated Trout last December in beating him by a lopsided 12 round unanimous decision by the scores of 118-109, 117-110, and 117-110. Lara was far more impressive than Canelo was in beating Trout, and you factor that in when you calculate who will win in the Canelo-Lara fight on July 12th.

I wouldn’t be surprised if Golden Boy Promotions CEO Richard Schaefer tried to talk Canelo out of fighting Lara due to the high possibility that Lara will expose him as bad as Mayweather did.

Read: WSB: USA 2-3 Cuba: Domadores are the last to join the semis
Read: Klitschko: Leapai is an underdog but he can bite
Follow @boxingnews24