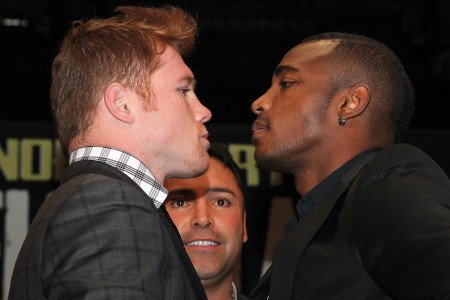 “These fans motivate me to keep training and to get up in the morning and run.

“I want people to say that I came up from Mexico to the boxing world. It’s a big responsibility for me because in Mexico there are a lot of legends. But our legends cannot be compared to any others. No two Mexican legends are alike.

“Lara has talked a lot, [to the fans] you guys asked for the fight, and here it is. What you guys ask from me, I will give you.

“A lot have asked me, ‘Why did you take this fight?’ I say ‘Why not? I will fight anyone. Style doesn’t matter.’

“The reality is that a year ago the fans didn’t really know Lara. Nobody really knew him. But he’s been talking so much that now it’s built up and the fans asked for it so I wanted to give them what they wanted.

“For the Mexican fans, we have a surprise for you July 12.

“I came from Cuba where I fought the best. I earned this in the ring, fighting the best in the division, not on a Mexican street corner.

“I’ve always done my job against the best fighters in the division. I’ve faced a lot of hard punchers so I’m not worried about his power.

“Canelo knows, just like everyone in the division knows. No one wants to fight me because I’m dangerous and I beat everybody. He took this fight because of the pressure I put on him.

“I’ve been in this sport since I was 12-years-old. It’s all I’ve done my whole life. I am a fighter. I’m not distracted in the ring or in training. My main focus is being well prepared and winning this fight.

“A win would be huge for Cubans and Cuban-Americans. That’s why I changed my name to ‘The American Dream.’ I came to this country and I was allowed the privilege to better my life. I go into that ring to win.

“I feel I’m one of the top three-pound-for-pound fighters. Some give me that credit but some won’t. My job is to keep winning and doing what I’m doing. The proof is in who I’ve fought and beaten.”

“We feel that this event will be one to remember, because you have two fighters who are equally matched.

“We haven’t seen this type of event for a while. This reminds me of Julio Cesar Chavez vs. Pernell Whitaker, a ‘who is going to win?’ fight.

“As you know Golden Boy Promotions has the reputation for putting on the best cards ever and we will be putting the biggest names on the card July 12. It’s a treat for the fans that pay their hard-earned money to watch four good fights.

“Lara is a very, very dangerous opponent, there’s no way to sugar coat it. On July 12 they will try to prove who is the best on that night.

“These fighters are fighting for a lot of honor and glory. It will really be an honor to beat the other guy, because both guys have the ability to be great. It is an honor to be in the ring with another great fighter.

“Inside that squared circle, there’s no nationality. There are two fighters stepping in the ring who just want to win and put on a great fight. When they step in the ring, they are fighting for honor and glory for the whole world.”

“Lara keeps talking about the Cuban school of boxing but in Mexico we have universities of boxing.”

“This fight had to happen. There was no way either guy could go, but to fight each other. Canelo keeps showing that he is one of the best fighters out there by continuing to fight the best.

“Both fighters are great fighters and the fans are going to be the true winners of the fight. These guys have styles like thunder and when the thunder hits, it’s going to be a knockout.”

“On July 12 you will see the best two fighters at 154 pounds and there will only be one winner and it will be ‘The American Dream,’ Erislandy Lara.”

“Over the last year we have seen Canelo go from an up-and-coming young star to one of the biggest names in the sport.

“There’s no question he is already boxing’s brightest young star. But he’s not interested in stardom. What is sometimes overlooked in all of this stardom and celebrity and ticket sales is that like many of the great Mexican fighters that came before him, he wants to fight the best fighters in his division.

“Again he is choosing to fight someone that no one wants to fight. Lara is one of the most talented and skilled boxers in the sport. This fight represents everything that is right about boxing; the best fighting the best. Number one versus number two in the division.