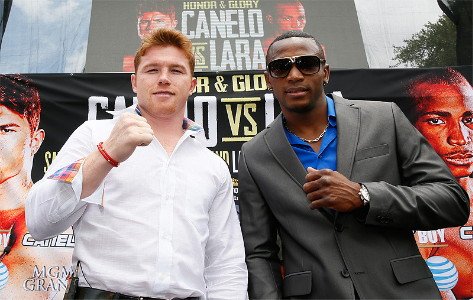 “It truly is an honor to be here amongst all of you. Whenever I am doing anything in boxing, San Antonio is on my list because you guys treat me like family.

“I love it here and I’d love to fight in San Antonio later this year. Thank you very much.”

“There’s nothing more to talk about, the fight is made. On July 12 we’re going to take Canelo to Cuban school.”

News:
Alexander Povetkin Recovering From Covid, Back In “Light Training”

“Canelo has a gift for everybody July 12 and it’s going to be a victory against Lara.”

“July 12 we’re going to be ready like always and give a great fight.

“Like my dad said we have always admired the Cuban style of fighting, but in Mexico we also have great fighters.

“On July 12 all we’re going to do is give this guy here a beating.”

“I want to thank Oscar for coming back to the sport and building the company that’s the biggest company in boxing and they put on the best fights.

“We’re here because two of the best fighters in the world decided to fight each other. This is what boxing is all about. Boxing needs this.

“It takes time for the best fighters to fight each other, but when they do, there’s a lot of fireworks.”

“Right now you are looking at the best 154-pounders in the division, Lara and Canelo. The fact that Canelo wanted this fight shows you that he wants to be great and he wants to fight the best in order to be known as great.

“I commend Canelo for choosing this opponent. He’s dangerous and he’s a real opponent. There’s a lot of similarities between these two fighters and come July 12 we’ll see who is the best. I think this is going to be a terrific fight.

“In Cuba you have incredibly talented fighters, Erislandy Lara is no exception.”

“We are putting on the biggest events in boxing with the most marquee names in the sport, and they are fighting tough fights. That credit has to go to Oscar De La Hoya and everybody at Golden Boy Promotions.

“At just 23-years-old Canelo Alvarez is making a name for himself as fearless and ready to fight anybody.

“For Erislandy Lara, he’s had an incredible journey, from leaving his home country of Cuba to fighting professionally to making a name for himself and becoming one of the most difficult fighters at 154 pounds and one of the most feared guys in boxing overall.

“This fight is the quintessential fight for Showtime, with one of the biggest names in the division fighting one of the toughest fights of his life and that’s what we’re all about.”