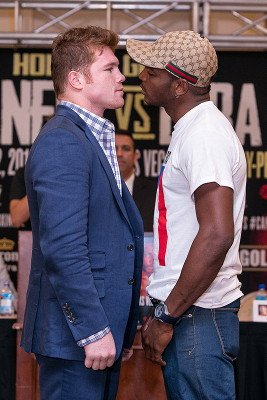 “Thank you all. Yesterday we arrived and the reception we got showed the quality of people you are, and I am very pleased.

“I’ve heard a lot about Puerto Rico. I’ve always wanted to come; that’s why I decided that we make a stop here during the press tour.

“I’m always working, I’m always training and this was the chance to come here. I hope to have the opportunity to come here on vacations.

“Puerto Rico is much more beautiful than I thought. I want to thank everyone for their support and I just want to say that I am always 100 percent prepared.

“He [Lara] is a great fighter, a great boxer, a tough fighter, but I have fought against all styles.

“I have the experience and on July 12 may the best man win.”

“On July 12, the fans are going to see Mexico vs. Cuba and history is going to repeat itself.

“Just like when the underdog at the time, Tito Trinidad defeated Oscar De La Hoya.

“Thanks to all my Puerto Rican brothers. Many will wonder why I have this t-shirt with the flag of Puerto Rico.

“I want to say that the flag of Puerto Rico is the same as Cuban, only change the colors around, but that does not mean anything.

“On July 12 you will see Erislandy Lara giving the best of himself and I want to tell you that Erislandy Lara will beat Canelo Alvarez just like [Felix] Trinidad beat Oscar de la Hoya.

“I’m just waiting and training hard until July 12 which is nearby.”

“Lara has surrounds himself with great people and he is focused and always trains hard for his fights.

“He does exactly what a champion should do. This is going to be an exciting, competitive fight.

“Lara is one of the best fighters to ever come out of Cuba and he has an incredible amateur background with 250 fights.

“He earned his WBA championship title when he fought 11 hard rounds with Angulo.

“Canelo won the WBC Junior Middleweight title in 2011 and defended it 11 times.

“He has victories over Austin Trout, then he beat Angulo and he was in the mega-event when he fought against Floyd Mayweather last September.

“He’s a fighter that always gives the fans what they want.

“This fight on July 12 is definitely one of the most difficult challenges that Canelo will face at 154 pounds.

“He is facing a tough opponent in Lara.”

“[Juan Manuel] Lopez vs. [Francisco] Vargas is going to be an exciting fight.”

“This is the classic Mexico vs. Puerto Rico.

“It’s going to be a tough fight, we are both former Olympians, but I’m going to train very hard and stop JuanMa’s re-emergence as a champion.

“He [Lopez] is a tough fighter, he is very experienced.

“It’s complicated because he is a southpaw, but we have to fight with people like him to take it to the next step and get a title fight.

“We will make a tactic (startegy) for the fight. We know he gets tired, we know that the fight can end before what is agreed.

“We will be very careful because we know he hits hard.”

“I want to thank God for granting me the opportunity of having a championship fight.

“I’ve only seen Francisco’s Olympic videos and he’s not someone to overlook.

“He’s strong, he’s tough and stands up in front of you and fights his heart out.

“I came to Puerto Rico for the first time 15 years ago, and I have to confess, this island stole my heart.

“We’ll see if he [Lara] can fight like he talks.

“Hopefully July 12 he comes to fight, so the fans are happy and so it can be a great night because if he shows up to fight, Canelo will knock him out for sure.”

“Mark my words, we are going to win by way of knockout.

“It will be a very interesting fight. Both are very good boxers and technicians who are always well trained and disciplined.

“This is a fight that you cannot miss and I’m sure we will win by knockout.”

“In that fight [against Alfredo Angulo] we made a couple of mistakes and it cost us.

“In that fight, the most important thing I told him was, he can’t be on the ropes. He’s the fighter and he knows what he can do.

“It didn’t work and I told him again, stay off the ropes. Then he beat him bad.

“Angulo was just walking around, all defensive, that was not the Angulo everybody knows.

“So he [Canelo] can’t say he really fought a very good Angulo because he didn’t.”