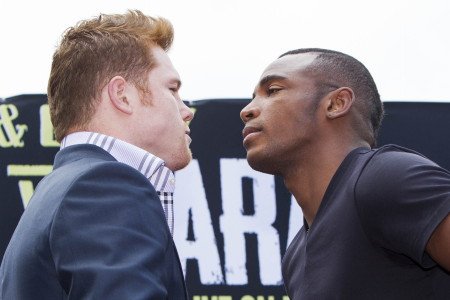 Hundreds of fans and media members turned out for the Golden Boy Promotions open-to-the-public press conference that also was streamed live in High Definition across multiple SHOWTIME platforms, including via satellite feed, YouTube, Ustream and sports.sho.com/live.

Popular Mexican superstar Canelo, of Guadalajara, Jalisco, Mexico, will bring a record of 43-1-1 with 31 knockouts into the 12-round match-up. Former Cuban national amateur standout and slick southpaw, Lara, holds a record of 19-1-2, with 12 knockouts. The event will be produced and distributed live by SHOWTIME PPV.

“It is amazing the attention this fight is receiving,” said Golden Boy President Oscar De La Hoya, who emceed the proceedings. “Why? This is a fight that can possibly be the Fight of the Year. You have Lara the champion who nobody wants to fight because he’s dangerous.

“Golden Boy Promotions has a reputation of putting together great cards from top to bottom with great fights and this is going to be no exception.”

Tickets also are available for purchase at www.mgmgrand.com or www.ticketmaster.com.

“I took this fight because the fans wanted it, and after I kept reading and hearing interviews with Lara about how badly he wanted this fight,” Canelo said. “He said some bad things about me on Twitter and social media. I’m a Mexican, and I know all the tricks. You can’t say the kinds of things he said. So I’m going to please the fans and myself by fighting him.

“I don’t think I took what he said personally, or that he got under my skin, but he likes to talk. He can say

anything that he wants in the ring to me on July 12.

“I have a lot of respect for Cuban fighters. I grew up watching fights of Jose “Mantequilla” Napoles. There are lots of great fighters from Cuba. Lara’s a good fighter. But we’ll see who’s best when we fight.”

Said Lara, “I’ve never tried this hard to get a fight, and actually get it like I did for this one. I went to

extreme measures, doing things I’ve never done before. I’m a pretty laid-back guy, but I did everything I

could to challenge him and make people, the fans and the media demand that he fight me.

“It’s all because I want to prove that I am the best 154-pound fighter in the world.

“I think he is having problems with weight. That’s why he wanted that extra one pound and why we’re not

fighting for my title.

“I’m not sure what kind of fight this will be. It could be a war, and I could stand toe-to-toe like I did against Alfredo Angulo, or I can box. It depends how I decide to fight him in the ring.

“This is the fight, my fight. I win this, I’ve earned the right to fight Floyd Mayweather next.”

The tour continues on tomorrow in San Antonio, Thursday in New York City and Friday in San Juan, Puerto Rico.

Below are more quotes from Canelo, Lara and Tuesday’s participants:

“I want to thank the fans for all of their support. They are the best for me. All of the media, thank you. All the support is what makes this possible.

“I wanted to give the fans this fight, because this is what they asked for. I was offended on Twitter and social media because people said a lot of things about me. But that doesn’t matter. I’m here to prove who I am, and I’m going to win July 12.

“This fight is only for my honor and glory to bring to the Mexican people.”

“I don’t really have much to say; everything is done. On July 12,we are going to let our fists do the talking. There’s nothing more to say. We will see you there July 12.”

“On behalf of team Canelo, thank you all for being here. This is a fight that the fans wanted and we wanted to give it to them. On July 12, you will see what Canelo is made of.”

“On July 12, it’s going to be a great battle. Lara is a great fighter, one of the best. But on July 12, we’ll see who is going to take who to school and where the real fighters come from.”

“Both of these fighters deserve to be on this stage. It’s going to be a great fight. This is why all the fans come out. They come out to see great fights.

“Both of these guys are two of the best at 154 pounds in the world. There can only be one winner and that’s going to be Lara. The reason is because he’s the best fighter, simple as that. He has been avoided by every top fighter in the world, including Floyd Mayweather. Canelo is a very good fighter. We can’t take anything away from him. But Lara is one step ahead and we are going to prove that on July 12.

“The fans should come out. Get your tickets. Get your pay-per-view. It’s going to be a great, great night. We are sure the undercard will be great as always, Golden Boy puts on the best shows – simple as that.

“People are going to be talking about this fight for a long time. Both of these guys have two common opponents – Austin Trout and Angulo. Canelo slipped by Trout, and Lara destroyed him. They both have stopped Angulo. Both guys can punch, both buys work really hard.

“Get your popcorn. It’s going to be a great night. On July 12, Erislandy Lara will walk out as the victor.”

“Team Lara is an excellent team. A professional team with a great trainer, a great manager. He has good people around him. All Lara has to do is focus and train for this fight. That’s what a champion should do and that’s exactly what he does.

“Lara had a controversial loss against the great Paul Williams. He is the WBA Champion after defeating Angulo in 11 rounds. He has the pedigree; as an amateur in Cuba he had more than 250 amateur fights. He’s one of the best fighters to ever come out of Cuba.

“Canelo is one of the most compelling fighters today. At only 23-years-old he has had a professional career since 2005. He has won the WBC Junior Middleweight title in 2011 and defended it 11 times. He has victories over Austin Trout. He beat Angulo and he was in the mega-event last Sept. 13 against Floyd Mayweather.. Now, he is back, giving the fans what they want. This is most difficult challenge at 154 pounds for Canelo. To please his fans, he is facing the toughest guy in the division, Lara.”

“SHOWTIME is on tap tonight to possibly receive eight Emmy awards for our work from last year; something we’re very proud of. That is a record for us in nominations.

“In two years, SHOWTIME Sports has risen in prominence on the back of our boxing franchise,which is now known for televising the biggest events in the sport of any television network, is Canelo Alvarez. Credit goes to Erislandy Lara for challenging for this fight against Canelo, and credit to Canelo Alvarez for taking this fight against one of the most feared men in boxing and certainly the most avoided guy in this division.

“This matchup is the type of fight that SHOWTIME has become known for. It’s the biggest names in the sport, the most compelling matchups and the toughest fights to date on the grandest scale.

“Also, the replay of Maywaether vs. Maidana will air this Saturday at 9:30 p.m. ET/PT

on SHOWTIME as part of our network’s Free Preview Weekend.”