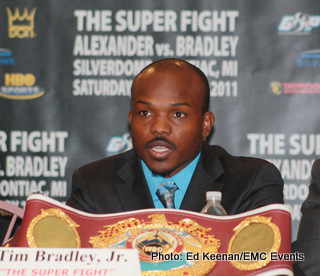 Gary Shaw – This fight is called the Super Fight because they are the two best fighters in the world at 140 lbs…bar none. But I am going to tell you, and Devon, why my fighter will win. My fighter has beaten better fighters, has gone deeper into fights and won a title overseas. Timothy Bradley works harder than any fighter I have worked with in my whole career.

Kevin Cunningham – This is the greatest division in boxing. I hear from Gary Shaw that Tim Bradley has beat all these guys, these great champions…who are they? Gary Shaw was right about one thing…right now Timothy Bradley is No. 1 and Devon is No. 2. But there is a problem with that because Devon doesn’t like to be No. 2 and on January 29 he will change that..

Joel Diaz – I want to thank Timothy Bradley and his father for giving me an opportunity one day and believing in me. Timothy Bradley is a great fighter and a workaholic. And on January 29 we will see who the best in the world is at 140 lbs. It will be a great night. A fight for the ages.

One of the most anticipated fights in boxing — and the biggest bout of a young 2011 — will take place when undefeated world champions DEVON ALEXANDER “The Great” and TIMOTHY “Desert Storm” BRADLEY duke it out at the 140-pound weight limit on Saturday, January 29 at the Silverdome in Pontiac, Mich.

Boxing fans have been waiting for years to see these two young world champions collide. The St. Louis phenom Alexander (21-0, 13 KOs), who will put his unblemished record and World Boxing Council (WBC) super lightweight championship at risk while Bradley (26-0, 11 KOs), from Palm Springs, Calif., enters the bout with a similarly perfect record and his World Boxing Organization (WBO) junior welterweight crown on the line.

Tickets, priced from $25-$400, will go on sale This Friday! December 10, and can be purchased at the Silverdome box office, by calling (248) 338-2500 or online at www.silverdometickets.com. Promoted by Gary Shaw Productions, Don King Productions, and Thompson Boxing Promotions, Alexander vs. Bradley will be televised live on HBO World Championship Boxing, beginning at 10 p.m. ET / 7 p.m. PT.