Mack said to AFP “He’s [Froch] not going to knock me out so the pressure is on him to do that, and when I’m still standing there after the 6thj round, when people think I’m going to tire, what’s he going to do? I don’t fade and he can’t beat me.”

Froch is probably going to keep trying to KO Mack for as long as this fight lasts because that’s what Froch typically does unless he’s facing a guy that is hitting him back with hard power shots like in his fights with Arthur Abraham and Glen Johnson. Froch didn’t seem interested in fighting toe-to-toe with Abraham and Johnson. Instead, Froch chose to use his long reach to jab and land single shots against those two shorter fighters.

Froch has a slight height advantage over the 6’0″ Mack, but the reach of the two fighters are identical. This means that Froch won’t be able to bombard the long-armed Mack from the outside like he could against Johnson and Abraham.

It’s going to be interesting to see how Froch does against Mack if the American fighter doesn’t fade in this fight. Mack can really punch and is at least on par with Lucian Bute, Abraham and Johnson in the power department. It might be an uncomfortable experience for Froch if he can’t take Mack out tonight and can’t escape from his long reach. 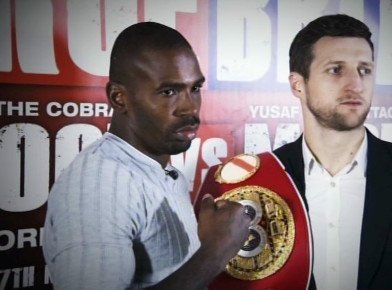 Read: Andre Ward not interested in Froch’s fight with Mack
Read: Broner: I’m going to show off more of my skills against DeMarco
Follow @boxingnews24