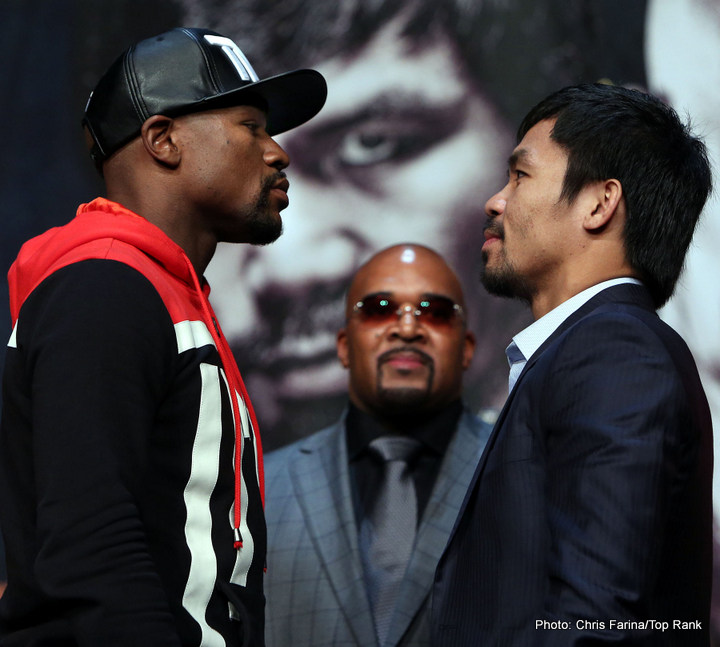 This will be my last article prior to the big day, the big occasion, the event that is being billed and extolled by many as the greatest event in boxing history. I do not necessarily share those sentiments, because, for me, Ali – Frasier 1, Ali – Foreman, Sugar Ray Leonard – Tommy Hearns 1, and Sugar Ray Leonard – Marvin Hagler were events of as great or greater boxing significance. All of the fighters involved in those events had accomplishments greater than Manny Pacquiao, and the legend of some of them probably equaled or exceeded the accomplishments of Floyd Mayweather Jr. Of course Floyd would disagree with this, and he has every right to be. Because his accomplishments are significant, and one can legitimately argue that he is indeed the The Best Ever (TBE).

Let me digress a little by arguing that it is somewhat childish for people of sound mind and discretion to claim one boxer was better than another when they competed in divisions that were so disparately distant in terms of their weight, that it preclude them ever being able to fight each other, even if they existed within the same chronological time line. That is equivalent to arguing that Usain Bolt, a sprinter, was a better athlete than Ethiopian Marathoners Abebe Bikila and Degaga (“Mamo”) Wolde, or vice versa. One cannot accurately extrapolate the pugilistic skills and abilities of heavyweight boxers to what they would be if they fought at lightweights, welterweights or middleweights, and vice versa. It is an argument that is as nebulous as one seeking to determine whether John Wayne was faster on the draw than Audie Murphy, simply on the basis of their movie roles. I just had to get that out.

I have tried, in my previous articles, to provide a counter to the analytical template that is being followed by the establishment media, as well as by pundits and analyst whose articles appear in this and other web based boxing magazines. In so doing I have taken up the challenge to provide a social and cultural perspective that is drowned out by the “Manny Walks on Water” expositions that have often, in fact mostly, descend into depths of idolatry, hypocrisy and even what sometimes appear to be eerily proximate to the kind of racial stereotyping that is reminiscent of a time in the past. The Floyd is Dark Vader, is the devil, and Manny is the “Jesus Christ come to save boxing from him praxis have become so awfully nauseating that at times I am compelled to change channels or just turn off my set to keep from puking. And let me provide one example of this.

At the recent Press Conference Bob Arum attempted to enhance Manny’s accomplishments by providing a historical perspective of his heritage. That he came from a people who had suffered so much hardships in their history that Manny being where he was, achieving what he had, represented something that was unique and exceptional. Not so. The Peterson brothers and even Victor Ortiz’s childhood experiences parallels Manny, as do that of many Mexican and American Boxers. And if we are getting into heritages, Floyd Mayweather Jr. comes from one where his ancestors were forcibly trekked across the Atlantic in the bowels of ships, categorized as less than human, had their wives husbands and kids sold away from them, and look where he is today. Yes, the American dream of course, and no less exceptional than that accorded to Manny. Even further, and of major importance, is that Floyd’s wealth comes directly from what he was able to produce from his skills, his production and work in the ring, his place of employment if you will, and not from endorsements that Manny and most other Athletes enjoy. And he still manages to be the highest earning athlete two years running.

I had made a slight comparison in an earlier article that juxtaposition how Floyd is being treated today, with how Mohammed Ali was treated after he objected to the draft based on his religion. But after further review I believe that the treatment he is subjected to is more analogous with that which the first black heavyweight Champion, Jack Johnson experienced in his boxing career. The independence, assertiveness or arrogance, depending on who was doing the categorizing, control over his physical assets, and don’t give a damn what they say attitude of Floyd, is in many ways comparable with what is the recorded profile of Jack Johnson. Describing Johnson under the “Caption REBEL OF THE PROGRESSIVE ERA”, Dr. Gerald Early writes, “Johnson did not seem to care what whites thought of him, and this bothered most whites a great deal. He was not humble or diffident with whites. He gloated about his victories and often taunted his opponents in the ring. (This behavior was not unique to him as a champion boxer”. “Many boxers, notably John L. Sullivan, acted this way. It was unique for a black public figure”.) Without a shadow of doubt, one can replace Jack Johnson’s name with Floyd Mayweather’s, and one would not to have to erase a single word to make that description applicable to this latter day replica, particularly over the past 12 years or thereabouts. He is cocky, (thus arrogant), flaunts his wealth, brags about his skills and ability, and obviously do not think much of the boxing press and most of its analyst and pundits. And why should he. It’s not as if he is given his due by them.

I hate political correctness, so when in my examinations I eliminate those things that are incontestable, I do not hesitate in going to the most obvious conclusion. In this context, what can one deduce as the motive why anyone would subscribe to and endorse the argument by Manny and his coach that Floyd is bad for boxing? That boxing need to be cleansed of him. He has been the one dominating American constant in Boxing over the past decade, as Venus and Serena Williams have been that American dominating constant in Tennis. His presence in Boxing has generated more revenue than any other fighter. He is part of a sport genre where angels do not exist, only pretenders who are allowed to ego masturbate their “Godliness” and “cleanliness”.

His social flaws and mistakes, one of which earned him a prison term, is emphasized more than those of any other sport personality or Athlete. We see the incident of domestic violence that earned him a prison term now being argued as the reason why some want nothing to do with him, do not like him, cannot stand him. And coming mostly from a media assembly where no such repugnance is exhibited for one of their own who plead guilty to a violent interaction with a woman, but only after another woman reported a like interaction with him. Of course he was spared a prison term in plea bargaining, and once again took his place as a commentator in sports booths, supremely and absolutely confident that his criminal faux pas will never follow him as obtains in the case of Floyd Mayweather Jr.

From the beloved Arturo Gatti to Angel Manfredy, from Iron Mike Tyson to Oscar De La Hoya, numerous boxers have crossed that ethical line of demarcation in their interactions with women. Mike went to prison, and Oscar settled his issue after a civil suit was filed against him. The difference between all of these and Floyd Mayweather Jr. is that he is the only one whose sins seem to matter. No, this is not excusing his behaviors whatever they were and represent. This is a matter of arguing that an odious double standard exist in the sport, and most importantly, how it has affected the coverage of an upcoming fight between someone who is an American, and someone who is not.

So as we take in the narratives, the profiling, the depictions and the platitudes, Manny has become the current John L Sullivan charged with the task of recapturing the prestige of boxing from the latter day Jack Johnson. Manny has become the Daniel come to Judgement of Floyd, as enthused by Shylock in Shakespeare’s Merchant of Venice, as he poured accolades on the Daniel of his era over his apparent endorsement of his (Shylocks’) legal right to “a pound of flesh from the nearest part of Antonio’s heart”. But like Shylock was disappointed over the final outcome of the case, so too, I believe, will those who today have assumed his character as a collective, in their quest for the proverbial pound of flesh from the nearest part of Floyd Mayweather’s heart. And when the dust has settled, and Floyd Mayweather Jr. walks away with his 0 intact, undisturbed, which of course, I hasten to admit, is not by any means a foregone conclusion, the demand for over the counter anti acidic medication will experience spikes never before seen in the US.