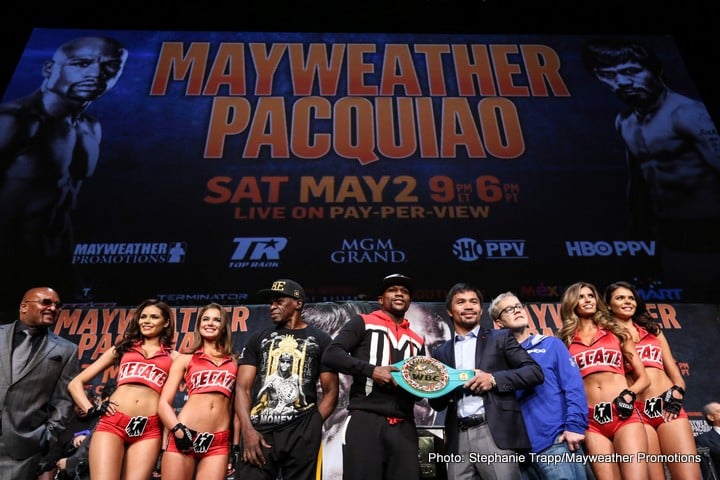 As the hours draw closer to the most eagerly anticipated fight of most boxing fan’s lives, the experience couldn’t be more surreal. At the stark risk of disappearing up my own purist arse – the broadcaster hype that follows fights of this magnitude is comparable to people offering you free canapés after you just ate a your favourite home cooked meal.

It’s nice to see others enjoying it, but you’re good. Thanks though.

Much of what is being offered out through glossy lenses is knowledge boxing fans already have. We know Floyd has not lost since he was robbed in the ‘96 Olympics, we know Manny hasn’t had a knockout since the 12th round catch weight bludgeoning of Miguel Cotto in ‘09, we know Floyd had more trouble than honest folk anticipated in two fights against Marcos Madiana last year, we know Manny’s journey from squalor to riches, we know arguably more than any other sound bite – that this fight has been 7 long years in the making.

The questions on the minds of hundreds of thousands of boxing fans around the world are those we cannot know the answers to with a Google search & relate primarily to what we will see inside the ring centred in the MGM Grand Garden Arena, Las Vegas on May 2nd 2015.

677, 477, 505, 426, 326 Punches thrown in each of his last 12 round encounters, compounded with the natural aging process, would suggest so. Of course, there are nuances. Fighters of lower calibre than Floyd know to employ movement & counter punching vs. a come forward Argentine brawlers & conversely to get on their toes and demonstrate a higher punch output against a slower Light Middleweight with celebrity born more of their cinnamon follicles than the boxing intelligence & experience that lay below.

Another popular theory to Floyd’s reduced punch output is the return of Floyd Mayweather Sr. as lead trainer, following Uncle Roger’s unfortunate diabetes onset in 2012. Noteworthy is that the theory’s biggest proponent is the man himself. A self-acclaimed defensive trainer, “Joy” pulled no punches (pun intended) in his criticism of the punishment his son took in the excitingly aggressive victories against Sugar Shane Moseley & Miguel Cotto. His Fathers mantra of longevity through reduced risk, rather than Father Time, could well be the reason for Money’s economical punch policy.

Yes, Mayweather’s work rate, punch output more specifically will be pivotal to the fight. Camp Pacquiao have made no secret (except occasionally in front of American Network journalists with a PPV selling agenda) that their strategy is to use a pre-ordained footwork pattern, maintain a high punch output, win the rounds, outwork & ultimately outpoint the best defensive boxer of a generation. A bold plan, almost laughable, until one asks themselves for viable alternatives.

The Roach strategy in addition to too close for comfort judges’ decisions against Mayweather (Splits against De La Hoya, Canelo) we can safely assume If Floyd’s punch output dips below an average 35–40 punches a round, this will be surely due to nature & not strategy on Mayweather’s part.

WILL THE FIGHT BE COMPETITVE?

This is dependant to multiple factors. If Floyd is able to throw 550+ punches, if Floyd’s hands (which Bob Ware will wrap to a skill level that has been enough to demote the decade long serving Rafael Garcia to cut man only for the 3rd fight in succession), if reports of a less than perfect Camp Pacquiao distracted with spies, fandom, tax & theology are true, if reports of a sparkling Camp Mayweather, with its protagonist more aggressive than ever maybe rejuvenated by the unparalleled financial rewards that will follow on May 3rd are true, if Manny Pacquiao is not able to box to a carefully laid plan – a critical factor, the answer is likely to be a crushing one for those of us for whom the “who wins” question reached an arc of excitement in 2009 & became redundant in 2013.

If the answer to all, or even most of the above questions is yes, the rational outcome of May 2nd is comprehensive Floyd Mayweather victory.

9 rounds to 3, with a knock down or two in the middle rounds

We live in hope that there is more to it.

CAN MANNY PACQUIAO BOX TO A PLAN?

Freddie Roach’s logic is simple. In order to make the fight competitive, to make the case in the 3 American judge’s minds, to make a potential September 12th rematch viable even in defeat & secure the financial future of his charge and the esteem of millions of fans around the globe, Manny Pacquiao must box to a plan.

Whilst his improvisational skill, freakish physiology, appetite for risk & blurring two fisted combinations may have made Manny Pacquiao the most exciting fighter on the planet for a considerable period, these are memories not realities. That Manny Pacquiao, like Elvis, has left the building & will not be returning to Las Vegas on May 2nd 2015 or any other time for that matter.

Instead, this Pac Man will need to adhere to a footwork schedule comparable to that of an Olympic gymnast; disciplined. One wrong move could spell disaster & tarnish a legacy. If we cast our minds to the Erik Morales rematch, the Ricky Hatton blow out, Tim Bradley rematch, we can think of specific adjustments Manny was able to sustain to receive a desired outcome.

HYPOTHETICALLY, WHAT DOES MANNY NEED TO DO TO WIN THE FIGHT?

We know from the Zab Judah & Robert Guerrero – Floyd chooses to adopt the high forearm guard for longer periods to offset the southpaw power shot. Manny must utilise his breeze block-esque calf muscles to land in and out of range, maintain a high output of jabs & right hooks to Mayweather’s body to get rounds in the bag – if you’re still reading, the chances are you’re well versed with the body shot / investment analogy. If the “down the pipe” straight left presents itself, Manny needs to restrain himself from taking the bait too often in the early rounds.

In this hypothetical scenario, Manny will need to disappoint the international bourgeoisie in attendance and standoff Floyd in the hope of inducing anxiety from the ever calm Mayweather. If Floyd is presented the opportunity to land the counter right hand on an oncoming Pac Man, even half as many times as Chris Algieri was in Macau – this is where the dream of rewriting history ends.

History shows a mixed picture of successful & failed attempts to “out box the boxer” in super fights. With the counter puncher Mayweather being the bigger man, and his charge having the ability to release high speed flurries in exchanges, Freddie Roach is hardly spoilt for choice of strategies. Whilst unpopular while it lasts, Manny will need to land his shots and move constantly.

Be it myth, legend or reality – it is said on too many occasions to be ignored: The championship rounds count & American judges respect aggression. If Manny can go into the last 4 stanzas ahead by 2-3 rounds, Floyd will be in the uncomfortable position of needing to press the action, be the aggressor.

We know one of the few advantages the Filipino has in this fight is his hand speed & power in direct exchange scenarios is superior & therefore this would be the time to let the vaunted south paw left hand go in order to come out of exchanges the victor and discourage a chasing Money Man.

A topic largely ignored in this piece but well covered in media of all description is Floyd Mayweather is a candidate for the title of “The Best Ever”. If we were to play the word association game with some other greats of our sport it would arguably look like this, Ali: Charisma, Robinson: Grace, Leonard: Resilience.

The one word (this scribe would argue only word) to coin a Mayweather candidacy for the title is: Intelligence. When the bell rings, Floyd Mayweather’s algorithms will commence, the calculations will be performed at frightening speed, his aptitude to read body language & resulting ability to adjust his movements will undoubtedly be influenced by the knowledge he will be taking food out of his four children’s mouths by dominating Manny Pacquiao in a boxing match.

After 19 years of hard work & dedication as a professional athlete, he will be faced with the paradox of losing millions of dollars with every power shot he hands. These are amounts of money most of us will never see in our entire lives that Floyd will be losing with every lead left hook & counter right hand he is able to deliver to the face of the man who has been an irritant to his career for 7 of those 19 years.

Did I mention Floyd has one fight left on his contract?

See you in September.