Tyson Fury-Chisora to stream LIVE and exclusively in the U.S. on ESPN+ Saturday at 1 p.m. ET/10 a.m. PT 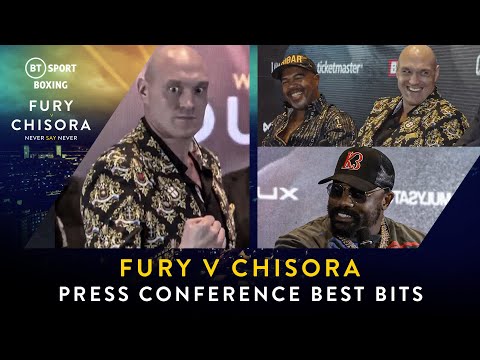 The Tyson Fury Roadshow returned to London this week, and the undefeated WBC/Lineal heavyweight world champion arrived at Thursday’s press conference in a flashy suit, and proceeded to entertain the masses in typical “Gypsy King” fashion.

Since their second meeting, Fury went on to topple Wladimir Klitschko for the heavyweight title, participate in a historic trilogy against Deontay Wilder, and pack a UK-record 94,000 fans into Wembley Stadium for his April 2022 showdown against Dillian Whyte. Chisora continued as one of Britain’s most popular attractions, most recently edging two-time world title challenger Kubrat Pulev by split decision.

At the press conference, this is what Fury, Chisora and Top Rank Chairman Bob Arum had to say.

“Whoever fights Derek Chisora is in for a fuc*ing good fight. That’s what we know. That’s what we prepared for. And he was available and ready to rock n’ roll. He stepped up to the plate, and bang, here we are. There’s going to be a throwdown for the fans right before Christmas.”

“I needed to fight this year regardless of who it was. I love fighting. I always need to fight. I wish I could fight every single month of my life. Derek’s the same. We love to fight. So, if we could fight 12 times next year, that’d be fantastic.”

“I’m doing what I love to do. I’m getting paid to do what I love. I take my career very seriously. I’m looking forward to it. I cannot wait to get out there, put on a show and entertain. Come Saturday night, there’s no friendship. There are no friends in business, and this is a business transaction. So, we’re going to go in there, punch the fuck out of each other, and then afterward we can have a nice little sandwich, a nice cup of tea, whatever he wants. Not a problem. But while we’re in there, we’re in fight mode. We’re going to put on a great show.”

“I can’t sit here and try to be more aggressive to Tyson and try to say so many bad words because the man I’m looking at right now is giving me an opportunity when nobody wanted to give me an opportunity. He called me up and he said to me, ‘I want to fight you. I want to give you a big payday.’ And I said, ‘Yes. Let’s make it happen.’ For me to sit here and try to talk shit and say so many bad things about a man who is actually giving me food on the table for my kids, I cannot.”

“All these guys in the game don’t want me to be on this stage. But, come Saturday, I can guarantee you this: friendship will be out of the door. Me and this big man are going to get it on. I’m not going to try to hold back on anything. Come Saturday, I’m going to war. I want to take what’s his and make it mine.”

“I don’t see any reason why the [Oleksandr] Uysk fight with Tyson Fury can’t be made speedily without much trouble. I know the Usyk people very well. His manager, Egis Klimas, is a really good friend of mine. He manages Lomachenko and Janibek. I’ve dealt with him a whole lot over the years. I know Oleksandr Usyk. I know he wants the fight. I talked with Tyson a little while ago, and he wants the fight. That fight will happen next unless Mr. Chisora lands his punch. Don’t discount Chisora. He is a hell of a fighter. He has a tremendous punch. I remember when he fought Usyk. He gave Uysk life or death. That fight could have gone either way. You can’t, in this business, count your chickens before they hatch.”

The supporting cast to the heavyweights is now in place and, in what is a special attraction, there is a cracking fight for the EBU and WBO International lightweight titles between the vastly experienced French champion Yvan Mendy (47-5-1, 22 KOs) and his unbeaten challenger Denys Berinchyk (16-0, 9) from Ukraine.

Frank Warren and Queensberry in association with K2 Promotions are proud to provide a platform for Berinchyk to resume his career while the devastating invasion of his homeland continues.

Berinchyk is part of Ukraine’s Class of 2012 along with Vasiliy Lomachenko and Oleksandr Usyk, winning silver at the London Olympics. Famed for his spectacular ring entrances, Berinchyk has even tried his hand at bare knuckle boxing, where he defeated former UFC Fighter Artem Lobov via TKO.

“In March I had to stop my boxing activity and joined the team of volunteers who helped our troops and people in hot points,” explained Berinchyk. “We’ve been to many places very close to the front. It was not that easy to get back to the gym after everything, but I understood that Ukrainians need all kinds of wins, so I couldn’t miss a possibility to raise the Ukrainian flag in a European ring.” 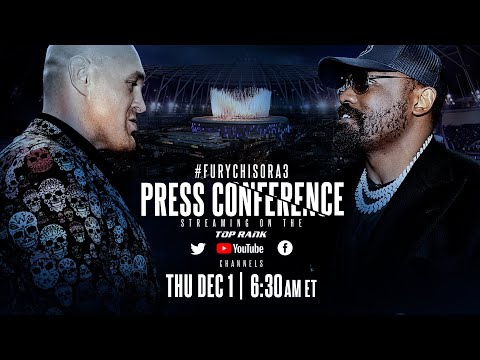 For his part, Mendy is hoping that Berinchyk is coming to make a fight of it after being frustrated by slick movers in big fights previously.

WHEN IS FURY – CHISORA? START TIME

“I have five losses on points,” said Mendy. “Three of my opponents competed in World Championship fights. Campbell, Postol and Tatli. These three boxers beat me on points, at home, and by fleeing the whole fight.”

Two of Queensberry’s Blue Chip prospects also feature on the card, with teenage prodigy Royston Barney-Smith (3-0, 1) having his fourth four rounder against the Nicaraguan Cruz Perez (3-3-1, 1), known as ‘The Pitbull’. Future light heavyweight Karol Itauma (8-0, 6) has his ninth professional fight against the Slovakian Vladimir Belujsky (12-5-1, 8) – AKA Big Bad Vlad – who is based in Ireland.

“It is fantastic, I couldn’t ask for anything more from my promoter and manager Frank,” said Barney-Smith. “He is getting me on these top shows and is also doing a fantastic job promoting me and getting my name out there.”

“I am just blessed and grateful for the opportunities I have been given,” added Itauma. “Honestly, two Tyson Fury cards in one year is a blessing and I am going to take the opportunity with both hands.” 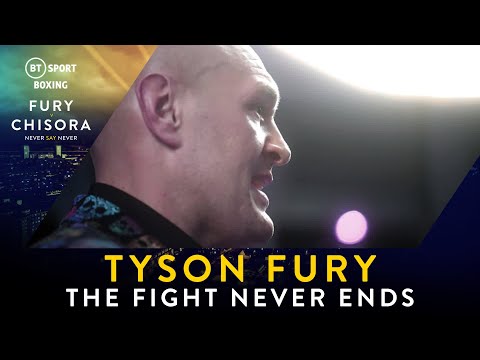