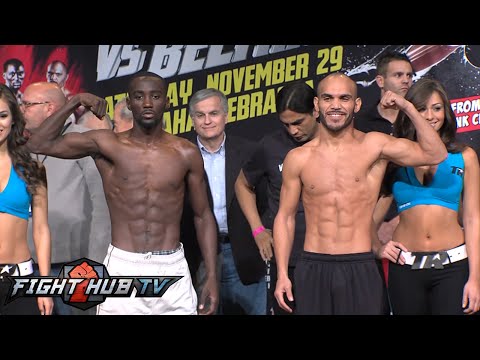 Rising star Terrence Crawford and tough-as-nails Ray Beltran meet in the ring on the man with the nickname “Bud” home turf. Still at 135 Crawford has made a name for himself with two impressive wins so far this year.

The first came over seas in Scotland when Crawford took on the 135 pound Champion Ricky Burns. Once Crawford got past some early slow moments he dominated the Scot, in the process it put him on the lightweight map.

In his first defense Crawford took less money to give his hometown of Omaha, Nebraska its first major title fight since the 1930’s (Check). His opponent was a decorated Cuban amateur Yurioirkis Gamboa, who like Terrence came in with an unblemished record intact.

In the first four rounds Terrance had issues catching up to the quick Cuban, looking as though he would be out-skilled. Crawford made progress in the 4th round and flipped the script by dropping Gamboa in the 5th. He began to land flush shots and the two continued to trade blows.

In the very round that Crawford stopped Gamboa, Yuri hurt him bad. He fought threw some scary moments to deliver a KO punch to cap his successful homecoming in style.

Beltran is a tough customer and should represent his fighter spirit making the rounds competitive. After 4-5 rounds Crawford will use his counterpunching ability and mix it with responsible aggression.

I’m calling for this matchup to be closer to the viewing audience than the 10-2 scorecards assuming Crawford doesn’t score a stoppage.

My official prediction is Terrence Crawford by entertaining Unanimous Decision.