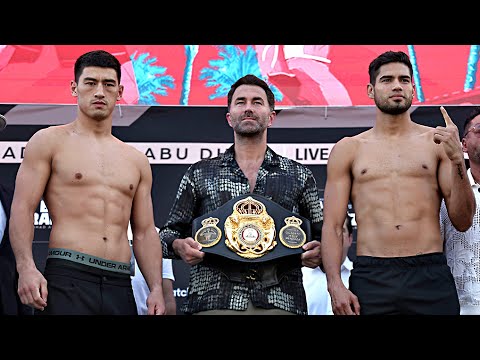 Bivol (20-0, 11 KOs) is coming off a huge upset win over Mexican pound-for-pound superstar Saul ‘Canelo’ Alvarez, at the T-Mobile Arena in Las Vegas in May, where he retained his 175lbs World Title via a unanimous decision to make it 20 wins from 20 fights.

The 31-year-old handed Alvarez only the second loss of his career, nine years on from his first at the hands of modern great Floyd Mayweather, and in doing so further cemented himself as one of the very best Light-Heavyweights on the planet.

Ramirez (44-0, 30 KOs) is a former WBO Super-Middleweight World Champion who has won all five of his fights at Light-Heavyweight inside the distance in impressive fashion since moving up in weight in 2019.

The heavy-handed Mexican southpaw emerged as the Mandatory Challenger to long-reigning champion Bivol, after a fourth-round knockout of Dominic Boesel in their May 14 title eliminator in Ontario, California.

“The fight with Zurdo has been brewing for some time, many things have been said,” said Bivol. “Now we have the chance to take care of things with our actions in the ring, and not our words outside of the ring.” 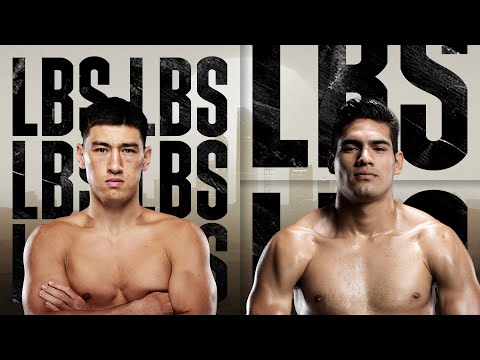 “I’m happy that the fight is finally happening despite all the challenges,” said Ramirez. “It’s been a long time coming and I look forward to a great night come November 5. I would fight Bivol anywhere – including Mars, but I know we’ll put on a great show in Abu Dhabi. I’m happy overall and very thankful to the WBA, Mr. Gilberto Mendoza and the Golden Boy family for being on this journey with me.”

“Dmitry Bivol has now secured himself with pound-for-pound status after his victory over Saul ‘Canelo’ Alvarez in May and looks to make a hugely important defence against Mandatory Challenger and former World Champion Gilberto Ramirez. The card will be stacked with World Championship fights and is set to be one of the biggest nights of boxing in 2022,” said Matchroom Sport Chairman Eddie Hearn. “I’m delighted to bring this huge World Title fight to Abu Dhabi and would like to thank Department of Culture and Tourism – Abu Dhabi for all of their help in making this world-class event become a reality. Roll on November 5 for a huge night of World Championship boxing live on DAZN.”

“With this fight finally materialising we look forward to a great night of boxing to remember and another exceptional performance by Dmitry Bivol,” said Bivol’s manager Vadim Kornilov. “We are very excited to be in Abu Dhabi, which is on the way to be the modern top sports attraction of the world.”

“Dmitry Bivol vs. Gilberto Ramirez will be a great fight, many fans have been waiting for this fight to happen and it will finally materialise,” added President of World of Boxing, Andrei Ryabinskiy.

“We are headed to Abu Dhabi and Zurdo will prove he is the best Light-Heavyweight when he fights Bivol on November 5,” said Chairman and CEO of Golden Boy Promotions Oscar De La Hoya.

“We are thrilled to host this spectacular boxing event in Abu Dhabi – partnering with reputable partner Matchroom Boxing adds yet another dimension to our exciting calendar,” said HE Saleh Mohamed Saleh Al Geziry, Director General for Tourism, at the Department of Culture and Tourism – Abu Dhabi, “Once again, the eyes of the world will be on Abu Dhabi on November 5 as we continue to strengthen our position as a top destination for world-class sport. As the host city, we are eager to share our warm Emirati hospitality to visiting fans and offer them memorable, exciting experiences to enjoy at their own pace.”

“Thank you to our brilliant partners Matchroom Boxing and Golden Boy for delivering another blockbuster fight to the platform,” said Joseph Markowski, EVP, DAZN Group. “We can’t wait to see Dmitry Bivol back in the ring after he pulled off the upset of the year against Saul ‘Canelo’ Alvarez in May, and in the unbeaten Zurdo Ramirez, he will face one of his toughest opponents yet. We have a potential classic on our hands. Watch it live and worldwide on DAZN.” 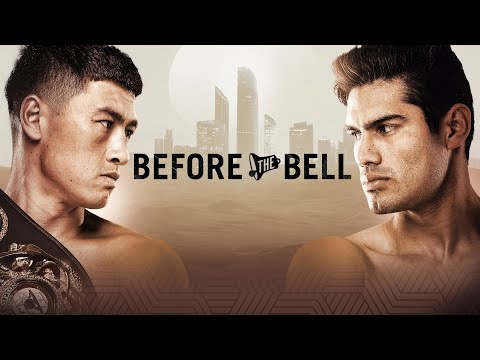 “Hello everybody. I want to say first of all, thank you to the Abu Dhabi government, the Department of Culture and Tourism for this opportunity for me to introduce boxing to Abu Dhabi. Thank you to Eddie, Gilberto Ramirez and his team – everyone who is involved in this fight. Thank you to my team.

“I really had a big dream to win this belt and I don’t want to leave it. I will fight for this and I want to keep it. I want more. I feel I have something inside of me which I need to realise so I can be happy at the end of my career.

“What about this camp? I had it in three locations, I had a great camp everywhere. The last location was Abu Dhabi. I have been here since September 27th. I feel like I had everything that I needed for training. When I thought about resting, I had everything for resting here. When I met people in the gym or the mall everyone was really happy. People have been very welcoming to me and my team. People are welcoming to every tourist here. It’s good.

“I’m looking forward to Saturday night. I believe it will be an exciting fight. Abu Dhabi will make more boxing fights and maybe boxing will be the main sport in Abu Dhabi. I hope it will be because this is my favourite sport in the world. I want to be everywhere, and people know the sport. It’s great. Thank you everyone.

“When people tell me that I have achieved everything it’s like they pour water on my fire. I try to only think about my dream, to realise my full potential. I try to be hungry and angry every time and be focused on training and my opponents. I try to think about how this Saturday night will be the hardest fight of my career. It makes me more focused on the night.”

“I really believe that I can become a two-time World Champion on Saturday. I want to say thank you to Oscar and to everyone for being here. To my team and all of the press and media – thank you. I’d like to thank Dmitry and his team for making the fight happen.

“It’s exciting for me to come from Mexico and be here in Abu Dhabi. It’s the same weather, I feel like I’m at home. I’ve been training hard for this fight and I will take the belt this Saturday that’s for sure. 44 tried, 44 fell. I hope that the people enjoy the fight because this is the type of fight that fans like to see in boxing.

“I am taking back the belt on November 5! I am very proud to not only represent Mazatlán, Sinaloa, but all of Mexico and all Latinos. I can’t wait to prove to everyone and to myself that I can do this. Bivol is a tough guy. He’s a really good challenge. But, I am going to avenge the Mexican population since he beat Canelo.

“When I heard the fight would be in Abu Dhabi, I thought ‘Wow, that’s cool – I have never been there before.’ After the press conference, I was blown away and I am even more excited to fight there.

“I expect the very best Dmitry Bivol for this fight. I expect this to be an exciting fight. It will be a war.” 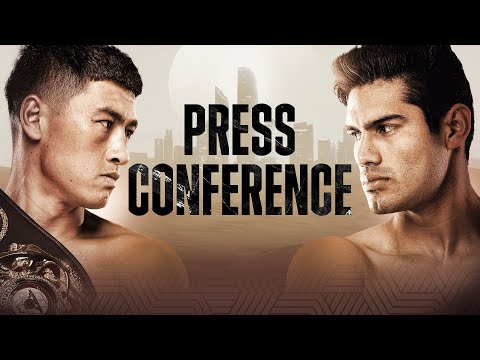 “First of all, thank you very much to Saleh Mohammed. I greatly appreciate the opportunity and for having us here in Abu Dhabi. Abu Dhabi, Matchroom Boxing, DAZN – we appreciate your support and your platform which is bringing the global sport, the sport that we all love to a huge audience.

“Against a fighter in Bivol who is excellent. I love Bivol, his style is bar none one of the best in the business. I believe that Bivol coming off a tremendous win against Canelo, another Mexican superstar, in his last fight was a tremendous showing. He did a great job. But I do have to say that Zurdo Ramirez is no Canelo. Zurdo Ramirez is a fighter who punches in bunches, a fighter who is big and strong and heavy and southpaw. He is going to be very active.

“I was pretty active last night on social media, but for a reason, because we need these big fights to happen. I’m very proud of Bivol, I’m very proud of Zurdo Ramirez for fighting each other, for showing the world and the fans across the world that fighters are not afraid of each other. Fighters are willing to fight the very best. It’s the people behind the scene that must stand up and show up and make sure that we get fans the best fights possible. Thank you DAZN again. Thank you Abu Dhabi, and thank you Eddie Hearn.”

“We established Zurdo as the number one contender. He’s fought back-to-back eliminators, so he deserved this shot. We did a very good job in positioning Zurdo, and now it’s Zurdo’s job to bring the belt back.

“The fact that he [Zurdo] has that killer instinct, and that he wants this so bad, you can see it oozing from out of his eyes. He’s piercing through everything. He wants that big prize against Bivol. Zurdo is calm, cool, and collected – and that’s what you want from a fighter stepping up in competition against someone like Bivol.”

“Hello and welcome back to the main event press conference. This Saturday night at the Etihad Arena live on DAZN around the world, we have one of the best fights in boxing. The beginning of the Champion Series, the start of a new era of boxing here in Abu Dhabi with Matchroom Boxing and the DCT.

“From grass roots, inspiring the younger generation to participate in the great sport of boxing, to developing the amateur scene, World Champions, Olympic Champions from this region. Opportunities for professional fighters to flourish on the global scene. Bringing some of the best fight nights, the best fighters here to Abu Dhabi.

“In my opinion this will become one of premier destinations for boxing and I can’t thank the DCT, everybody in Abu Dhabi enough for their help and support. We’re going to have an incredible crowd on Saturday night at the Emirates Arena, an incredible atmosphere and we cannot wait to get underway.” 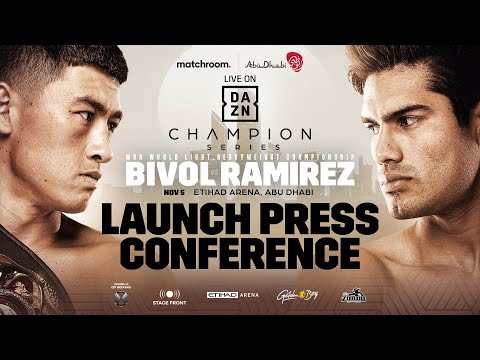