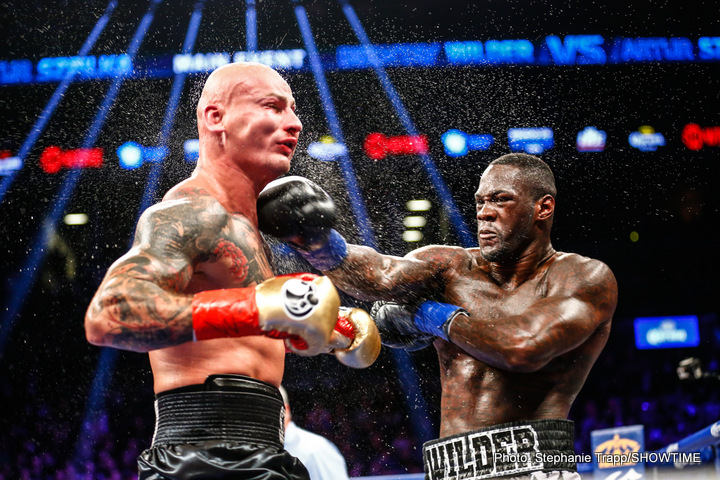 With Deontay Wilder’s potentially exciting mandatory defence against Alexander Povetkin now off – due to the Russian star coming up positive for an illegal substance in case anyone didn’t know – fans are wondering who WBC heavyweight king Wilder will fight next. Next in line in the WBC rankings is Bermane Stiverne, the man Wilder beat back in January of 2015 to take the green belt. Could we soon be seeing a rematch?

That fight would not set fans’ hearts pounding with excitement, but one fight – a unification clash between Wilder and unbeaten Anthony Joshua, the reigning IBF champ – most definitely would. This particular fight won’t happen in the immediate future, but Showtime boss Stephen Espinoza, in speaking with Sky Sports, says he is “optimistic” the fight will get made, in around “12 to 18 months.” Joshua recently signed a long-term deal with Showtime, and Espinoza says the demand for this fight is already huge.

“The number one question I’ve been getting is, ‘when are Deontay and Anthiny going to fight?’ Espinoza said. “I know that in the near future names like David Haye and Tyson Fury and Klitschko, Wilder and (Joseph) Parker are definitely on the agenda. I would love to see that (Wilder-Joshua) fight within the next year and I think it’s realistic to say that, if both continue winning. I’m very optimistic we can get that fight done within the next 12 to 18 months.”

18-months is an eternity in boxing, and as fans know, anything could happen between then and next summer. Povetkin doesn’t figure to go away quietly – with reports saying his team will consider legal action if the shot at Wilder is not honoured – and Joshua will have to deal with unbeaten Dominic Breazeale in June and then the winner of this Saturday’s Parker-Carlos Takam fight after that. Still, Espinoza says, correctly, that even if either Wilder or A.J lost a fight, their match-up would remain a big fight.

In the meantime, though, Espinoza says Joshua will look to expand his fan base by taking a fight or fights in either New York or Las Vegas. It would be good to see Joshua bring back the excitement of a big Las Vegas heavyweight title fight (after he gets past Breazeale, and the odds say Joshua will do so). Big heavyweight shows in Vegas were once commonplace, and hopefully this will become the case once more soon.

Next year, at The MGM Grand, Deontay Wilder Vs. Anthony Joshua: a clash of unbeaten punchers in a unification match. Imagine how big that would be!