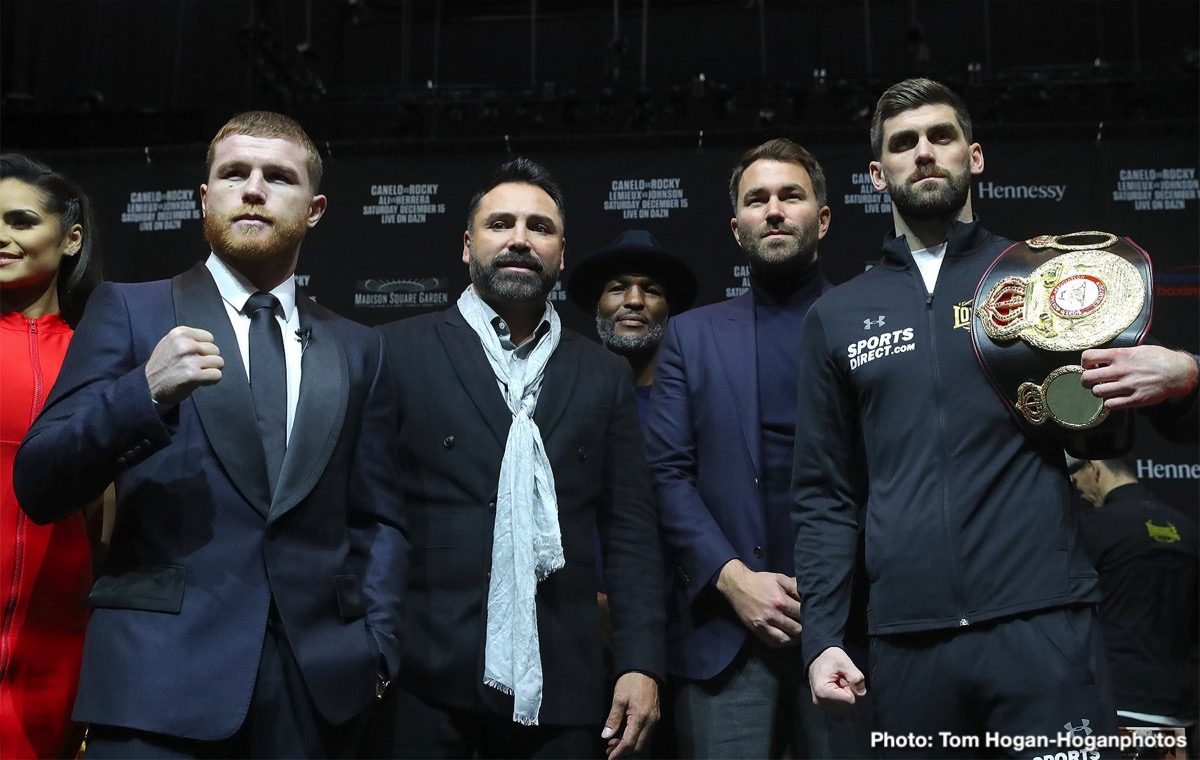 The date of May 4th, 2019 has been reserved for Mexican star Canelo Alvarez’ next fight, to take place at The T-Mobile Arena in Las Vegas. That weekend is of course Cinco de Mayo, so it will be a huge event when Canelo fights. Providing the reigning middleweight champ gets past Rocky Fielding in his foray into the 168 pound weight division tomorrow night, and suffers no injuries that could serve to keep him out of action for anything approaching a significant amount of time, the May 4 fight will be on.

But who will the dance partner be?

Danny Jacobs got plenty of ink earlier this week by calling for the fight, and many fans felt that, yes, this one would be a natural, a good fight, an interesting fight. But writer Michael Woods, as per a piece via Bad Left Hook, says that promoter Oscar De La Hoya has ruled out “The Miracle Man” and said that, no, the IBF middleweight ruler will not be in the opposite corner that night.

“Not in May, not at all, nope. I secured the date in May for Canelo Alvarez, we have no opponent whatsoever, but not Jacobs,” De La Hoya told Woods. “No, it’s (a Canelo-Jacobs fight] never gonna happen, not in May. I have my own plans I can’t reveal them now.”

So, has De La Hoya got an opponent – other than Jacobs (he seems to be as out as can be) – lined up or not? First he tells Woods “we have no opponent whatsoever,” then Oscar says “I have my own plans I can’t reveal them now.” Odd. And why the secrecy? Could it be that Canelo and Gennady Golovkin fight their third fight on May 4 of next year? That seems very doubtful, even if De La Hoya says that third rumble will go down at some stage: “I want to see that fight again,” Oscar said. “Everybody wants to see that again. We’re not sure what GGG is gonna do, we’re obviously not waiting for him. But I definitely want to see that fight relatively soon.”

So not on May 4, then? So again, who could it be for Canelo over the Cinco de Mayo festivities? Woods is not alone in suggesting it could be Canadian powerhouse David Lemiuex, providing the former 160 pound titlist gets past Tureano Johnson on tomorrow’s New York card. That does seem to be a natural fight to make, yes.

Has De La Hoya got other plans, though? Ones we have had no inclination of? Wouldn’t it be bigger than big if Canelo wound up facing Floyd Mayweather in a monster of a rematch on May 4! On second thought, that’s even more of a long-shot than we fans being treated to that third (and hopefully deciding) battle between Canelo and GGG. A much bigger long-shot.

Read: Shoh Ergashev Scores Another First-Round KO on Saturday in Russia
Read: Amir Khan: Canelo Is A Beast, Even If Mayweather Came Back He Would Beat Him
Follow @boxingnews24