Saul Canelo Alvarez’s victory over WBO light heavyweight champion Sergey Kovalev (34-4-1, 29 KOs) last Saturday night took all the limelight off of Andre Ward’s two victories over the Russian fighter. Ward’s two wins over Kovalev ended in controversy. You can’t say that about Canelo’s win over Sergey. He made sure there was no controversy at all in stopping him.

Canelo landed a peach of a right hand to the head of the 36-year-old Kovalev to knock him out in the 11th round and make history at the MGM Grand Garden Arena in Las Vegas, Nevada. It was the kind of victory that boxing fans will be speaking about for years.

Canelo fight would be a huge payday for Ward

Ward’s career best wins wins came against Kovalev. That’s the fight that made Ward look great in the eyes of a lot of boxing fans. Now Ward’s accomplishment is no longer that spectacular, as Canelo Alvarez (53-1-2, 36 KOs) did a better job of beating Kovalev.

Ward’s former trainer Virgil Hunter said recently that if he did make a comeback for a Canelo fight, he would want him to have a couple of tune-up bouts beforehand. Unfortunately, that’s not feasible. Ward would have to tough it out by taking the fight with Canelo WITHOUT a tune-up if he wanted to get it. Canelo wouldn’t likely wait a year for Ward to get the tune-ups out of the way before fighting him. Besides, there isn’t anyone that would be nearly good enough for Ward to fight in warm-up matches that would prepare him for the talent of a fighter like Canelo.

The win by Canelo now puts pressure on Ward to make comeback to face the Mexican star to show that he’s not in his league. At 35, Ward is younger than Kovalev and 37-year-old Gennadiy Golovkin. There’s no reason for Ward not to come back, because he’s younger than those guys. Ward would make MILLIONS in facing Canelo. The payday that Ward would get fighting Canelo would likely be far more than what he earned in his two fights with Kovalev in 2016 and 2017. 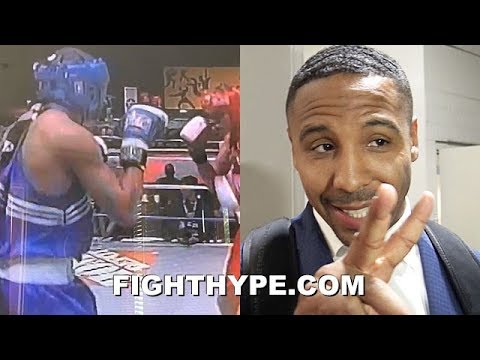 Ugas: Ward would make tens of millions against Canelo

Welterweight contender Yordenis Ugas is one of many people who want to see Ward return to the ring to face Canelo.

“You have the best or one of the best fighters in the sport, and it would be a great fight,” said Ugás to ESPN Deportes. “[This fight] would leave you tens of millions of dollars. Come on, man, cheer up!”

The thing is Canelo would likely agree to fight Ward if he showed interest in fighting him. Most boxing fans expect Canelo to avoid a fight against the light heavyweight champions Artur Beterbiev and Dmitry Bivol, because they hit too hard and have too much of a size advantage over him. Canelo was neck and neck with Kovalev until stopping him in the 11th round.

Ward is someone that would be a safe pick for Canelo, because he’s not a big puncher. The only thing Canelo would have to worry about with Ward is the wrestling and potentially a low blow if one of his shots to the midsection strays low like we saw in his second fight with Kovalev.