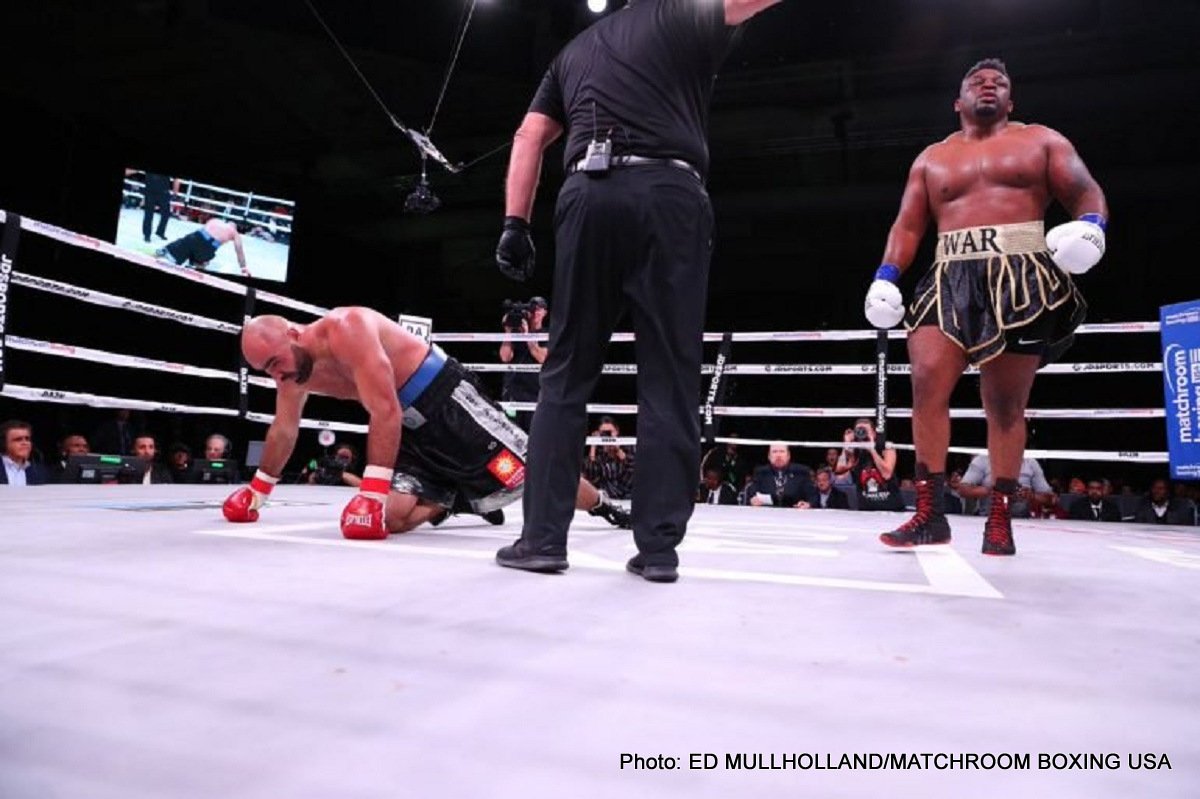 As was widely expected, Jarrell Miller had too much for a game but outgunned Bogdan Dinu last night in Kansas. 315 pound Miller wore down the unbeaten but also untested Romanian, eventually smashing him to defeat with just seconds to go in round-four. Having had his third fight of this year, Miller is in need of far stiffer tests. Now 23-0-1(20), the 30 year old from Brooklyn seems to feel this way himself.

After despatching Dinu, now 18-1(12) the big man known as “Big Baby” called out quite a few names, most of them British heavyweights.

“We’re just trying to work out what to do next,” a victorious Miller said on DAZN. “We want AJ but he’s a little busy, if Dillian Whyte gets past Dereck Chisora, I want one of them. But I heard about Trevor Bryan, an unbeaten fighter, so I can knock out unbeaten fighters. Let’s see if Trevor Bryan picks up his phone, I will knock his behind out as well. It’s about time I knocked out a Brit. The Brits right now are top of the list and there’s just me and Deontay as the two undefeated American guys and Deontay’s fighting a Brit. He’s called out AJ by Tyson Fury stepped up, so if I can’t get AJ, I’d like to take Dillian Whyte, Dereck Chisora, even a David Allen or a David Price.”

A fight between Miller and Bryan would be interesting. Bryan won a version of the WBA heavyweight belt earlier this year, yet we don’t know how good he really is. As for Whyte and Chisora, either man would make a great opponent for Miller, but the winner of the December 22 rematch between these two will be calling for a shot at Joshua himself, and how many “final eliminators” must Whyte win before he gets his shot?

Look for Miller to stay active, keep busy and eventually get that big title chance, either against AJ or maybe Wilder (if he can get past Fury on December 1). Then we will find out just how good Miller, the biggest heavyweight in the world today, really is. It sure would be good to see Miller fight here in the UK though. As Miller said, it’s up to Eddie Hearn to come up with a game-plan.