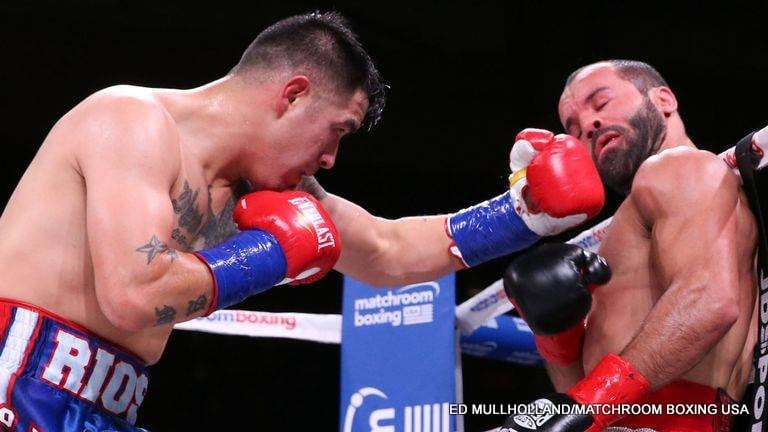 Once a warrior, always a warrior. Former WBA lightweight king Brandon Rios showed last night how he is not quite finished just yet. “Bam Bam” put on a relentless performance in stopping Ramon Alvarez, brother of middleweight champ Canelo Alvarez, scoring an entertaining ninth-round TKO. Now 35-4-1(26), Rios had his first fight under new promoter Eddie Hearn. Alvarez, who had won his last three, falls to 27-7-3(16).

Rios suffered a quite brutal stoppage loss to Danny Garcia in February of this year, and many people felt the welterweight should think long and hard about calling it a career. But the 32 year old from Oxnard had other ideas. Still pretty fast, still having plenty of fire in his belly and still dangerous, Rios has also retained the affection of the paying fans. Rios always gives his all, win or lose. Alvarez is not an elite fighter but the Mexican had only been stopped twice previously and he was on a winning roll.

Rios though, threw a ton of punches and he simply refused to take no for an answer. Rios almost got the stoppage sooner than he did but Alvarez dug in and battled back as hard as he could. So, how much has Rios got left? The word is, Hearn is looking to match Rios with unbeaten 24 year old Josh Kelly of Sunderland in the UK. Kelly next faces a former titlist in David Avanesyan on December 8. Rios, if he gets this fight, will be in no mood to allow the up-and-comer to add his name to his resume.

Rios has given us some great action fights during his thrilling career, his wars with Mike Alvarado, Diego Gabriel Chaves and others sending the fans home happy. And there could be yet more action fights to come from Rios. He may not have long left, but Rios might have enough left to be able to bank another good payday or two. And we all know Rios deserves it. UK fight fans would certainly welcome Rios to these shores.