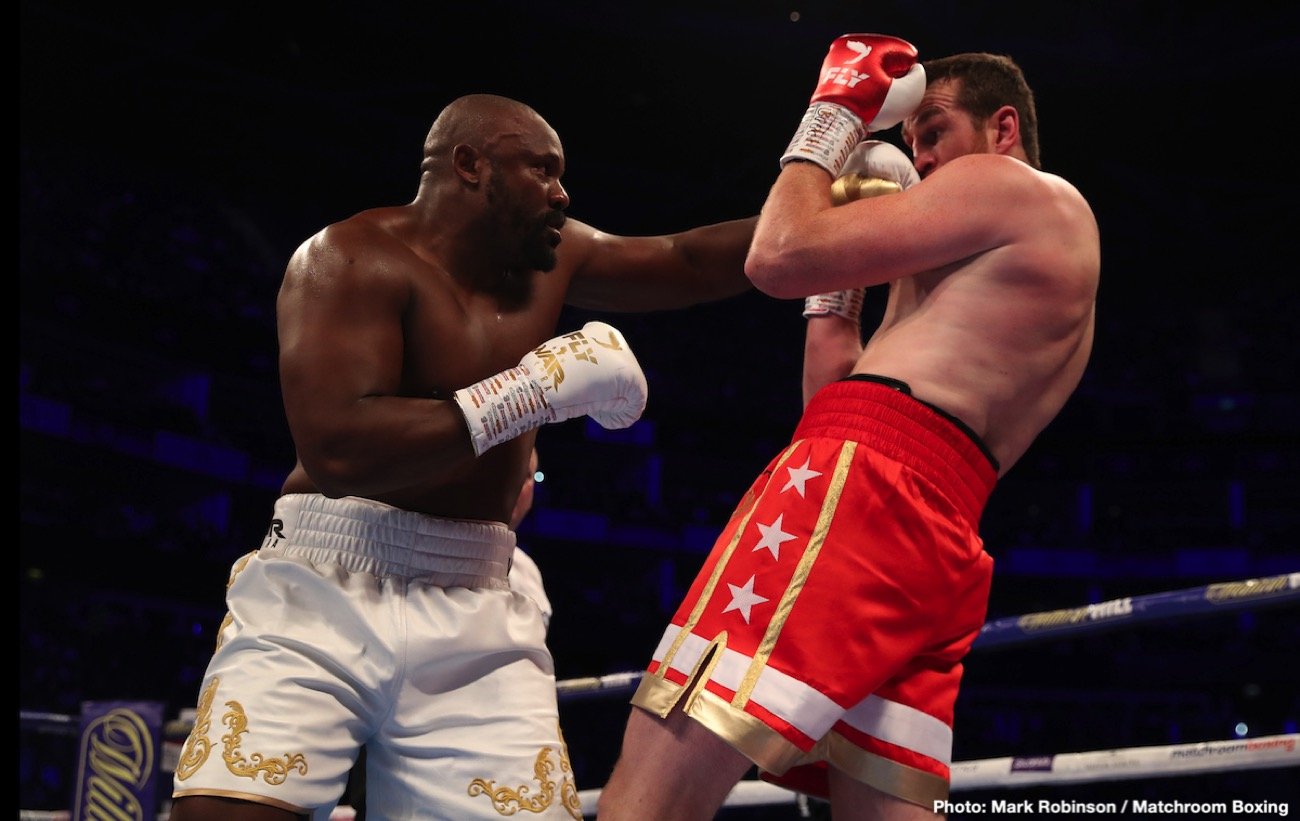 Dereck Chisora keeps on rolling. Last night’s thrilling-while-it-lasted rumble with David Price, won by “War” in the fourth-round when Pricey’s corner wisely threw in the towel, allows the 35 year old slugger to call for another big fight, and Eddie Hearn is going to try and make it. Speaking with IFL TV after last night’s superb card at The O2 in London, the promoter said he wants to make a “heavyweight card” for next February, and that Chisora, and possibly Oleksandr Usyk, Dillian Whyte, the Alexander Povetkin-Michael Hunter winner, Joseph Parker, Filip Hrgovic and Dave Allen, could all feature.

In terms of who Chisora might fight next, Hearn, with a smile, ruled out Chisora fighting Jarrel Miller on the Ruiz/Joshua II card in Saudi Arabia (Chisora has apparently asked for that fight) and said he would like to see Chisora fight either Parker or Usyk next. Usyk has instructed Hearn that he wants a world heavyweight title shot in his next fight, so unless he changes his mind and agrees to have a second intro into the heavyweight division, and that he accepts Chisora’s challenge, it could be Chisora-Parker next.

Parker of course was suppsoed to be the guy in the opposite corner last night, only for a spider bite of all things to force the former WBO champ to pull out of the fight. Maybe Parker will be ready and willing to come back to the UK in four months. Whoever Chisora fights next, it promises to be a fight well worth watching. Chisora has looked good in his last two fights: icing Artur Szpilka and now taking care of (perhaps retiring, for good) Price.

Bottom line, paying fans know what they’re gonna get when Chisora, 32-9(23) fights: action – and a whole lot of leather thrown, even if not all of it lands on its designed target. Chisora fights like a man possessed, his seek and destroy style sometimes succesful, other times not. But aside from the odd dud when Chisora was listless (against Agit Kabayel and Kubrat Pulev), its been action all the way, win or lose.

Would the heat Chisora is capable of bringing prove too hot for Usyk? For Parker? Hearn, like many of us, wants to find out. Roll on that heavyweight card that is currently formulating in Hearn’s mind.