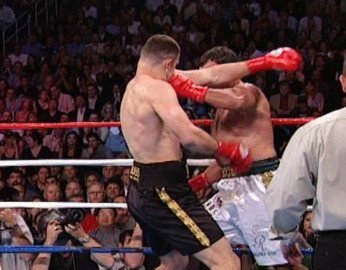 By Michael Collins: WBC heavyweight champion Vitali Klitschko has a great deal of respect for former WBO heavyweight champion Corrie Sanders (42-4, 31 KO’s), who was murdered in South Africa this past weekend by three unknown thugs that robbed the restaurant where Sanders was celebrating a party.

Vitali said to the German news site Bild Plus “Corrie Sanders was my most difficult opponent I ever fought. Corrie was fast, could give and take a punch. His style was dangerous and did not suit me. I was very pleased to be able to win this fight.”

Vitali stopped Sanders by an 8th round TKO to avenge his brother Wladimir Klitschko’s 2nd round knockout loss to Sanders a year earlier in 2003. Wladimir never fought Sanders again after the loss and it’s perhaps wise that he didn’t. Sanders seemed to really have Wladimir’s number and it might have been a bad idea for Wladimir to fight him again. Sanders almost knocked Vitali down at one point after connecting with a big left hand when Vitali tried to slug with him.

There still hasn’t been any arrests in the Sanders murder case but the police are looking for the three gunman.

According to supersport.com, Sanders shielded his daughter from the gunman’s bullets by placing his body in between the gunman. Sanders was hit by a bullet in the abdomen, and then later died following surgery at the Kalafong hospital on Sunday. Sanders was the only one hit by a bullet during the three gunman’s spraying of the restaurant with bullets.

This Saturday night, WBA World heavyweight champion Alexander Povetkin (24-0, 16 KO’s) will be defending his title against his #1 WBA contender Hasim Rahman (50-7-2, 41 KO’s) in what shapes up to be a mismatch at the at the Sporthalle, Alsterdorf, in Hamburg, Germany. Some boxing fans who haven’t keeping up with things may assume that Rahman is the same fighter that he once was early in his career when he pulled off a huge upset win over Lennox Lewis. However, that was many years ago and Rahman is well past his prime now.

He’s a guy that hasn’t faced a top tier opponent in four years and has been dining on weak opposition since his loss to Wladimir Klitschko in 2008. Why the World Boxing Association decided to rank Rahman number #1 is anyone’s guess. Perhaps it was for old time’s sake or who knows? But one thing is clear Rahman has little chance of beating Povetkin, and I imagine he’s very happy that the WBA has given Rahman such a high ranking.

The positive about this is Povetkin gets an easy title defense against opponent in Rahman, who probably should be ranked in the 40 instead of #1. Like I said, the WBA has given Povetkin a big favor in ranking Rahman so high. Sadly, this is Povetkin’s mandatory challenger, so after he takes care of Rahman, Povetkin will be taking an easy optional title defense against possibly #11 Jovo Pudar. His names has been mentioned as the likely next title defense for Povetkin. Yes, it looks like Povetkin looking past Rahman, but who can blame him.