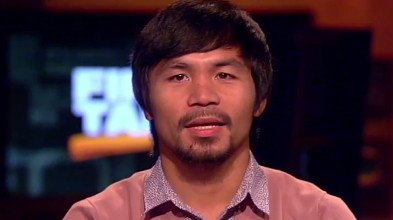 By Rob Smith: With Manny Pacquiao’s performances looking less and less impressive with each fight, Pacquiao now has to look especially good for him to be still considered as one of the best fighters in boxing. Getting beaten and/or winning controversial decisions isn’t helping him. You can’t look at Pacquiao’s last three performances against Shane Mosley, Juan Manuel Marquez and Tim Bradley and Pacquiao as a superstar type fighter. He lost to Bradley and should have to Marquez.

That’s two defeats in his last three fights. That’s terrible. While some boxing fans feel that Pacquiao deserved a win over Bradley last June, Pacquiao’s performance in that fight wasn’t superstar type material. Pacquiao just looked like an old guy that could no longer fight hard for three minutes of every round, and who also couldn’t cut off the ring to save his life.

If for no other reason that they can’t find another big money opponent to put him in with, Pacquiao will be fighting Juan Manuel Marquez on December 8th. With the Top Rank – Golden Boy rivalry limiting the number of options Pacquiao has in terms of opponents, sadly he’s reduced to fighting the same guys over and over again. The casual boxing fans don’t seem to mind because they don’t have the memory of all the times that Pacquiao has already fought Marquez. But hardcore boxing fans do and they’re getting a little tired of this fight.

Pacquiao has got to look especially good against Marquez in this fight, because Pacquiao can’t win another controversial decision that boxing fans see as another gift for him against Marquez. If that happens then Pacquiao will continue to lose status in the eyes of boxing fans. His last two fights were incredibly bad, but he and his trainer Freddie Roach seem to believe they can get him back to the level that he was back in 2004 when he was at his best. I don’t buy it. If that were possible then Pacquiao would have already been fighting at that level in his last few fights, but that’s not the case. He’s looking slower and his work rate is down.

Tokyo ’64 – When The Great Joe Frazier Refused To Let A Little Thing Like A Busted Thumb Prevent Him From Winning Gold370 Total Shares
Manny Pacquiao vs Errol Spence Jr. What Would A Win Or A Loss Do For Their Legacies?244 Total Shares