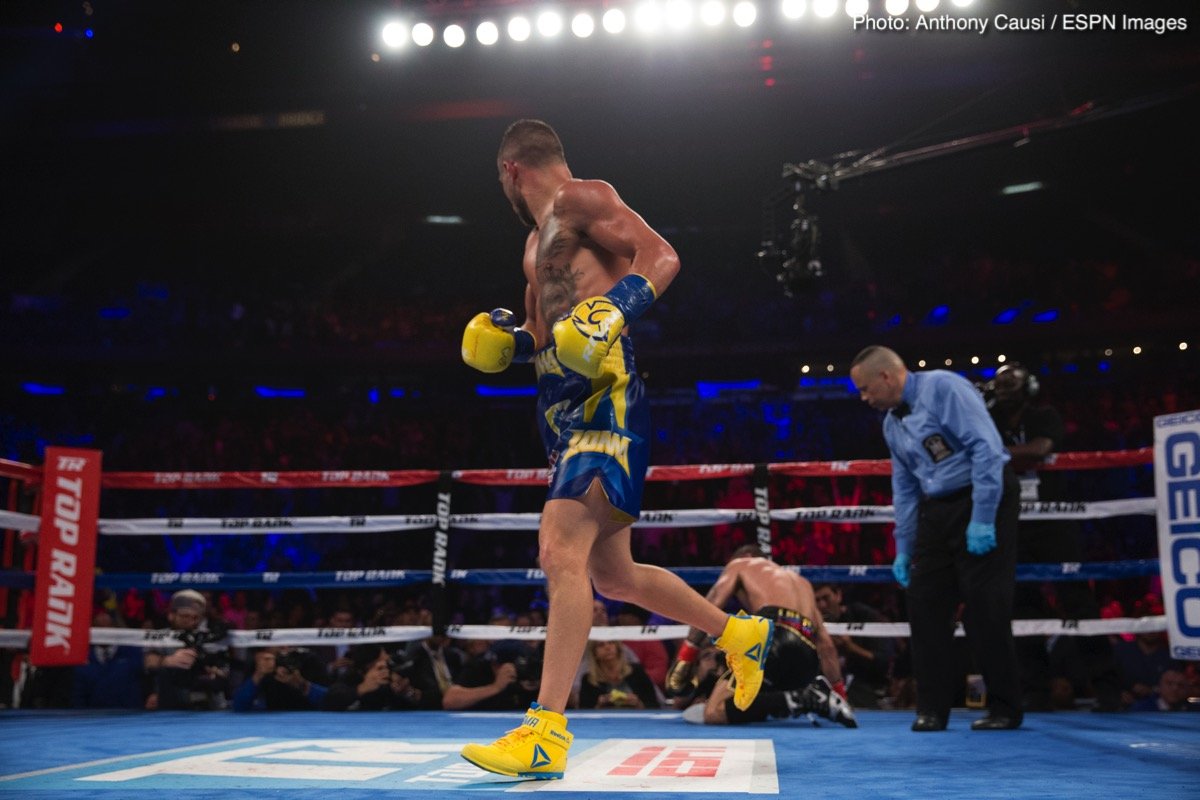 When you are as good, as great as Vasyl Lomachenko, you can afford to look past an upcoming fight and eye up an even bigger prize. No disrespect to Jose Pedraza, who Loma will fight next – on December 8 in a WBA/WBO lightweight title fight unification clash – but this seems to be just what the reigning pound-for-pound king is doing right about now.

Speaking on Sky Sports’ toe to toe podcast, the supremely gifted Ukrainian southpaw said that after he defeats Pedraza (to be fair, Lomachenko actually said “if I beat Pedraza”) he will look to 2019, and a big fight with Mikey Garcia. Lomachenko, 11-1(9) said he thinks he will get to fight Garcia – arguably his most testing challenge at 135 pounds – and that it will be “winner take all;” as in the winner would walk away with all four belts at 135, along with the Ring Magazine belt Loma currently holds.

“My next fight in December is with Pedraza to unify titles, after this we can talk about 2019,” Lomachenko said on the podcast. “I think it will be Mikey Garcia because he has two titles and the winner takes it all.”

Lomachenko added that he plans to stay at 135 for the time being, and that after that he may look to move up, maybe even move down in weight, depending on how his body feels at the time – “depends on how I feel and my size, nobody knows what will happen over the years.” But first, the man known as “Hi Tech” wants to unify his current weight division. Garcia, 39-0(30) and the reigning IBF and WBC lightweight king, still wants that big, big fight with IBF welterweight champ Errol Spence Jr (though talk on this front does seem to have gone quiet as of late), but as much as that brave (or foolhardy) move up in weight would prove interesting, the fight fans really want to see is Lomchenko Vs. Garcia.

Loma says he wants the big fights, the testing fights, and maybe Garcia, last seen proving too much for Robert Easter, is the man to bring out the best in the p-4-p best today; and vice-versa. Might Loma bring out the very best in the superb Garcia; a man who has yet to lose a single fight?

It’s up to Lomachenko, fresh from surgery on his shoulder and the following rehab, to show against Pedraza that he is back at his best, that nothing has changed. Then it will be up to the promoters to thrash out a deal and make Lomachenko-Garcia. Pedraza will, of course, have other ideas come December 8th. But if it does happen in 2019, Lomachenko Vs. Garcia will be one hot ticket.

Leonard vs Hagler: The Most Re-Watched, Re-Scored Fight In History437 Total Shares

Leonard vs Hagler: The Most Re-Watched, Re-Scored Fight In History437 Total Shares